An area homeless shelter has some bright new paint on its walls thanks to the generosity of a local business.

On Thursday, June 6, employees of the Sherwin-Williams Company of the Lehigh Valley chose the Allentown Rescue Mission for their annual community paint project, according to a news release from the shelter’s development manager, Rosaria Stoops.

“The front office of the Allentown Rescue Mission welcomes the homeless for shelter and assistance,” it noted, and “the friendly faces at the front desk greatly appreciate the freshly-painted atmosphere.”

The Sherwin-Williams Company of the Lehigh Valley is headquartered in Allentown and has 13 locations.

Sherwin-Williams said it chose the Allentown Rescue Mission as the beneficiary of its project because the organization is a tremendous resource to the community, providing assistance to homeless men and working to combat chronic homelessness.

“The mission is more than a shelter,” said Chris Crocker, District Sales Manager for Sherwin-Williams. “It provides a path of transition to a better place in life.”

Sherwin-Williams–which has a store on Rt. 378 in Lower Saucon Township–donated all of the supplies for the project, the news release noted.

The Allentown Rescue Mission news release said Sherwin-Williams of the Lehigh Valley should be commended because the company “believes in the necessity of providing their employees with the opportunity to make a difference as volunteers in their community.” 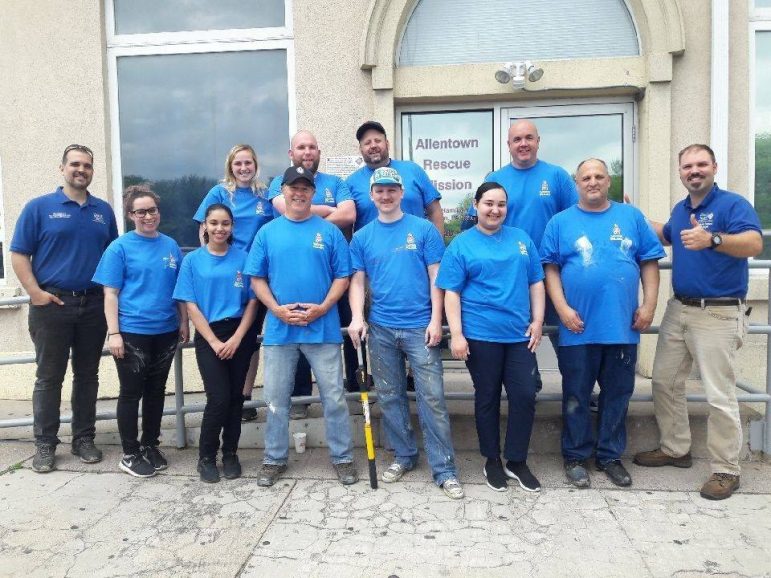 Sherwin-Williams of the Lehigh Valley employees who participated in the community paint project stand in front of the Allentown Rescue Mission, which is a men’s homeless shelter located at 355 Hamilton Street, Allentown.