At the Lower Saucon Township Council meeting Wednesday, Police Chief Thomas Barndt introduced three officers who were recently promoted from within the department.

After the introduction family members of the three police officers participated in a ceremonial badge pinning. 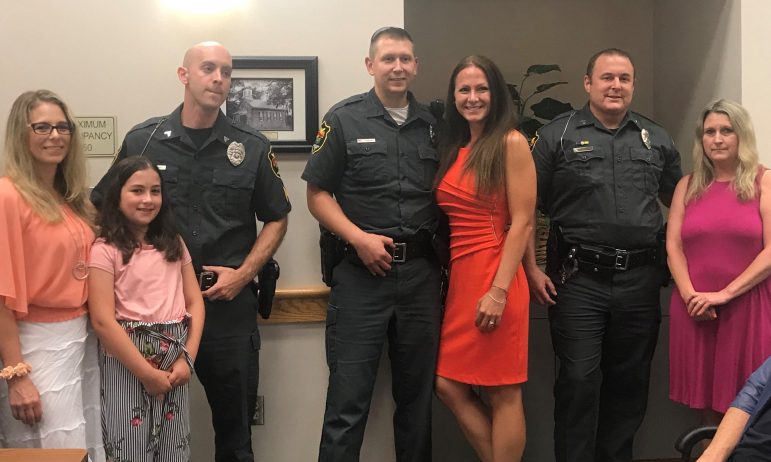 From left, Det./Cpl. Eric Marth, Ofc. Jared Gunshore and Sgt. Christopher Leidy with their family members following a badge-pinning ceremony that was held at the July 17 Lower Saucon Township council meeting. All three township police officers were recognized for their recent promotions at the ceremony.

Sgt. Leidy graduated from the Allentown Police Academy in 1993. He was hired as a part-time police officer in 1997 and then promoted to full-time in 1998.

Det./Cpl. Eric Marth graduated from Desales University in 2005 with a bachelor’s degree in criminal justice.

In 2008, he graduated from the Allentown Police Academy and was hired full-time as a patrolman by the Lower Saucon Township Police Department later that year.

In 2010, he became a criminal identification officer responsible for processing crime scenes for his patrol team, and he has been assisting with investigations since 2016.

Additionally in 2016, Det./Cpl. Marth became a bike officer, and graduated from Desales University with a master’s degree in criminal justic, with a concentration in investigative forensics.

Ofc. Jared Gunshore graduated from the Allentown Police Academy in 2009.

In 2010, he was hired full-time with the Lehigh County Sheriff’s Department.

Ofc. Gunshore was then hired as a part-time police officer in Lower Saucon Township in 2011, and remained part-time until his recent promotion to full-time.