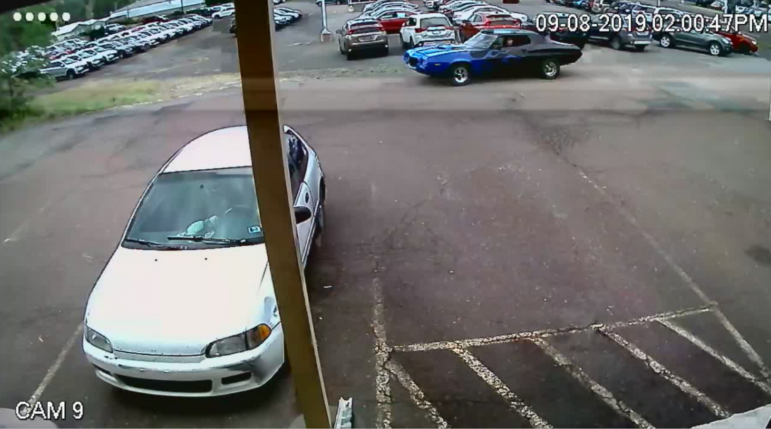 Richland Township Police Wednesday released this surveillance photo of a classic car (pictured at upper right) which they say was involved in a hit-and-run crash outside the Adult World adult bookstore on Rt. 309 on Sunday, Sept. 8. Police are asking the public to help them identify the driver.

In a post on the department’s Crimewatch page, police said the driver of the vehicle that was involved in the crash was a white male, possibly in his fifties.

Police said the man “arrived at the Adult World in his dark-colored vehicle with blue flames classic vehicle” and went inside the business.

While the man was in Adult World, police said the vehicle rolled backward and struck a vehicle in the adjacent Quakertown Mitsubishi parking lot.

Police said that when the male exited the adult bookstore, he got in his vehicle and left.

“The vehicle is very distinctive with the color scheme and flames,” police said. Anyone with information about it or the driver is asked to contact Ofc. Mike Colahan at 215-536-9500 or call the department’s anonymous tip line at 215-536-6967.

A closeup view of the distinctive vehicle Richland Township Police say was invovled in a hit-and-run crash outside Adult World Sept. 8.