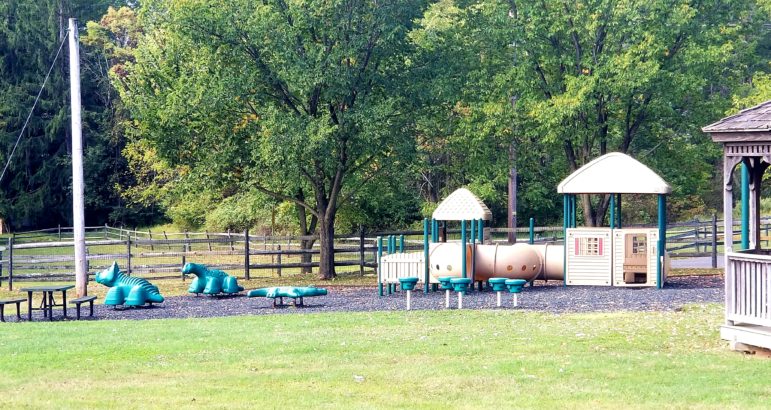 The playground at Town Hall Park is one of two in Lower Saucon Township that will be upgraded with inclusive equipment and new safety features such as rubberized mulch, with grant funding that was announced Wednesday.

State Rep. Justin Simmons (R-131) announced Wednesday that two improvement projects in his district will benefit from an additional $170,000 in state funding recently approved by the Commonwealth Financing Authority (CFA) in Harrisburg.

One of the projects is in Lower Saucon Township, which was awarded a $25,000 grant for the installation of inclusive playground equipment at Polk Valley Park and Town Hall Park, a news release from Simmons’ office said.

As a further safety measure, ADA-compliant rubber mulch will also be installed at both playgrounds. The total project cost is $31,905, according to the news release.

Also receiving funding is the Borough of Coopersburg, which was awarded a $145,000 grant to renovate the southeast corner of E. State and Main streets, which is the central downtown intersection.

“The project consists of a full rebuild of the site, including the installation of new landscaping, pavement and a flagpole,” the news release said. “These improvements will make downtown Coopersburg a more natural gathering place for borough residents.”

“Both of these municipalities have worked tirelessly for the completion of their recreation improvement projects and I am pleased the CFA saw fit to assist them in their efforts,” said Simmons. “This funding will go a long way in improving these sites and making the 131st District a safer and more enjoyable place to live and play.”

It is supported by the Marcellus Legacy Fund established by Act 13 of 2012.

The 131st Legislative District includes part of Lower Saucon Township, as well as much of southern Lehigh and northern Montgomery counties.