Fountain Hill Borough had a Facebook page that for all intents and purposes appeared to be an official social media arm of the tiny municipality. But it wasn’t functioning as an official page, according to borough council, because it wasn’t administered by borough staff under their oversight.

The Borough of Fountain Hill page was updated by Mayor Carolee Gifford, who until recently used it to share everything from information about upcoming community-wide events to particular council meeting agenda items she felt the public should know about.

Two posts which drew considerable attention from residents over the summer were about a proposed change to the policy regulating restroom use at the municipal swimming pool, and later a highly divisive proposal to consider partially supplementing borough police coverage with state police coverage due to budget issues the borough is facing.

After using the page to help rally support for the police, Gifford was ordered last month to stop using it due to a disagreement with council members about how she was using it to frame the police department issue for those following it.

“We never intended to get rid of the police department, but (the dialogue) got out of hand because of ‘you know who,'” councilman Fran Ferencin said at a meeting Monday, in an apparent reference to Gifford.

In a post on the since-deactivated page published after council’s Sept. 18 meeting, Gifford defended her use of it. 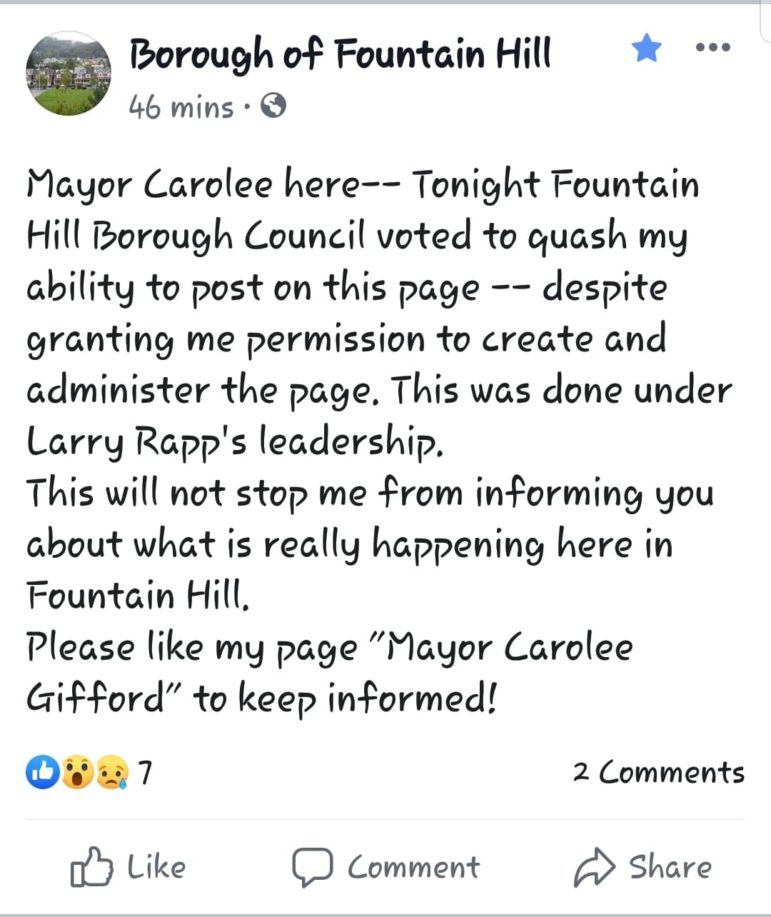 A screenshot of the post Fountain Hill Mayor Carolee Gifford made on the since-deactivated Borough of Fountain Hill Facebook page, after borough council ordered her to stop using it Sept. 18. Gifford vowed to continue to use social media to help borough residents “keep informed.”

“Mayor Carolee here,” she wrote. “Tonight Fountain Hill Borough Council voted to quash my ability to post on this page–despite granting me permission to create and administer the page. This was done under (former borough council president) Larry Rapp’s leadership.”

Gifford then vowed that the decision “will not stop me from informing you about what is really happening here in Fountain Hill” and asked followers to like a new page she created called Mayor Carolee Gifford in order to “keep informed.”

Gifford is also the administrator for a closed Facebook group called Fountain Hillers, which as of Tuesday had 340 members. As of Tuesday her Mayor Carolee Gifford page had close to 300 followers.

“I think it’s a good idea for us to get possession of the page,” council president Leo Atkinson said at Monday’s meeting. “There were something like a thousand people there (as followers).”

Councilwoman Annamarie Jordan said she would like council to adopt a formal social media policy before anyone from the borough begins using social media again.

“You’re right back where you started without that,” she said.

Atkinson agreed, and said he believed the borough should take possession of the page but refrain from using it for disseminating official information until a social media policy is adopted.

Council unanimously approved a motion to take back the page and to pursue adoption of a policy for the use of Facebook and other social media before it is put into use.

Gifford was absent from the meeting.

In other business at the meeting, it was announced that Trick-or-Treat in Fountain Hill this year will be held Friday, Oct. 25 from 6 to 8 p.m. The fire department will be giving out candy at the fire station on Cherokee Street, but won’t be hosting a haunted station, councilman Philip Trabel said.