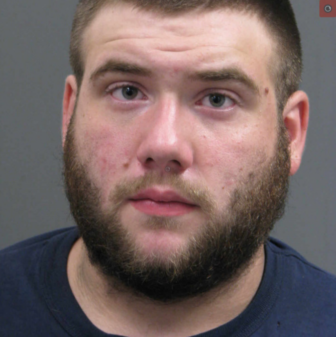 William Franklin Snyder Jr., 20, of Telford, is wanted by Lower Saucon Township Police on access device fraud and other charges.

A warrant has been issued for the arrest of a 20-year-old Telford man who is accused of using bank cards stolen in Lower Saucon Township last month at “multiple locations.”

Police said the “numerous” bank cards were stolen along with a laptop case, tote bag and wallet from an unlocked vehicle in the 1900 block of Penrose Street on Sunday, Oct. 27, 2019.

Police added that Snyder was identified as the suspect in the theft following a review of surveillance footage at the locations where the bank cards were used.

Authorities are asking for the public’s assistance in locating Snyder, who is described as white, five feet 10 inches tall and 250 pounds, with brown hair and brown eyes.

Anyone with information regarding his whereabouts is asked to call the Lower Saucon Township Police Department at 610-317-6110 or to submit a tip via the Crimewatch site.