Fruit is displayed in a geometric pattern on the eave above the front porch at Heintzelman Funeral Home on Main Street in Hellertown. Owner David Heintzelman said the display is a traditional symbol of hospitality that adds a splash of color during an otherwise dreary time of year.

An eagle-eyed Saucon Source reader this week alerted us to something unusual on Main Street in Hellertown: fruit–or rather, representations of fruit–affixed to the front of a prominent borough business.

Heintzelman Funeral Home owner (and Hellertown mayor) David Heintzelman explained that the triangular decoration on the eave of his building’s front porch is actually a traditional, symbolic way of welcoming guests that dates to the Colonial era.

“I saw it at (former Pennsylvania) Governor Tom Corbett’s residence in Harrisburg when I was a visitor,” Heintzelman said.

He noted that while the fruit used to decorate the outside of the governor’s mansion was real, the lemons, apples, oranges and pineapple on his edifice are made of plastic, since real fruit would have been too heavy.

The artisan responsible for the unique display is Tom Link, Heintzelman said. He added that the creation was something that had been “on my bucket list for a few years.”

Visitors to Southern states as well as the New England area may have seen something similar to the display at the funeral home in their travels.

“I love the magnificent colors that blend and compliment my building,” Heintzelman said, adding that the display could become a year-round decorative element. “It’s something different to add conversation in the community, which it has generated.” 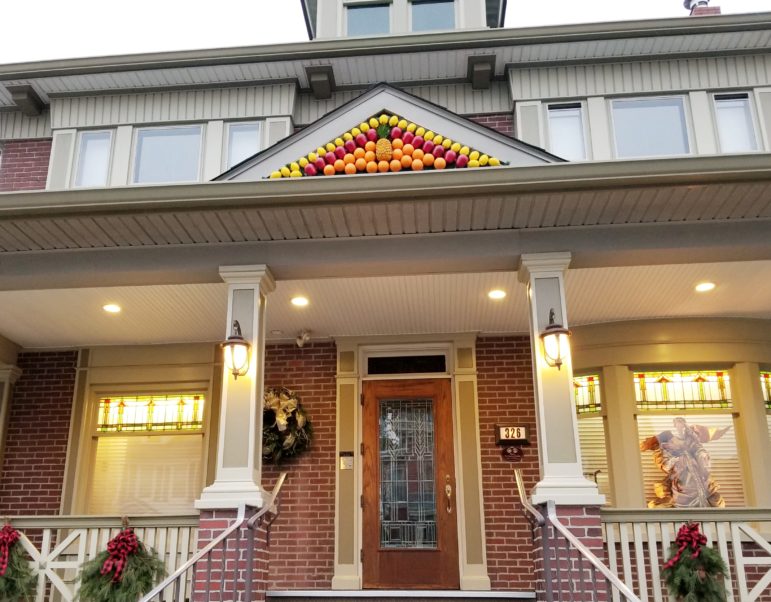 Heintzelman Funeral Home is located at 326 Main Street in Hellertown. The business is known for its seasonal outdoor displays which include a large Christmas tree during the holidays and bountiful harvest decorations each fall.