The first confirmed death of a Southern Lehigh resident due to the COVID-19 virus was announced Friday afternoon by Lehigh County officials.

In a news release by Lehigh County Coroner Eric Minnich, it was announced that a resident of Upper Saucon Township is one of 41 county residents who have lost their lives to the virus. That total reflects a significant increase from Thursday, when the total number of deaths in Lehigh County was 29, state officials announced earlier Friday.

The other totals by municipality according to the county coroner are as follows:

Minnich said the average age of those who have died from the illness in Lehigh County is 78. Fifty-four percent of them were male and 46 percent of the decedents were female. 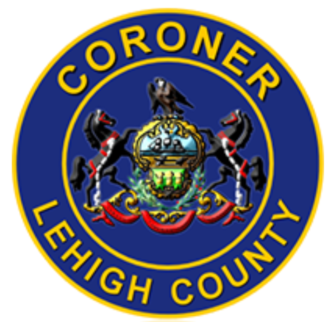 The government seal for the Lehigh County Coroner.

In a post on the county’s Facebook page, it was noted that the total shared by Minnich does not include Lehigh County residents who may have died in another jurisdiction.

“The…information fits epidemiological standards while protecting the privacy of those who have passed,” the county said. “It is with this record that we hope to inform Lehigh County residents of the spread of COVID-19 and how it has affected our community.”

Lehigh County as of Friday had nearly 2,100 confirmed cases of the novel coronavirus, according to the Pennsylvania Department of Health, which reported that 5,441 county residents had tested negative for COVID-19.

Lehigh County has the fourth highest number of confirmed COVID-19 cases in the state, after Philadelphia, Montgomery and Delaware counties. However, it currently has the highest infection rate out of all of Pennsylvania’s 67 counties, according to an interactive map developed by the New York Times. The map Friday put the total number of cases per 100,000 residents in Lehigh County at 576.9. All of the counties with high infection rates are located in eastern Pennsylvania, and include:

On Friday, Pennsylvania governor Tom Wolf announced a plan to help the state recover from the COVID-19 pandemic, which in addition to being a health care crisis has also created record unemployment in a very short period of time.

Wolf said in a news conferenced that his “plan for relief, reopening and recovery…will keep Pennsylvanians alive and repair the damage this virus has caused across Pennsylvania.”

The three-phase outline for the plan is available on Wolf’s website.

According do data on the pandemic tracking website Worldometer, the U.S. recorded 32,165 new cases of COVID-19 on Friday, which was the greatest number of new cases since April 10. A total of 2,535 new deaths were also reported, according to Worldometer.

Pennsylvania is consistently among the top five U.S. states for the number of confirmed cases, and as of Friday had just shy of 30,000 cases of COVID-19 and 957 deaths from it.

The four states with more cases as of late Friday were:

The entire state of Pennsylvania remains under a stay-at-home order until at least April 30, with most businesses and all schools closed to help stop the virus’s spread.

As of Sunday, April 17 at 8 p.m., all employees as well as customers who visit essential businesses–with few exceptions–must wear a mask or face covering to help stop the spread of the virus, under an order signed by state health secretary Dr. Rachel Levine.

Wolf and Levine continue to urge residents to stay home unless they must go to work at an essential business or perform a “life-sustaining” task such as buying food or picking up medication. Most parks and trails remain open, however six feet of distance is required between individuals in all public spaces, according to virus mitigation guidelines.