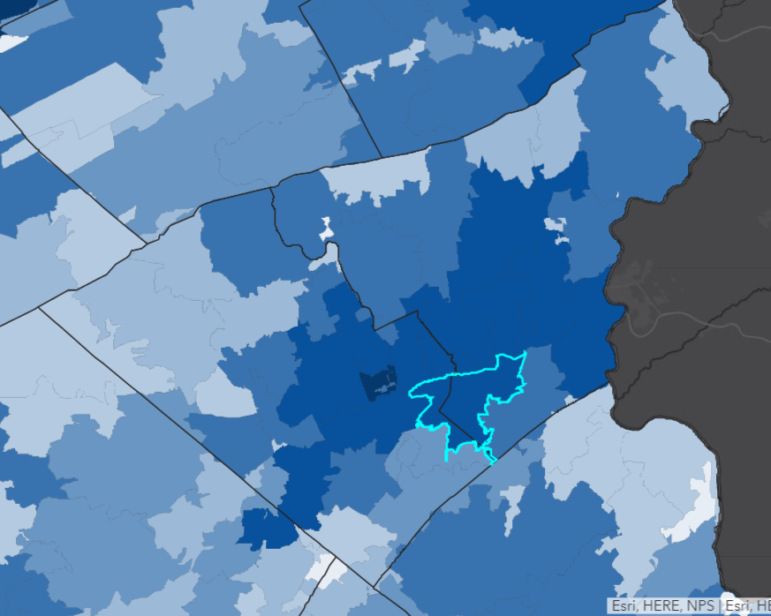 A portion of the Pennsylvania Health Department’s new COVID-19 map is color-coded to identify the number of cases of the disease in the zip codes that cover Lehigh and Northampton counties. The darker the shade of blue, the higher the total number of cases in that zip code is.  The highlighted zip code in the screenshot above is 18015, which straddles the Lehigh County line and includes Fountain Hill Borough, South Bethlehem and parts of Salisbury Township, Lower Saucon Township and Upper Saucon Township. All residents of the 18015 zip code have a “Bethlehem” mailing address.

Many people are curious to know about COVID-19’s prevalence in their community. Due to privacy laws, state officials can only release a limited amount of information about the caseloads they’re tracking, which means there has been little public data available to date.

A new interactive map developed by the Pennsylvania Department of Health, however, does more to highlight the disease’s prevalence at local levels by identifying the number of people who have tested positive for it in each of the state’s roughly 2,200 zip codes.

The zip code data map is color-coded in shades of blue to indicate where the highest number of COVID-19 cases are located. Not surprisingly, those zip codes are primarily in eastern Pennsylvania, which is where the state’s first cases were documented in late February.

Lehigh County continues to have the highest concentration of COVID-19 cases among Pennsylvania’s 67 counties, with 619 cases per 100,000 people, according to an interactive map developed by the New York Times. Northampton County has a somewhat lower per capita rate, with 487 cases per 100,000 residents, according to the same map.

Within both counties, zip codes that encompass urban areas tend to have higher caseloads than those with populations that are primarily suburban and/or rural, according to the new health department map.

The 18102 zip code–which closely corresponds with much of center city Allentown–currently has the most cases in the Lehigh Valley (770 as of Tuesday) and the second highest number in the state, after Hazleton’s 18201 zip code (841 cases as of Tuesday).

Closer to home, the 18055 zip code which includes Hellertown borough, part of Lower Saucon Township and small portions of both Williams Township, Northampton County and Springfield Township, Bucks County had a total of 27 confirmed cases of COVID-19 among residents as of Tuesday. The state map indicated that 122 residents of the 18055 zip code have tested negative for the disease.

The 18015 zip code straddles the Lehigh-Northampton county line and includes Fountain Hill borough as well as portions of Bethlehem, Salisbury Township, Lower Saucon Township and Upper Saucon Township. As of Tuesday, there were 132 confirmed cases and 426 negatives within that zip code.

South of 18015, the 18034 zip code for Center Valley–which includes much of Upper Saucon Township, Lehigh County–had 19 confirmed cases and 105 negatives as of Tuesday.

The zip code for Coopersburg (18036)–which includes several municipalities in southern Lehigh and upper Bucks counties–had 20 confirmed cases and 165 negatives as of Tuesday.

According to the map data, the zip code with the most confirmed cases in Northampton County as of Tuesday was 18042, which encompasses the city of Easton and much of Williams Township. The state reported 268 cases and 715 negatives there as of Tuesday.

As of 12 a.m. Tuesday, Pennsylvania had a total of 34,528 confirmed cases of COVID-19 according to the state Department of Health. That total included an additional 1,296 cases that were confirmed on Monday. On Sunday the state reported a daily new caseload of fewer than 1,000 cases for the first time since April 1.

To date, health officials said 1,564 Pennsylvanians have died from COVID-19.

That figure rose sharply with the release of the new data Tuesday, as officials within the health department used new criteria to interpret whether someone’s cause of death was the novel coronavirus, and due to ongoing reconciliation of data from county coroners.

In Lehigh County, the total number of deaths attributed to COVID-19 rose from 33 on Monday to 49 as of Tuesday, while in Northampton County the total rose from 36 to 43.

Gov. Tom Wolf told Pennsylvanians Monday that the sacrifices they’ve been making in order to help stop the disease’s spread and “flatten the curve” are paying off, although the state now ranks among the top four U.S. states for confirmed cases (behind New York, New Jersey and Massachusetts) and among the top five states for deaths (behind New York, New Jersey, Michigan and Massachusetts), according to Worldometer statistics.

Monday was the first full day that an order mandating the use of masks or face coverings by most customers and employees inside retail establishments and other businesses in Pennyslvania was in effect.

It was also a day when growing frustration with things like the new mask law, a stay-at-home order that has been in effect statewide since April 1 and a shutdown of non-essential businesses that began in mid-March drew protesters to the steps of the state Capitol in Harrisburg, where they displayed signs demanding that Wolf  “reopen PA.”

Wolf however vetoed a state Senate bill that would have allowed some businesses to reopen immediately, saying that it was not in the best interest of residents, whose health he said could be threatened by a premature reopening of non-essential businesses. He also announced that his stay-at-home order would be extended from April 30 to May 8, when he said the state’s economy will begin to reopen in phases and possibly by region.