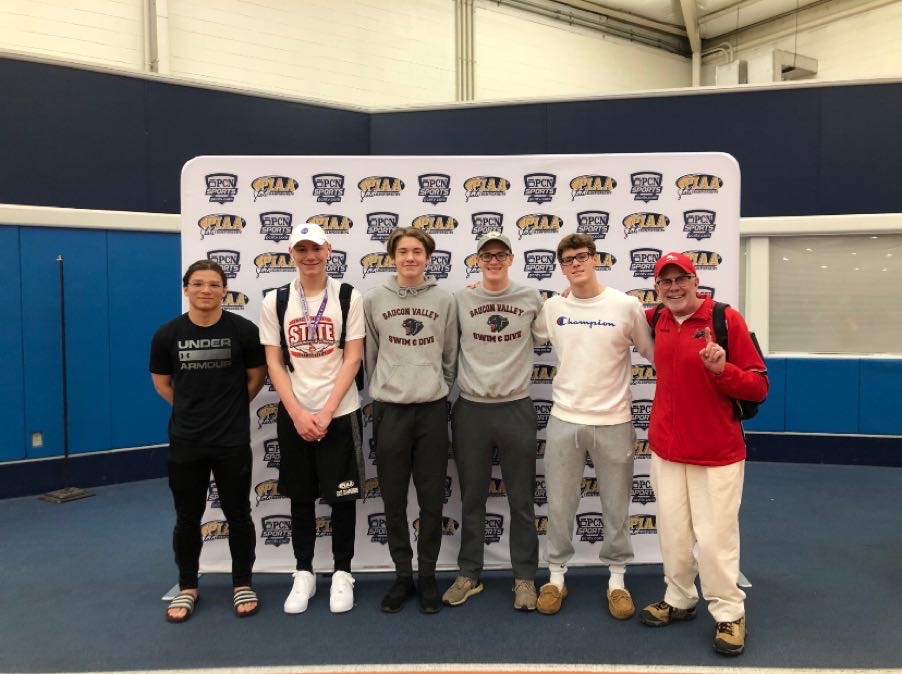 It is certainly obvious that due to COVID-19 our society is in the midst of some sort of very real, sci-fi-like metamorphisis.  Terms like social distancing, quarantine and isolation have shoved their way to the forefront of our vocabulary and reflect an ugly world-wide episode of historic proportions.  Layer by layer the Coronavirus is rotten to the core.  Far beneath the horrors found in the daily headlines, the world of sport suffers as well.  Professional athletes have, of course, put their millions on hold while many amateurs face an uncomfortable uncertainty.  Other amateur athletes, in particular Saucon Valley High School seniors who compete in spring and some winter sports, have been robbed of what is perhaps the sweetest pinnacle of their athletic careers.

Nothing characterizes this misfortune more than the plight of a small group of athletes on the Saucon Valley Swim and Dive team who qualified for the 2020 PIAA Swimming and Diving Championships.  Seniors Kyle Kerr, Ryan Kerr and Noah Mauro along with junior Milo Whitley and freshman Adler Zawodny celebrated their way through Districts and earned their way to the Pennsylvania state championships at Bucknell University in Lewisburg, PA.  However, as is outlined in the timeline below, these young men, and countless others, had an opportunity of a lifetime stripped away from them.

“In support of the recommendation of the CDC and Health Officials throughout the country, that large indoor sporting events should not continue as the country seeks to contain the spread of the coronavirus, the Swimming and Diving Championships have been postponed.  We will provide further information as it becomes available.” 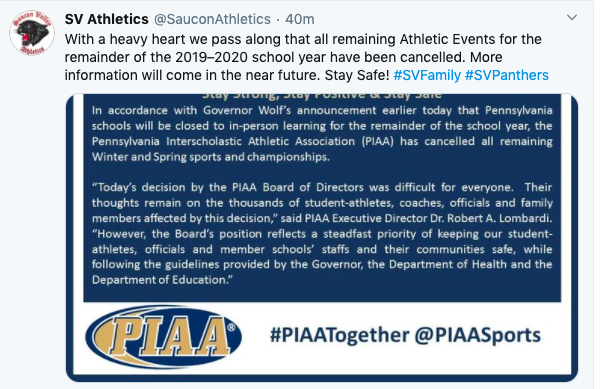 Hopes and dreams that were built upon countless hours of training and preparation crashed quickly for many student-athletes that day in Lewisburg. The Saucon Valley relay swimmers were legitimate contenders to get on the podium with a top-10 finish and earn state medals.  In addition, their District XI times in the two relay events were each about a half-second away from the Saucon Valley school record, set in 2007 by brothers Kyle and Kevin Shoemaker along with Alex Wolfe and Andrew Parry.  “We knew that it was very likely that we would be able to get both records at states,” said Kyle Kerr.  “We were seeded 13th in both events, but there was a lot of room to get into the top-10 since our times were really close to the times of other schools.”

“I believe Noah was a legitimate contender for PIAA State gold this year,” Kolosky said.  “He had improved so much from his previous years level. He was performing dives that he would have never attempted in past years”.  As a junior Mauro placed 7th at the 2019 PIAA Diving Championships.

Now, of course, it will never happen.  In addition to the headlining horrors, coronavirus crushed countless dreams and brought about an abrupt ending to many high school careers.  The mission to climb onto the PIAA podium and take down some long-standing Saucon Valley records suddenly evaporated into thin air before the competition ever got started.

Through it all Kyle Kerr found his silver lining, “As much as I am sad that this was the way I had to end my swimming career, I’m happy to at least know that I finished it as a District champion with my team.” Ryan echoed his brother’s thoughts and expanded, “Our experience is nothing compared to the agony of the Spring athletes, who never even got to officially begin their season.”

Coach’s Quote
“I wouldn’t trade my experiences with this year’s Swim and Dive teams here at Saucon for anything. I couldn’t have done it without the help of Coach Maggie O’Lock and Coach Liz Chikotas, but the team made me and the SV community very proud. Seniors, move forward with your lives and continue to do great things. You are leaders, and the world will always be in need of you. Underclassmen, I look forward to seeing all of you back next year with your enthusiasm and dedication. God bless.”
Saucon Valley Swim and Dive Coach, Ed Kolosky

Best wishes Panthers, the Source is with you!