Although social distancing and other measures instituted by state authorities have helped flatten the curve of Pennsylvania’s COVID-19 outbreak, the disease is still spreading, particularly in eastern counties where the most cases–and deaths–have been recorded.

On Sunday, the Pennsylvania Department of Health reported 1,295 new cases of COVID-19 statewide, bringing the total number of cases since the pandemic began to 56,611.

Counties directly to the south of the Lehigh Valley saw even larger gains in terms of their caseloads from Saturday to Sunday:

Accounting for population may provide a clearer picture of how widespread the disease is within each county.

Northampton County, however, is further from meeting a crucial reopening target for new cases set by the state, according to an analysis of data by Lehigh Valley Live.

One of the criteria laid out by Gov. Tom Wolf and Secretary of Health Dr. Rachel Levine for easing restrictions in counties that remain under a stay-at-home order is for them to have 50 or fewer new cases of COVID-19 per 100,000 people over a 14-day period.

And while Lehigh County’s number declined significantly (from 232 cases per 100,000 residents on April 23), Northampton County’s changed little, decreasing by only about eight cases (from 217 to 209) over the 14-day period. Meanwhile, Bucks County went in the wrong direction, with its number of new cases per 100,000 residents increasing from 187 to 212 during the same period. 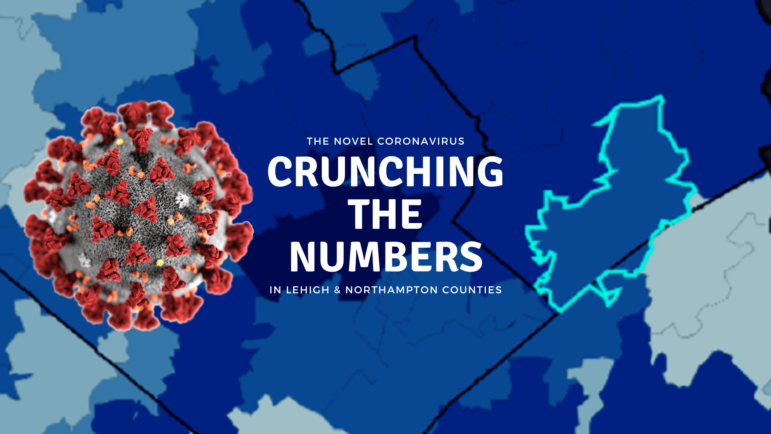 Highlighted at right are the borders of the 18055 (Hellertown) zip code, which extends into a small portion of Upper Bucks County. As of Sunday there were 47 confirmed cases of COVID-19 among residents of the zip code, per the Pennsylvania Department of Health. The map is from a screenshot taken of the department’s interactive zip code map for COVID-19.

The Saucon Valley is located in Northampton County, but is also close to where all three counties meet, and several local zip codes span at least two of the three counties.

The 18055 zip code, for example, includes Hellertown borough and the eastern half of Lower Saucon Township, but also a small portion of Springfield Township, Bucks County, in addition to a sliver of Williams Township, Northampton County.

As of Sunday, the total number of confirmed cases in that zip code to date was 47, per the Department of Health; an increase of 10 cases since April 27, when we last reported the total.

The adjacent 18015 zip code includes communities in both Northampton and Lehigh counties, and as of Sunday there were 220 cases in it, or 61 more than there were April 27.

Although the 18015 zip code is partly in Lehigh County, its new cases together with those in the 18055 zip code over 13 days represent nearly half the number the entire county should be reporting in order to meet the state’s guideline.

State officials, however, have stressed that the 50-case threshold is not the only factor being considered when evaluating whether a county can move from the red to the yellow phase of Wolf’s plan for reopening Pennsylvania.

Nevertheless, some county officials in south central Pennsylvania are expressing frustration that their counties will remain under the stay-at-home order until at least June 4, even though they already have fewer than 50 new cases per 100,000 residents.

Locally it remains to be seen whether pressure from elected officials such as state Sen. Lisa Boscola (D-18), who told Wolf Friday that she wants Lehigh and Northampton counties to be moved to the yellow phase of his reopening plan, will have any impact on the decision-making process at the state level.

As of Sunday, more than 3,700 Pennsylvanians had died from COVID-19, including two Hellertown residents. About two-thirds of the deaths have occurred in nursing homes.

To search interactive maps and view other information about COVID-19 in Pennsylvania, visit the Department of Health website.