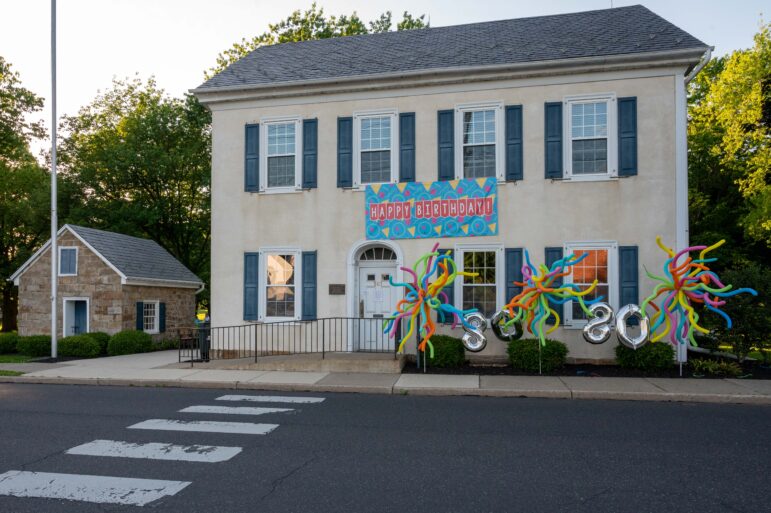 The outside of the historic Hellertown Borough Authority building on Durham Street was decorated in celebration of the authority’s 80th birthday this week.

If you were wondering whose birthday was being celebrated at the Hellertown Borough Authority this week, it was…everyone.

Earlier this week the borough’s public water and sewer authority celebrated 80 years of serving its customers.

Administrator Lauren Sufleta announced the celebration in a Facebook post on the Authority’s page and stressed that the milestone achievement is no small feat.

“It may seem as if celebrating the 80th birthday of a water and wastewater authority is not a big deal,” Sufleta said. “But I can say from experience, it is.”

The Hellertown Borough Authority was founded in 1940 when the Borough of Hellertown granted a charter to establish the organization. The result was the creation of a separate entity solely dedicated to governing over the development of water and wastewater systems for the growing community.

The authority established a board, which would eventually be led by influential borough leader, Morris Dimmick. Dimmick and his early board members would go on to purchase multiple parcels of land throughout Lower Saucon; land on which 14 springs are located.

Under the guidance of Dimmick, the authority also purchased additional land to ensure that the springs were protected from development and contamination. Those 14 springs have become the primary water supply for Hellertown over the past 80 years.

Sufleta has high praise for the authority’s early commitment and dedication to providing affordable and sustainable services for the community.

“This amount of foresight is only done by people who care about their community and those with a vision for a sustainable future for the customers they are responsible for,” she said.

Through the years, Sufleta said, the authority has worked hard to make improvements which honor the vision of its founders.

These have included making provisions for alternative water supplies, both from wells and neighboring jurisdictions. The board has also overseen the construction of sewer pump stations and a water tank.

More recently, the board has been tasked with making changes to accommodate a more modern way of operating.

“The vision of what a utility is has evolved over the past 25 years,” Sufleta said, referring to a shift in focus toward the safety needs of employees, emerging regulatory issues and technological advances. These changes have led to efficiencies which have helped customers, employees and frontline teams.

Sufleta praised the authority for its diligence in making decisions and changes that are in line with the community it serves.

“Over the past 80 years, this authority has thrived and has made tremendous decisions for the community,” she said.

Sufleta took a moment to offer some personal insight from her more than 20 years in the public utility industry.

“There are many things that the Hellertown Borough Authority has done, that I saw large operations having trouble doing,” she said.

Sufleta attributes the authority’s success to the good decisions that were made by past and present board members and employees.

“This is not a business for profit, we do not collect taxes, and we set rates that correlate to direct operational and capital costs,” she said. “Revenues are invested in the water and wastewater systems.”

The Borough of Hellertown has extended its wishes for a very happy birthday to its Borough Authority, and thanked Sufleta for her and her staff’s continued hard work.

That hard work includes looking into interesting projects to keep the organization going for another 80 years, Sufleta said, noting that “we are a part of this community and we thank you for entrusting us with the future of the authority.”