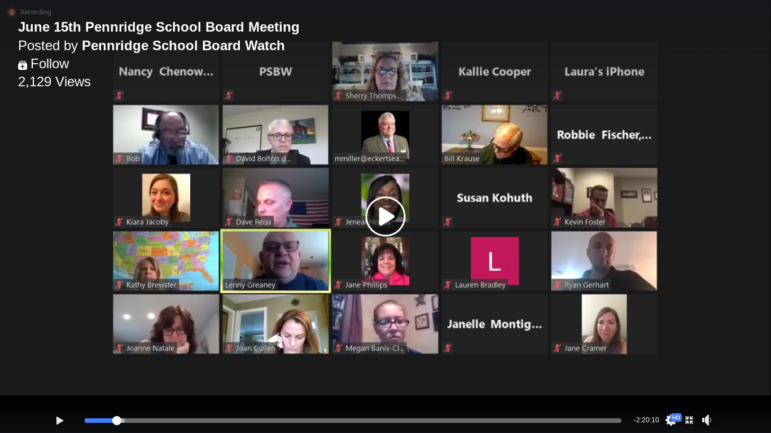 A screenshot of the Pennridge school board meeting that was held on Zoom Monday.

Approximately 170 residents joined Monday’s Pennridge virtual school board meeting in response to recent online comments made by board vice president and curriculum director Joan Cullen. The meeting drew speakers who called for Cullen’s resignation over what they perceived to be racist and otherwise offensive posts made on her personal Twitter page.

In particular, a tweet in which she shared a post claiming that systemic racism does not exist in America and added her own words, stating that “there’s also no systematic (sic) sexism, homophobia, etc.” drew criticism.

“I’m really appalled that so many people are on this call today because of racist, homophobic and sexist tweets by Joan Cullen. … All you have to do is go to her Twitter account and you can see that,” said parent Janeal Hobbs, who told the board “(Cullen) needs to resign immediately.”

District parent Lauren Bradley characterized Cullen’s response to an email she sent her earlier in the day as “a canned response that she had sent to multiple people.” Bradley said “Cullen stated that ‘systemic oppression is a matter of opinion,’ which is absolutely wrong… who’s standing up for students of color and minority students in this district?”

Other speakers agreed with calls for Cullen to resign, as well as approval of a statement from the board condemning her tweets, however she did receive support from some community members.

“I also don’t support censoring dissenting views as a matter of practice in our district and I’m proud to call Joan a leader in our community,” Hupka said.

A prospective delegate for President Donald Trump at the upcoming Republican National Convention, Cullen is currently serving a four-year term on the board that ends in 2023 and is also a board member on the Bucks County Planning Commission.

As of Thursday she had not answered the calls for her resignation and had received support from Pennridge board president William Krause, who said “every board member, teacher and employee has the right guaranteed to every citizen to express their opinion” and that “the district respects those rights,” the Bucks County Courier-Times reported.

However, an online petition calling for Cullen to resign as of Thursday had received more than 1,200 signatures.

In comments addressing related topics at Monday’s meeting, resident Tina Gerhart expressed concern over the lack of a social media policy for school board members, describing it as being “very much needed” and something she called attention to in 2018.

A few commenters, including Gitana Wasserman, also called for a ban on the display of the Confederate flag on district property. Wasserman said that when she made an earlier suggestion to ban it, administrators told her its display is protected under the First Amendment. She noted that now, with the U.S. Marine Corps and NASCAR being among the institutions recently banning the flag, it is time to reconsider such a stance. A subsequent commenter, a man named Gerry (no last name was provided), echoed Wasserman’s concern, saying “the Confederate flag is the flag of treason.”

Several other elected officials including school board members throughout the area have recently come under fire for comments or posts they’ve made on social media that have been interpreted as divisive.