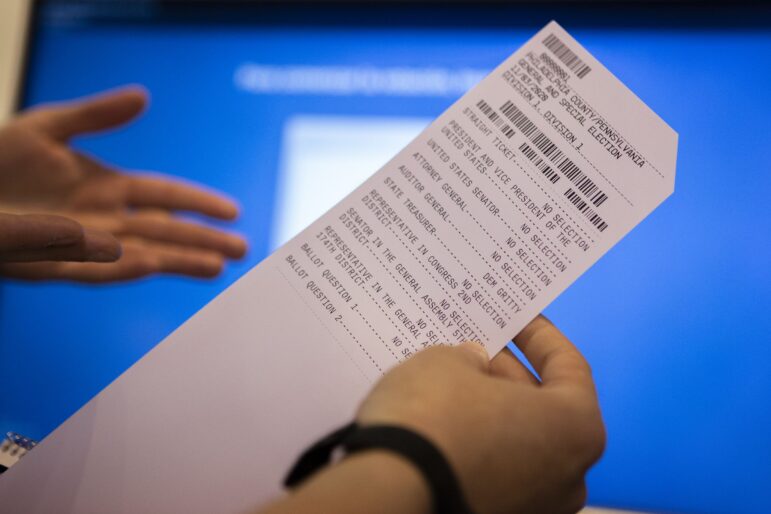 ExpressVote XL devices manufactured by ES&S of Omaha, Neb., will be used in Cumberland County, Northampton County and Philadelphia Nov. 3.

On Election Day a year ago, Matthew Munsey was getting some alarming reports.

Voters in Northampton County were casting their ballots for the first time on the county’s new voting machines, and things weren’t going well: The screens were responding erratically to voters’ touches, and the official ballots the machines printed out were hard to read.

At the end of the night, a Democratic candidate for Northampton County Court of Common Pleas judge was showing zero recorded votes at some precincts, even though the candidate knew at least three people–his campaign manager and the manager’s parents–had voted for him.

“I felt like this was the worst-case scenario that I had dreaded,” said Munsey, the chairperson for the Northampton County Democrats.

One year later, those same voting machines will face their most consequential test yet: a highly scrutinized presidential election in a Pennsylvania county widely viewed as a national political bellwether for the race overall.

In 2020, many elections experts believe as Northampton County goes, so goes the nation.

The county and the voting machine’s manufacturer–whose ExpressVote XL devices will also be used in Cumberland County and Philadelphia this November–insist the issues experienced a year ago were resolved and won’t happen again. The machines were used during the June primary, and there weren’t any reports of major problems.

But some nonprofit voter groups and individual Philadelphia and Northampton County voters aren’t as confident, and want the machines gone.

They sued in December, arguing Pennsylvania’s top election official shouldn’t have certified the machines in the first place on the grounds that the devices were “insecure, unreliable, inaccessible to users with disabilities and not remotely compliant with state ballot requirements.”

The lawsuit, which asks Commonwealth Court to direct the state to decertify the ExpressVote XL devices, said the same machines also caused problems in Philadelphia, with voters saying they had trouble reading the paper ballot cards that show a summary of the user’s vote.

Unlike some other voting machines that will be used this year in Pennsylvania that need a separate scanner to tabulate the completed printout ballots, the ExpressVote XL–manufactured by Elections Systems & Software of Omaha, Neb.–marks a voter’s choice and tabulates it all in one.

This is how it works: A voter inserts a blank, paper card into the machine, then selects their preferred candidates on the touchscreen. Once finished, the voter presses “print” on the touch screen, and the paper card appears with the voter’s selections behind a clear window.

The voter is instructed to make sure the ballot card matches their selections, and then they can either cast the ballot, or quit and start over with a new card.

During the 2019 general election, voters in Northampton County reported the touch screens were either hypersensitive or not sensitive enough, with candidates either not getting selected or the wrong candidates getting selected. ES&S said in December that issue was the result of some of the machines being configured improperly in the factory before being delivered to the county.

In the local judge’s race, an instructional text box on the machine’s screen was actually read as a candidate in the system, meaning any Republican straight-ticket votes went to the box instead of an actual person. This, ES&S said, resulted in tabulation errors.

The company attributed both issues to human error and reconfigured all the machines before the primary.

“Prevention of this human mistake for every election since then has been achieved through additional training, testing and quality control processes,” a spokesperson for ES&S said in an email.

In the hours after the polls closed in November 2019, election officials did a recount of the printed paper ballots, which they touted as the remedy to such digital errors. In response to a lawsuit brought by former Green Party presidential candidate Jill Stein, Gov. Tom Wolf’s administration ordered counties to buy new voting machines that had a “voter-verifiable” paper trail by the end of 2019.

But security experts argue that’s not what the ExpressVote XL provides. During the recount, election officials scanned the barcodes on the paper printouts, which should show a voters’ selections. But voters can’t read their ballot’s barcode and verify that it matches their selections.

“Any election security expert will tell you ‘no, this is yet another potential manipulation point, because you as a voter cannot verify the ballot, and once you submit the ballot, nobody can connect you to the ballot,’” said Ben Ptashnik, president of the nonprofit National Election Defense Coalition, which sued the Department of State.

Despite the county election commissioners issuing a vote of no confidence in December, Northampton County Executive Lamont McClure said the county would continue to use the machines. The county spent $2.9 million to buy 315 in 2019, and they will all be deployed on Nov. 3.

“We’re actually very confident, and we know we’ll have a fair, legal and accurate election because of the paper ballot backup,” McClure said in an interview Tuesday.

He called concerns about hacking “irresponsible.”

“You would have to have an expert hacker (and) be alone with each individual machine for more than an hour to be able to engineer something like that,” he said, adding that that “doesn’t happen” in real life.

Chris Deluzio, the policy director of the University of Pittsburgh Institute for Cyber Law, Policy and Security, said a barcode not matching the words on a ballot can be an indication that the machine was hacked. But it can also be a result of an unintentional programming or technological error.

Deluzio said that’s why post-election audits that take a sample of the ballots and look at the text, rather than the barcodes, are so important. Pennsylvania began piloting such audits last year, and the Department of State said that by 2022, all counties would be auditing elections this way.

Oral arguments in the National Election Defense Coalition lawsuit against the state were heard in Commonwealth Court last week, and a ruling is pending. A separate lawsuit filed by Stein of the Green Party also sought to decertify the ExpressVote XL machines, but a federal judge denied that request in April, calling the claims “baseless and irrational.”

In December, when ES&S presented its analysis of the malfunctioning machines, McClure said he wanted the company to be held accountable.

On Tuesday, he said the issues experienced last year wouldn’t be repeated, because the machines that had touchscreen errors have since been recalibrated. The legislature has also eliminated straight-party voting, which caused some of the errors in the judge’s race.

While there weren’t reports of a specific race that was disrupted by technical issues in Philadelphia in 2019, a Reuters investigation found voters there experienced similar glitches with the touchscreens, as well as with paper ballots getting jammed and machine panels popping open.

As of Monday–the last day Pennsylvanians could register to vote–the electorate in the three counties using ExpressVote XL machines made up 17 percent of the state’s registered voters. ES&S products are being used in 37 counties, meaning the majority of Pennsylvania voters who cast a ballot on Election Day will have access to an ES&S machine, although many will have the option of voting by paper ballot.

As of Monday, 220,518 people in Northampton County had registered to vote, and 34.3 percent of them had requested a mail ballot.

Lee Snover, the Northampton County Republican committee chair, said she didn’t have confidence in the machines in 2019, and she’s still concerned now, especially as more people are expected to turn out to vote in November than in June.

She’d rather be using a mechanical voting machine, such as the ones that employed levers and gears to mark ballots, which she said the county once used. She said she doesn’t trust hand-marked paper ballots.

“I want a machine, but I want one that works,” she said.