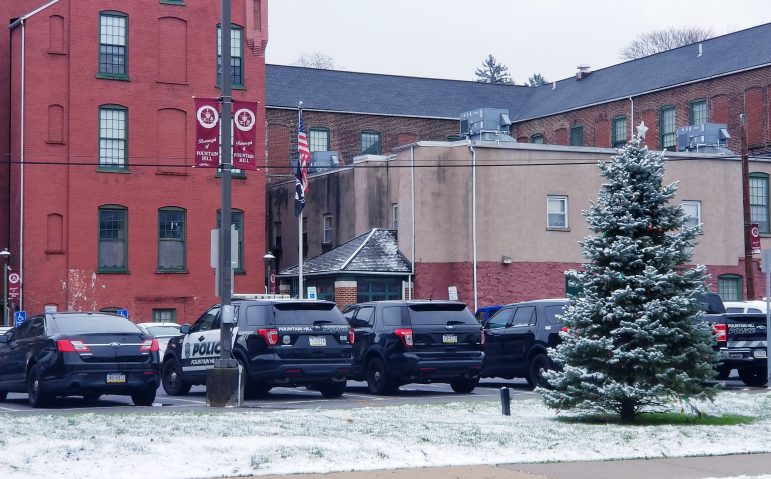 Fountain Hill borough’s fleet of police vehicles, above, is shown parked outside the municipal building on Long Street during a December 2020 winter storm. (FILE PHOTO)

Branco said Police Chief Ed Bachert notified him of the department’s need for a new cruiser when council was considering its budget for 2021. About $20,000 was allocated for a new cruiser in the borough’s general fund, but roughly $27,000 more was needed to fund the purchase.

It was at that point that Branco turned to the Lehigh County Board of Commissioners in an attempt to reallocate leftover casino grant funding that was originally earmarked to fund the hiring of a part-time officer.

“It’s been harder to get part-time officers, and we got notice from the county that we were going to lose that money because it wasn’t spent,” Branco said. “So, I put a request in to the county executive and to the county commissioners to redirect that money.”

Under the Pennsylvania Race Horse Development and Gaming Act, Lehigh County received a portion of revenues from the Sands casino (now known as Wind Creek Casino) to be used for municipal grants.

Branco worked closely with Lehigh County Commissioner Amy Zanelli and Lehigh County Executive Phil Armstrong to reallocate the remaining funds. Zanelli authored Bill 2020-01, which would change the use of the remaining Gaming Act funds, allowing it to be used towards the cruiser.

“I thought (Branco) was being smart in his desire to reallocate,” said Zanelli, a Fountain Hill resident. “One of our cruisers really started to break down and become a money pit.”

“Had (Branco) originally applied for the cruiser, I am confident it would have been approved, so I took it up,” she continued. “I explained to my board the situation and obtained unanimous support.”

Branco voiced his appreciation for the efforts of Zanelli and Armstrong when he addressed council about the matter.

“I’m just thankful that the county allowed us to reallocate this $27,000, because this helps considerably,” he said.

Branco received the formal contract from the Lehigh County Commissioners office last week and has directed Bachert to order the new cruiser. He said it should be patrolling borough streets within a few months.