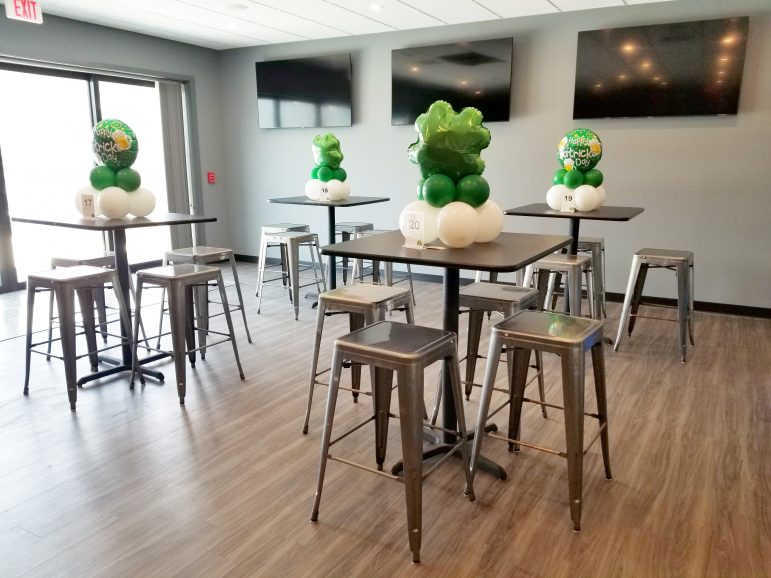 With many COVID-19 restrictions soon to be lifted at Pennsylvania bars and restaurants, the Dewey Fire Company’s new bar is opening at an auspicious time. More than a year after renovations began, Frontline at the Dewey is hosting a sold-out soft opening Friday night. In addition to the bar area, the fire company’s renovated banquet hall will also be showcased.

It’s taken more than a year, a lot of hard work and perhaps a bit of “luck o’ the Irish,” but work on the new bar at Dewey Fire Company No. 1–now called Frontline at the Dewey–is nearly complete. Dozens of local residents will celebrate that achievement at a sold-out St. Patrick’s Day-themed party and soft opening that will be held at the bar and adjacent banquet hall inside the landmark Hellertown fire company Friday night.

Fire company president Gail Nolf stressed that the renovations are the result of a true team effort that symbolizes the community spirit that is the department’s foundation.

“It’s been a joy to see the outcome” of that effort, she said Friday morning. “I feel like the community’s really behind us and that makes me happy.”

Although much of the renovation work was done in-house, local construction company Spirk Brothers Inc. made a significant donation to the effort, which will ultimately benefit everyone Dewey Fire Company No. 1 serves.

“Everything the club generates will go toward fire and EMS response in the community,” Nolf said, adding that Spirk Brothers was “a terrific partner” on the project.

“That company has always been there for us,” she said.

In the bar area almost everything is new, from flooring to lighting to the doors–including a set of glass doors that open onto an enclosed patio area. A new POS system will make food and drink purchases a breeze, and a new audio-visual system–purchased with a grant from St. Luke’s–will no doubt be appreciated by the eyes and ears of all who visit. 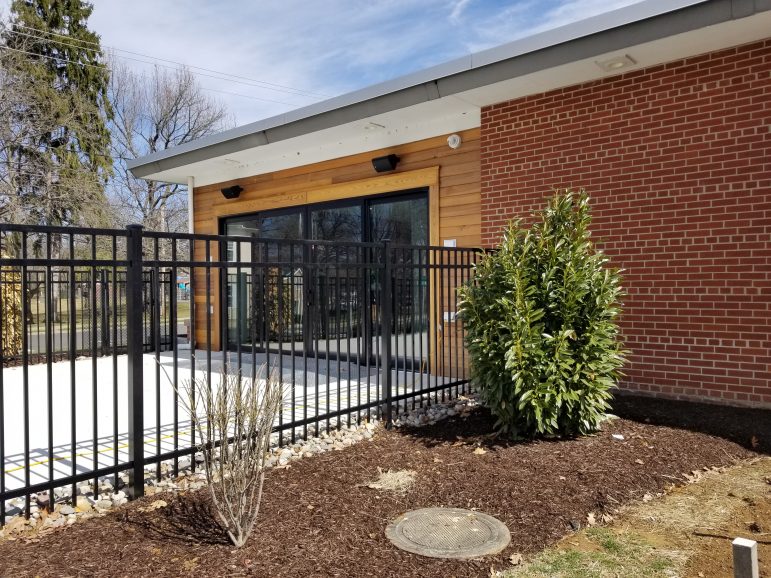 A new enclosed patio at Frontline at the Dewey isn’t yet set up for outside dining, but eventually will feature tables with umbrellas and chairs for the al fresco enjoyment of the club’s patrons. There are also patio heaters for the cooler months.

The best of “the old” will also be part of Frontline at the Dewey’s decor, with memorabilia and photographs commemorating the fire company’s nearly 125-year history displayed inside the modern bar area, on walls and in a backlit display case near the entrance.

Also still to be installed are a jukebox and an ATM.

Nolf noted that plumbing and electrical systems throughout the building were upgraded as part of the renovations, which have been funded with a combination of loans and money from the fire company’s fund balances.

In the spirit of community, 2021 bar memberships are discounted to just $5 per person.

The banquet hall and bar are both non-smoking.

Nolf said she believes Frontline at the Dewey will complement other successful food and drink establishments operating in the Hellertown area.

“We’re not trying to compete at all,” she said. 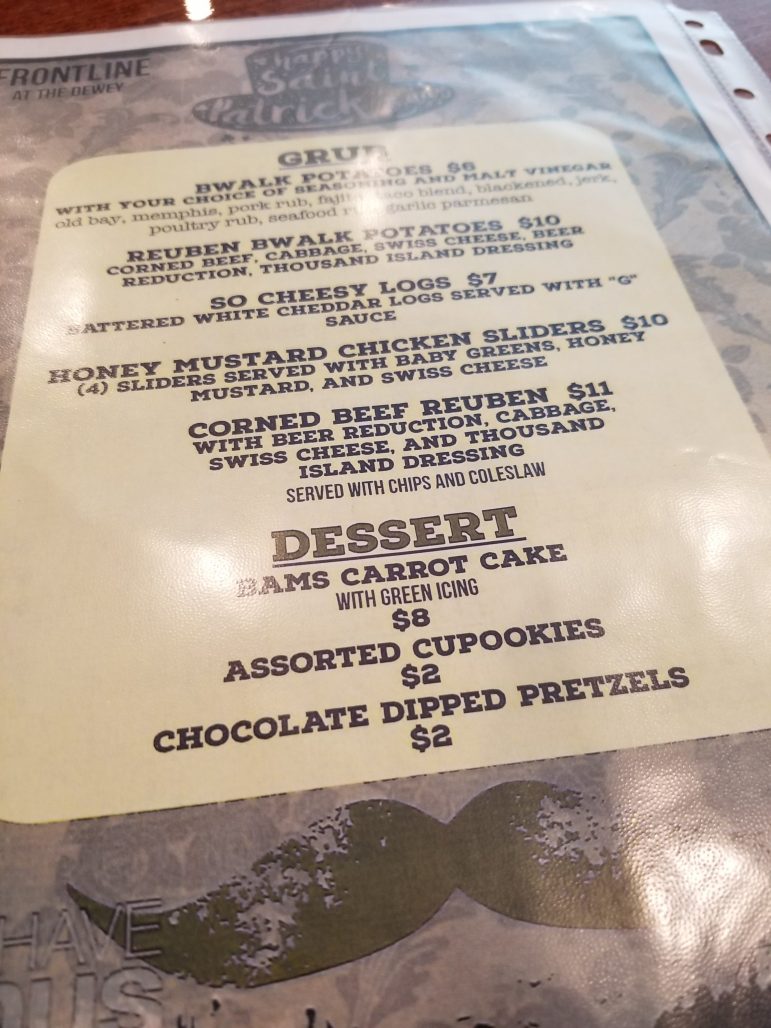 St. Patrick’s Day food specials for the soft opening of Frontline at the Dewey are by ChefMeals and chef-owner Joe Stout.

Food for Friday night’s bash is by ChefMeals and ChefStreet Kitchen owner Joe Stout, who recently became the fire company’s caterer and is a tremendous asset to the company, Nolf said.

“He’s great to work with,” she said of Stout. “He’s so creative (and) he’s so vested in the community.”

A regular bar menu for Frontline at the Dewey is something that will be made available in the future. In the meantime, menu and other updates are being posted on the fire company’s Facebook and Instagram accounts as well as on ChefMeals’ social media feeds.

The St. Patrick’s Day decorations are also a reflection of the community spirit behind the bar and banquet hall renovations.

They were donated by Nicol Green, owner of Beyond Decor, who recently reconnected with the fire company after being married there several years ago. 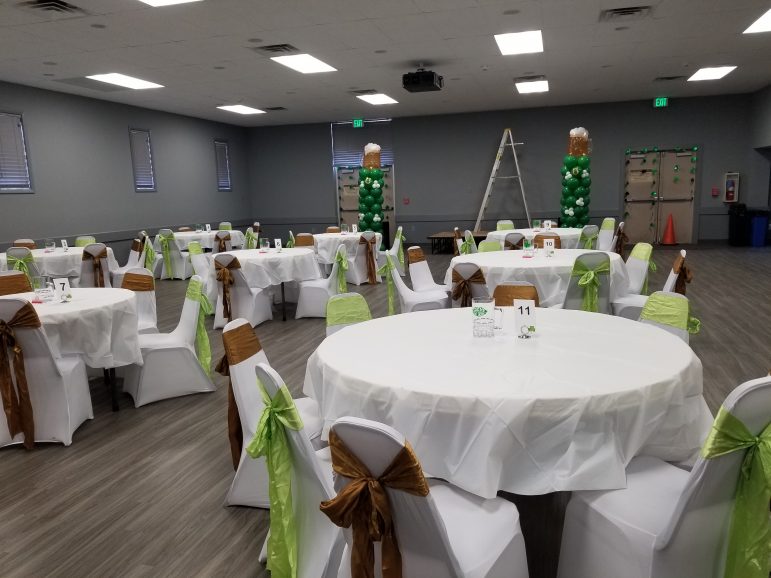 The renovated Dewey banquet hall was decorated for Friday’s soft opening event by Nicol Green, owner of Beyond Decor. Green said she wanted to give back to the fire company that hosted her wedding three years ago by donating her services.

“This place is special to me,” she said, adding that she hopes to decorate future events–including weddings–in the banquet hall.

“We have to work with each other,” she said. “Especially in times like these.”

Nolf echoed that sentiment in reflecting upon the work she and many other volunteer-members have devoted thousands of hours to over the past year.

While things may have taken longer than anyone initially thought they would, she said she is confident that the wait has been worth it.

“I think we did a really good job of doing things the right way,” Nolf said.

“It hasn’t always been easy,” she added, “but the people we’ve worked with have a vested interest in seeing us succeed.” 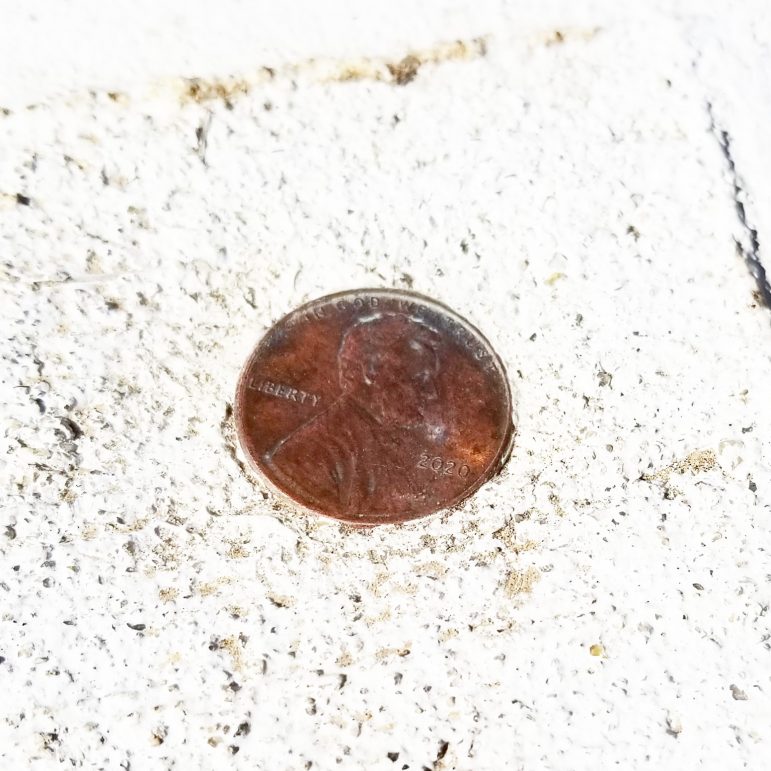 A 2020 penny embedded in the cement patio outside Frontline at the Dewey is kind of cornerstone for the establishment and the volunteers who have worked tirelessly to help reinvent it over the past year. 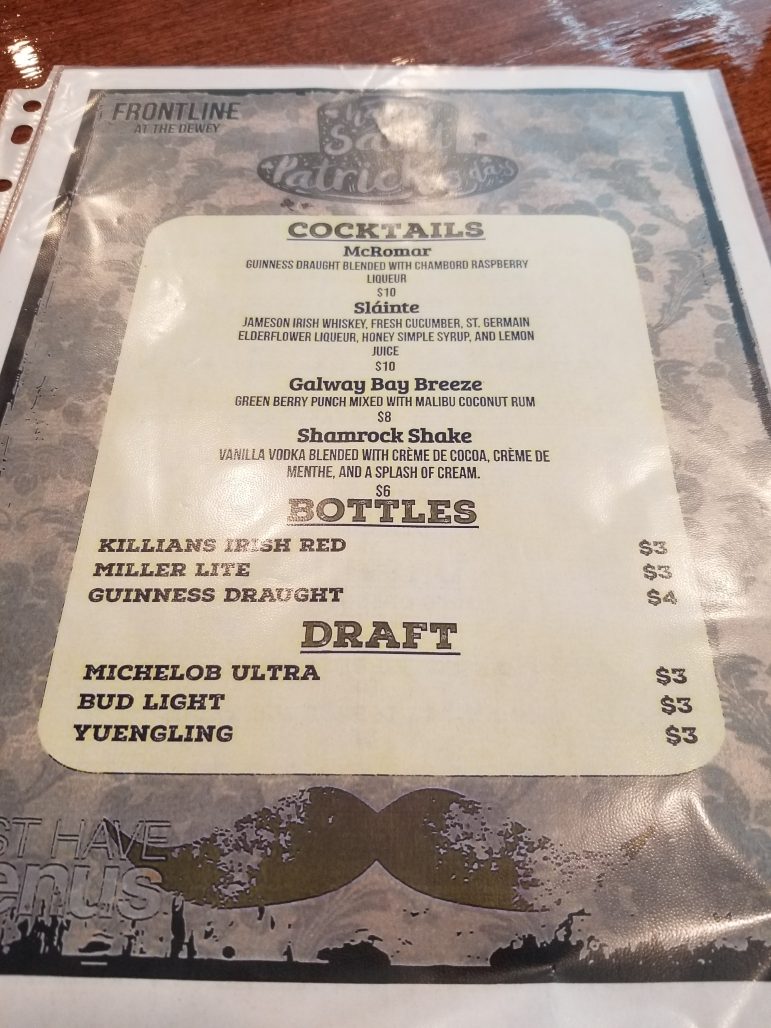 The drink menu for Friday night’s St. Patrick’s Day party and soft opening of Frontline at the Dewey features draft and bottled beer along with specialty cocktails. 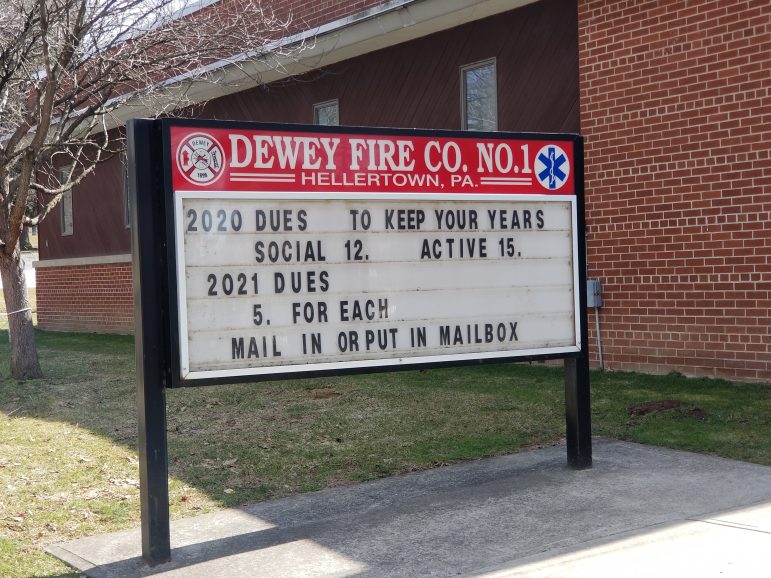 The message board outside Dewey Fire Co. No. 1 advertises membership renewals and purchases. The cost of a membership is discounted to $5 this year in the spirit of community and to encourage area residents to join. 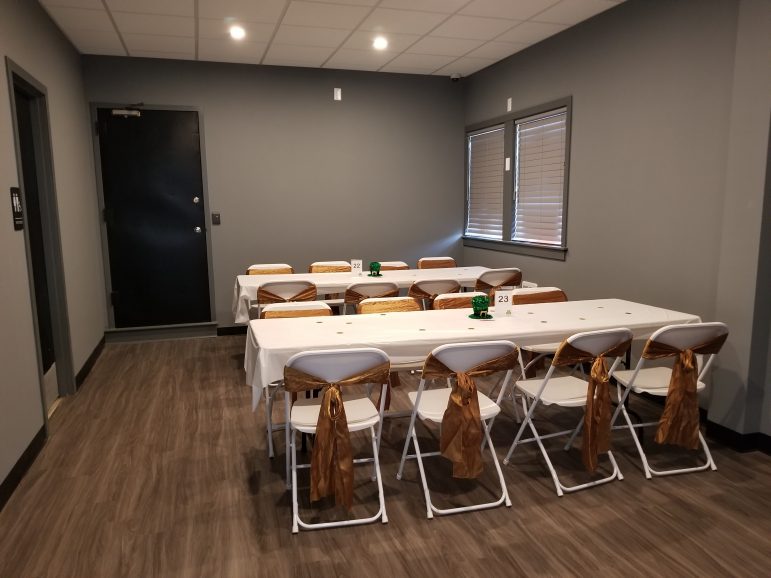 A room behind the bar that was once private has been opened up for additional seating. New bathrooms were also installed. 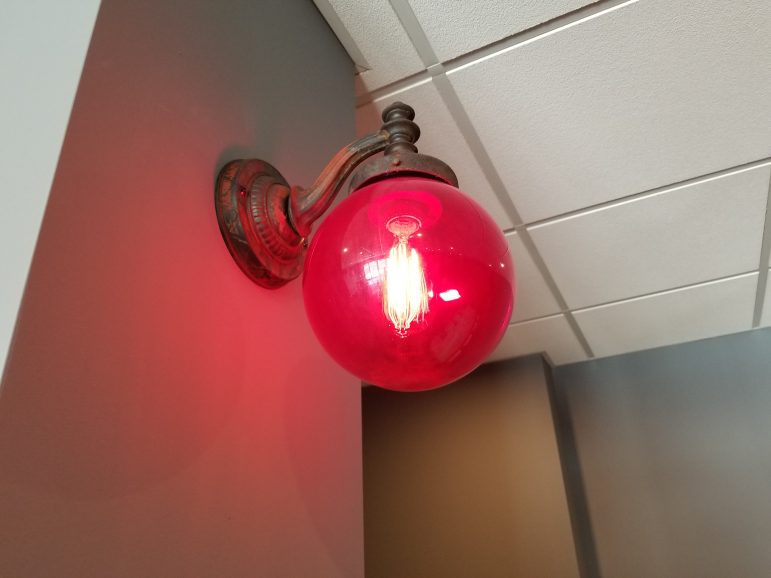 A historic lantern that previously hung outside the fire company is now attached to an interior wall at Frontline at the Dewey, the newly-renovated Dewey Fire Company bar in Hellertown. Other fire company memorabilia is also displayed, and more will be added in the future. 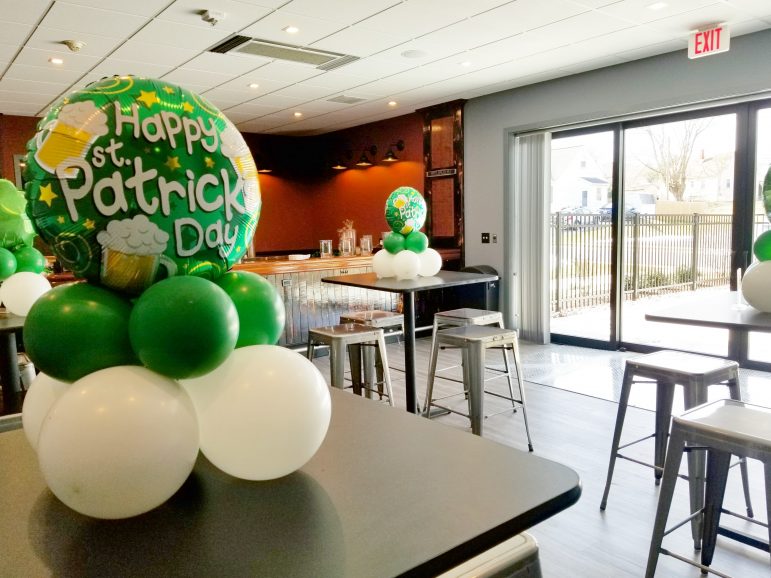 The St. Patrick’s Day decorations in the bar and banquet hall were specially created and donated to the fire company by Nicol Green, owner of Allentown’s Beyond Decor. 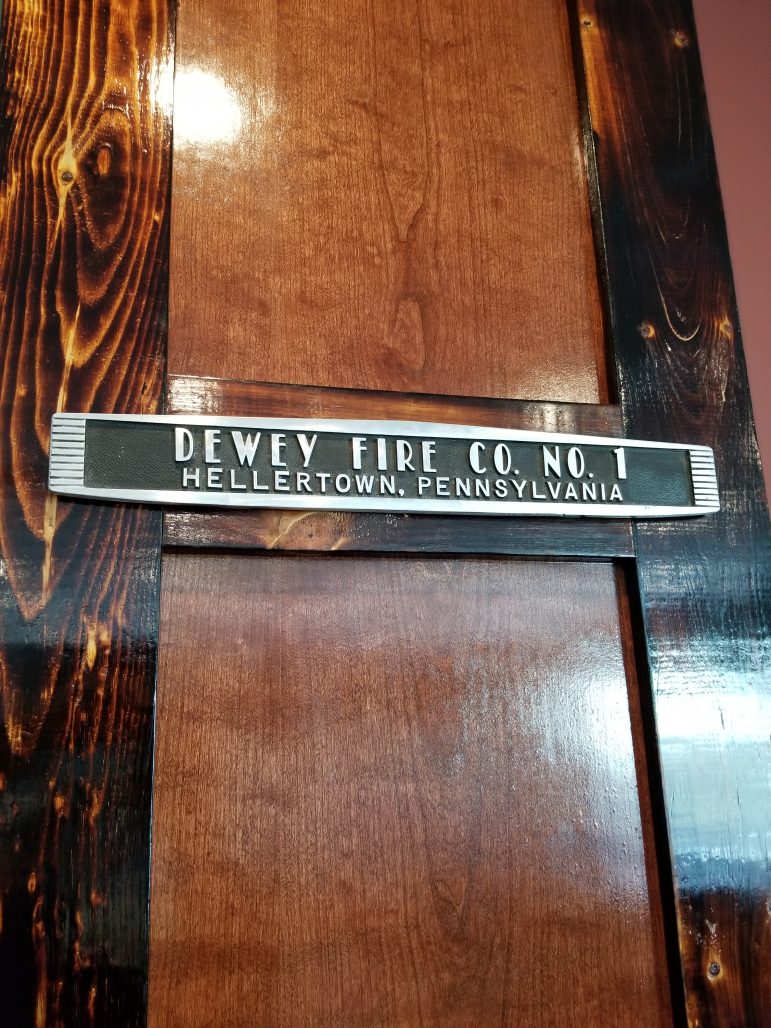 A historic metal sign has a place of prominence above the bar in Frontline at the Dewey. The renovated club at Dewey Fire Company No. 1 in Hellertown will welcome its first customers at a sold-out soft opening Friday night. 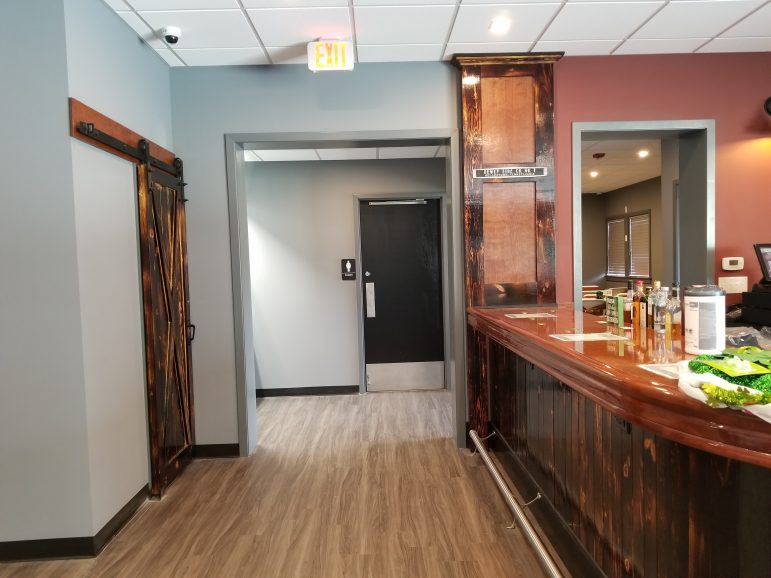 The Frontline at the Dewey bar has a rustic look thanks to the burnt wood paneling in which it is clad. The eye-catching effect was achieved by craftsmen from Spirk Brothers Inc., a commercial construction company that donated labor and expertise to the Dewey Fire Company renovations. Owner Dave Spirk, as a devoted supporter of the local fire company, opened up part of the Steel Club golf course he also owns last summer so Dewey’s annual fireworks show could be held there. 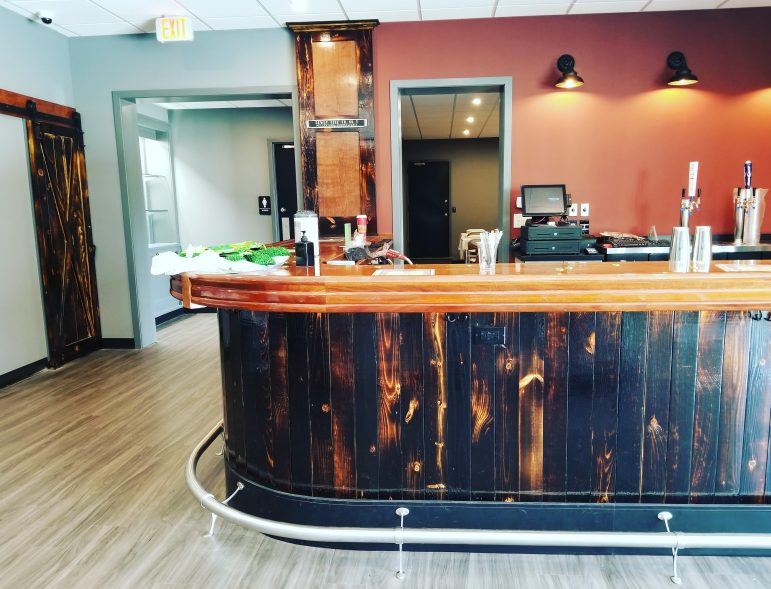 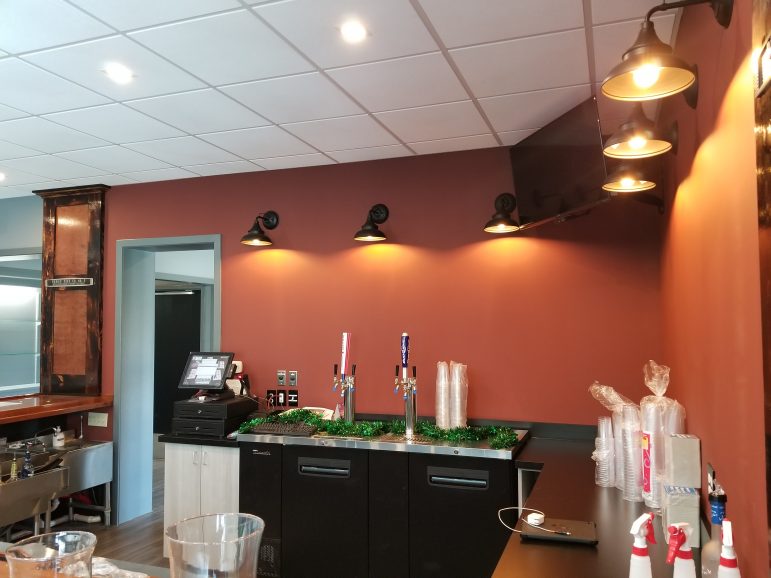 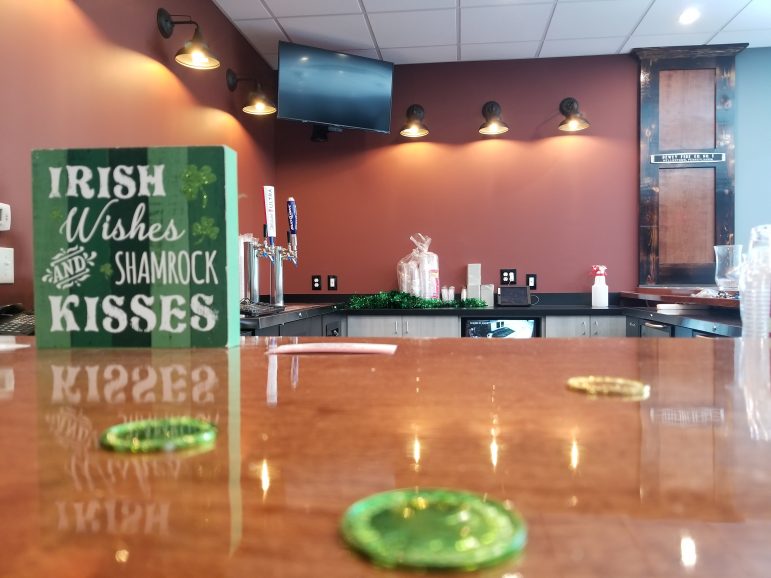 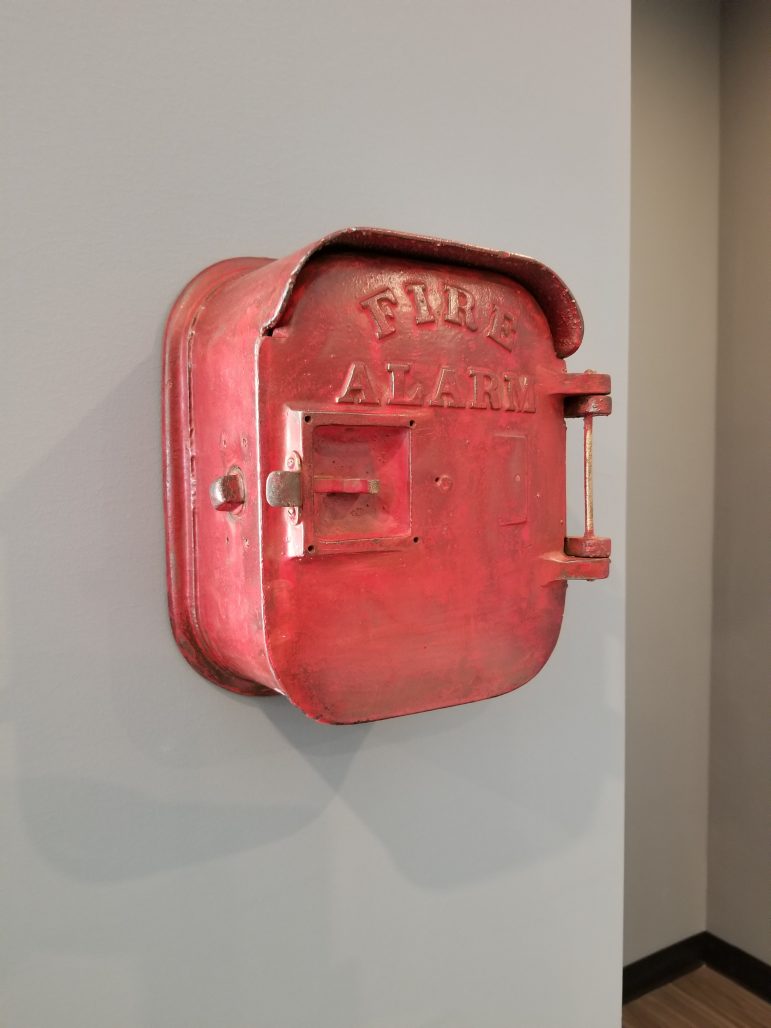 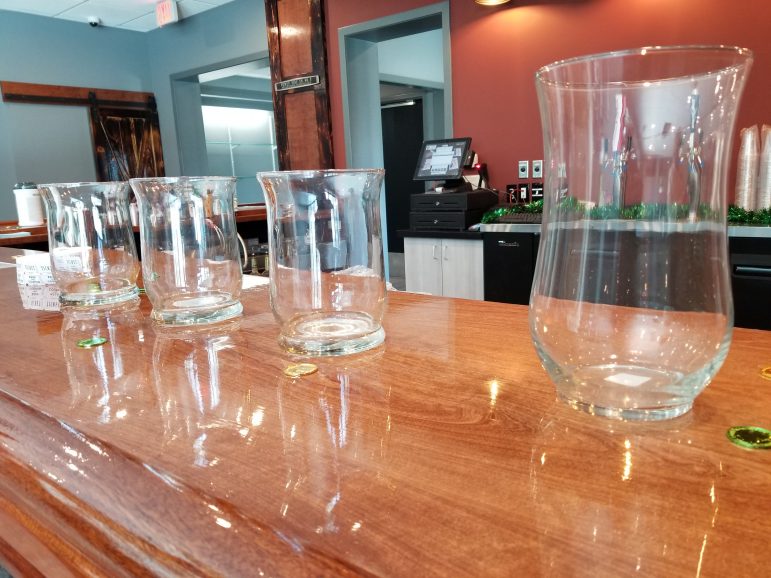 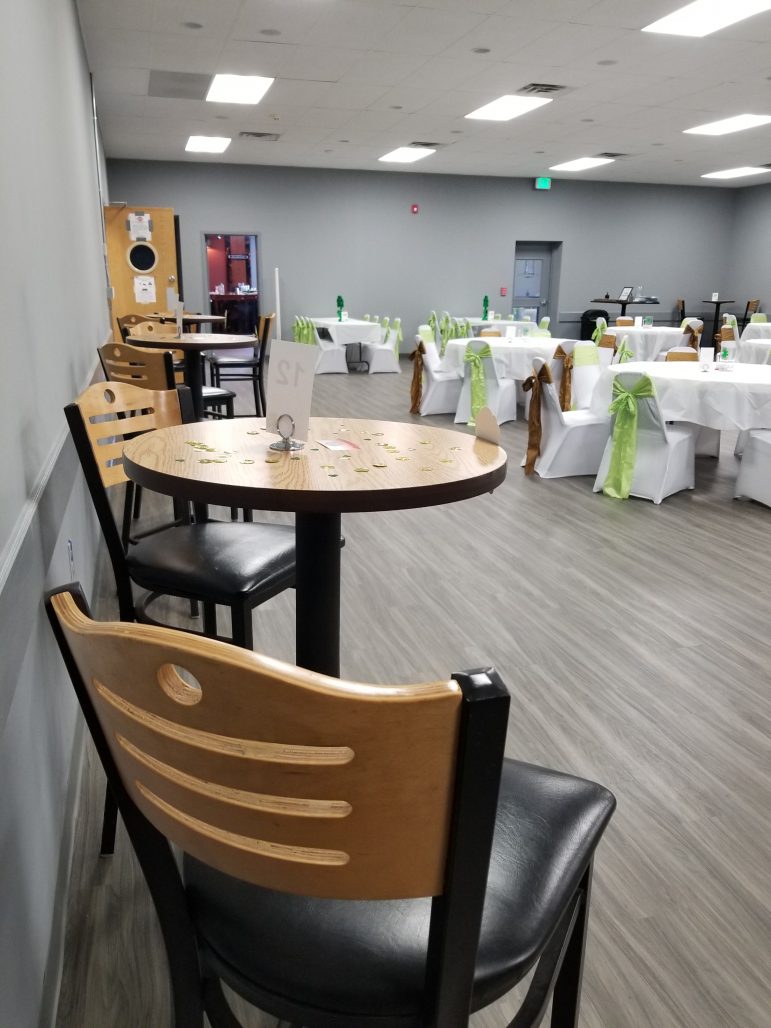 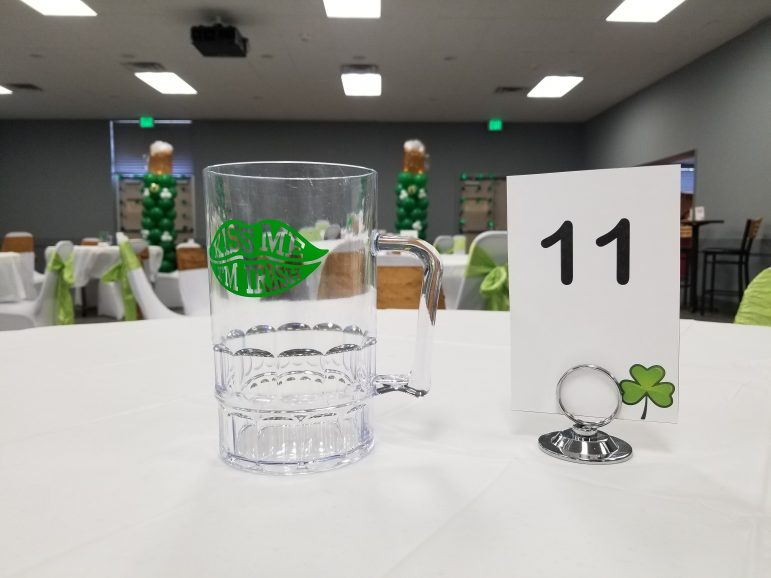 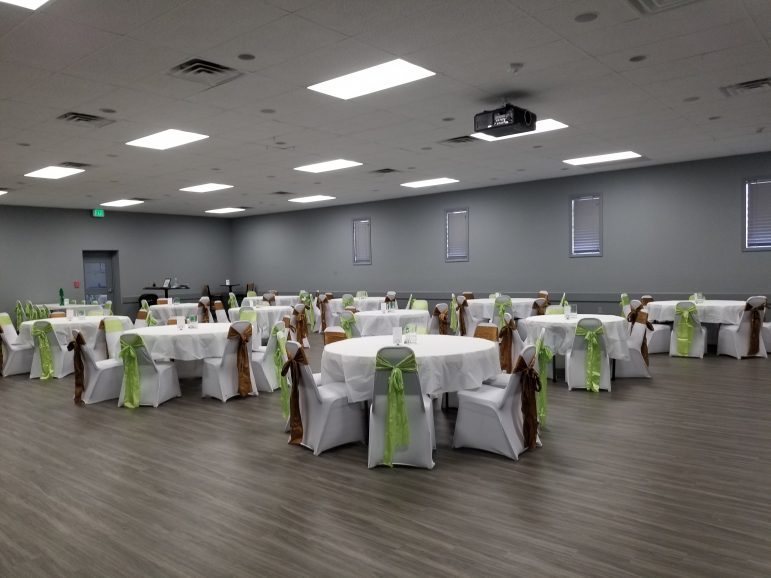 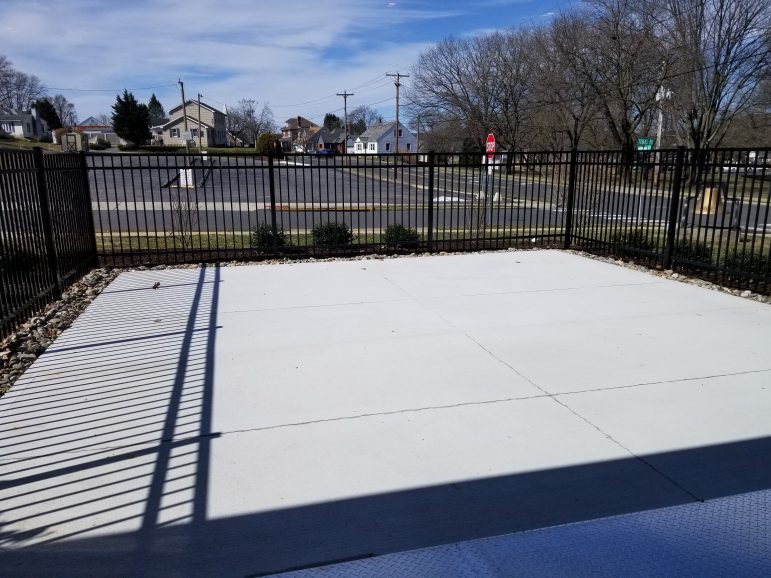 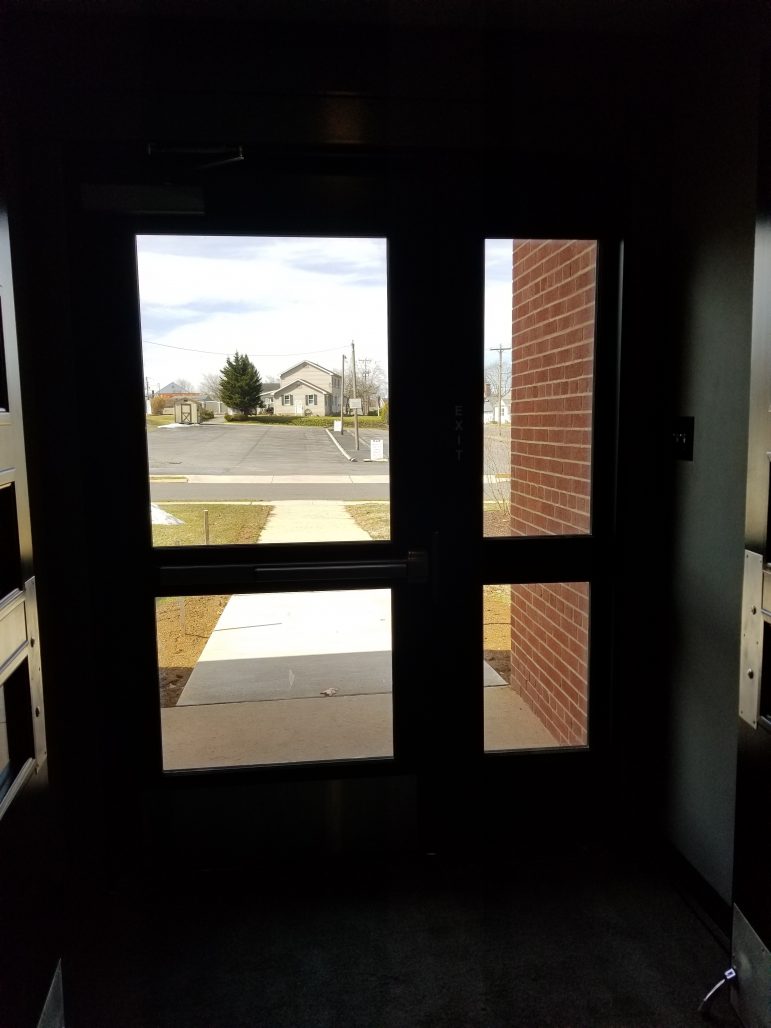 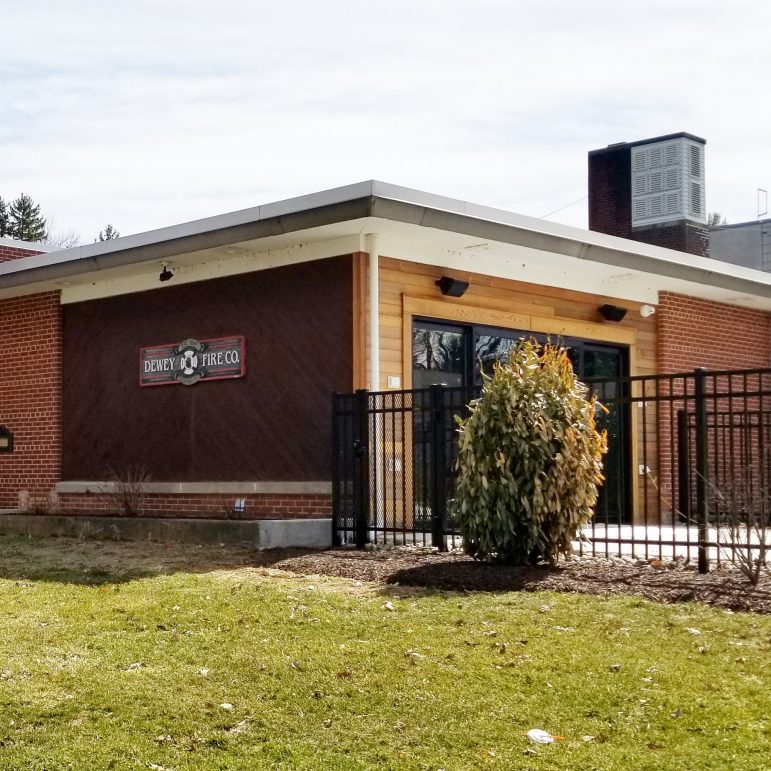