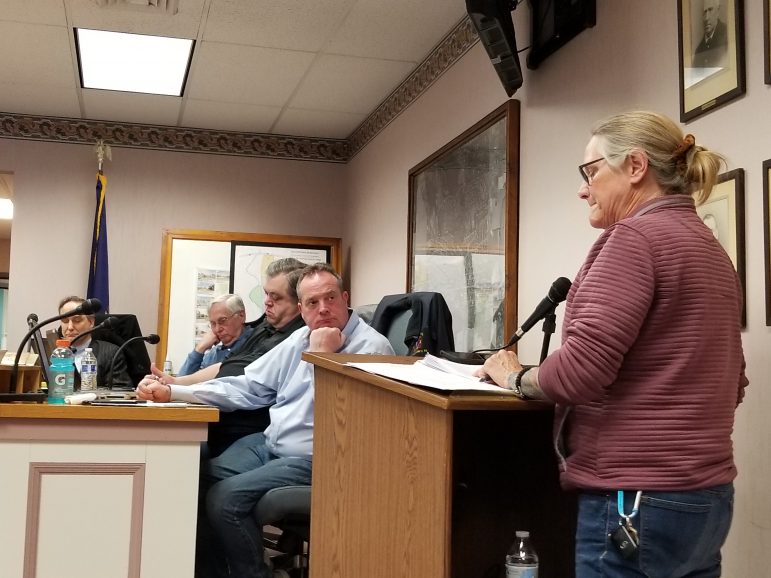 Gail Nolf outlined some of her goals as the newly-chosen president of Dewey Fire Company No. 1 at Monday’s Hellertown Borough Council meeting. Listening, from left to right, are council solicitor Michael Corriere and councilmen Earl Hill, James Hill and Mike McKenna.

As the newly-chosen president of Hellertown’s Dewey Fire Company No. 1, Gail Nolf is making transparency and goal-setting priorities, as said in a presentation to borough council Monday.

A former council member and longtime Dewey member, Nolf stressed that she didn’t seek the position, but willingly stepped up to accept the presidency when asked to do so.

Nolf acknowledged that Dewey has faced serious challenges in recent years–such as the theft of roughly $400,000 dollars by its former treasurer–but she presented a positive outlook for the future.

“I’m not the boss but part of a team,” she said. “I feel like a coach, but in an interesting way.”

“We’re coming up with responsibilities and job descriptions,” Gail Nolf said. “All this stuff is going in a binder.”

Nolf said that in addition to prioritizing goals and promoting transparency, she has also been reaching out to stakeholders and potential community partners for Dewey.

Spirk Brothers has “stepped up” to help Dewey by donating “countless hours” to create plans for renovations that will commence in the future, Nolf said.

The renovations will allow for the reopening of the fire company’s social club, which closed last year because it was losing thousands of dollars, Nolf told council.

New flooring, lighting, paint, window coverings and other improvements are also planned for the adjacent banquet hall, which in years past was a prime destination to host weddings, events and private parties.

More information about what is happening at the banquet hall was shared in a March 1 Facebook post:

In tandem with the renovations, Nolf said the fire company is seeking a new caterer.

“This project takes priority over every non-essential item at this point,” Nolf said, adding that although the banquet hall will be closed for some time for renovations the community should know that it is a “planned closing.”

On the financial side of things, Nolf told council the fire company has engaged the services of a part-time bookkeeper who is bonded. She emphasized that “there’s no money missing.”

She added that with the goal of transparency in mind, she hopes to be able to post future fire company financial audits online, although she said that would need to be done in consultation with the solicitor.

An annual summer tradition in Hellertown is the Dewey Fire Company Carnival, which is put on by Good Time Amusements.

While this event should be a productive fundraiser for Dewey, Nolf said she has learned the carnival is currently essentially “breaking even,” even with Good Time waiving an annual $500 fuel surchage for it.

To help make it profitable, she said the volunteers are considering adding bands and a beergarden, bringing back the classic car show that was formerly part of it and introducing a bike show sponsored by the group B.A.C.K. (Bikers Against Cop Killers).

The fireworks show that is a highlight of each year’s carnival is also an expense for Dewey, and Nolf asked council for a $4,000 contribution toward this year’s display.

A little more than half of the $11,460 needed to fund the fireworks has been raised through several generous contributions by individuals, she said, and Celebration Fireworks is working with the fire company to ensure that they go off in mid-July.

Council president Tom Rieger told Nolf he would like to see the fire company’s 2019 audit before approving a donation to help pay for the fireworks, and council tabled the request pending receipt of that.

In the meantime, Nolf said she will continue to solicit private donations to help pay for the 2020 fireworks show, and she will have help doing that from Mayor David Heintzelman, who told her, “I am almost sure I can get you the money you need.”

Anyone interested in making a donation to the fireworks may contact Gail Nolf via email at gnolf@deweyfireco.org for more information.