Southern Lehigh residents who would like to ask some of their school board candidates questions in person may want to attend an upcoming meet-and-greet sponsored by the Lehigh County Republican Committee and promoted Southern Lehigh Advocates for Full Education (SLAFE), a group/PAC that is supporting several of the candidates.

The free event is open to the public and will be held this Wednesday, May 5 at 7 p.m. at the Upper Saucon Social Quarters, 4900 Lanark Road, Center Valley.

According information shared on the county committee’s Facebook page, the event is specifically for board candidates who are registered Republicans.

School board elections are considered non-partisan in Pennsylvania, so candidates are allowed to cross-file when running in them. Ten of the 11 candidates for four seats on the board will appear on both the Democratic and Republican primary ballots May 18. 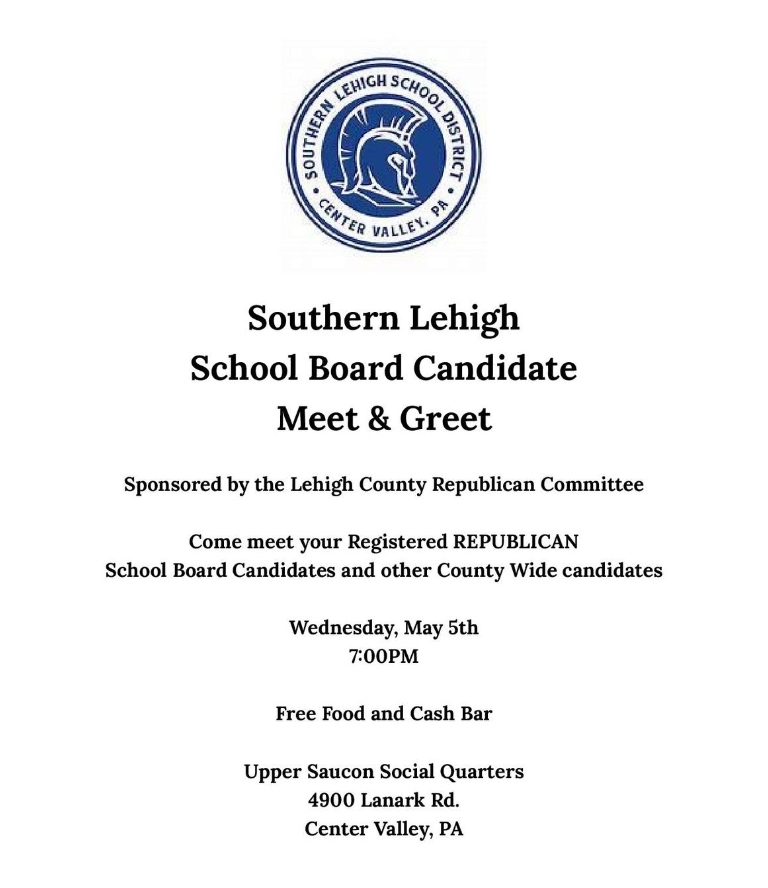 A meet-and-greet for the registered Republican candidates for Southern Lehigh School Board is being held this Wednesday, May 5 at 7 p.m. at Upper Saucon Social Quarters in Center Valley. The event is free and open to members of the community.

On the SLAFE Facebook event page for the meet-and-greet, it was reported that candidates Christopher Wayock, Danelle Roy, Paul Deebel, Nicole King, Mary Joy Reinartz, Stephen Maund and Timothy Kearney had confirmed they will attend.

“Of course, everyone from any political party is welcome to attend,” he added. “Hopefully, further dialogue with all of the candidates can occur after the party primaries and before the general election.”

Saucon Source is sharing information posted in it because we believe voters have a right to know in advance which candidates will be attending a public event, regardless of whether they belong to certain Facebook groups or whether they’re users of social media.

The meet-and-greet will be a “mask optional” event, according to its promoters.

Several weeks ago, the Upper Saucon Social Quarters closed for several days due to what the organization described as a small number of COVID-19 cases among its members.

“Nobody immune from the everlasting CoViD-19, not even the Q,” an April 6 USSQ Facebook post said. “We had some members contract it over the last couple of weeks. Not many, but enough that we feel it is warranted to shut down for three days and do a deep cleaning.” The club reopened April 9.

Wednesday’s meet-and-greet will feature a cash bar, food available for purchase, and according to the Lehigh County Republican Committee flyer, “county-wide candidates” in attendance.

In a statement published on its Facebook page on Monday, the Upper Saucon Social Quarters board of directors said it “does not support and/or endorse any candidate.”

The organization is “hosting this evening to help all members and non-members make an informed decision about the future of the Southern Lehigh School district,” it said.

Saucon Source will continue to share information about candidate events that may be of interest to local residents as we are able to.