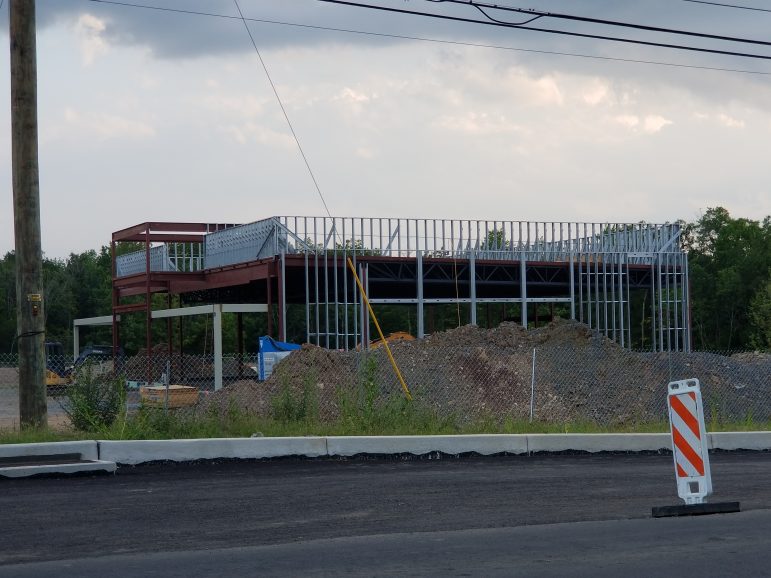 A new Wawa is taking shape along Rt. 309 in Upper Saucon Township, near Coopersburg. Store #8126 will open this fall at Passer Road and Rt. 309.

If you regularly drive through the Coopersburg area, you’ve probably noticed construction under way on a Wawa at the corner of Rt. 309 and Passer Road in Upper Saucon Township.

Work on the convenience store/gas station began about a year-and-a-half ago.

It was slowed by the COVID pandemic, but recently picked up pace again, with the steel frame of the building taking shape on the lot that was once home to the Peppercorn Pub.

Now the company has officially confirmed that the newest Wawa in the area will open sometime this fall, posting on its Future Locations page at Wawa.com that the Coopersburg store will open in “Fall 2021.” The listing includes a link to the menu that will be offered at the new Wawa, which it was recently announced will have McDonald’s as a neighbor.

Meanwhile, work on and near the intersection of Passer Road and Rt. 309 in preparation for the opening of Wawa continues.

Road work continues along Passer Road and Rt. 309 in the area of the Wawa that is currently under construction.

The Rt. 309 Wawa won’t be the only brand new store the company opens in the Lehigh Valley in the coming months, either.

The Future Locations list also highlights the opening of a new Wawa that will be located at 364 Susquehanna Street in Allentown. That store is forecast to open in Winter 2022 at the intersection of Susquehanna Street and S. Fourth Street (Rt. 145) in the city.

Wawa is in the midst of a significant company-wide expansion that included a large hiring effort in the spring. Job opportunities may be found online on the Wawa website, although as of Monday, there were no openings listed for the new Coopersburg store.

Closer to Hellertown, a Wawa is planned for the site for the former Chris’s Diner on Rt. 412, although it is still unknown when construction on that project is likely to begin.

A banner hung from a chain link fence around the work site advertises the contractor for the project, AT Construction Inc. of Drexel Hill.