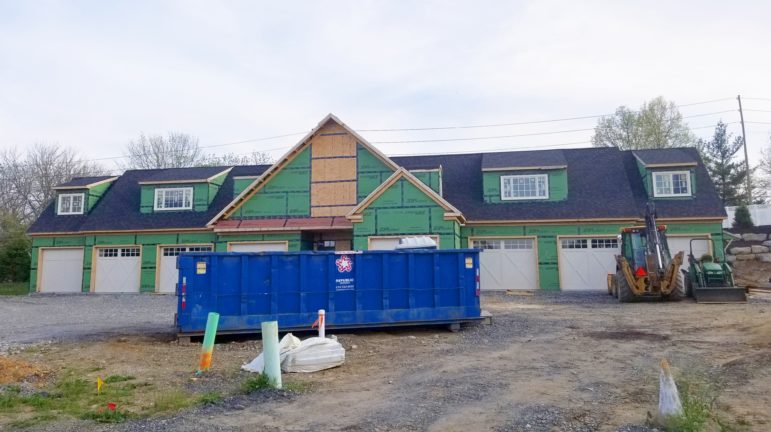 The construction site at Blair Custom Homes’ Stever Mills devlopment in Bethlehem has been modified to confrom with the requirements of COVID-19 construction guidelines established by the Commonwealth of Pennsylvania. The upscale development is located near the intersection of Creek and Friedensville roads, just west of Hellertown.

Pennsylvania businesses involved in the construction industry have been busy ramping up projects that had been on hold due to the coronavirus pandemic. In-person operations at construction sites were permitted to resume May 1, so long as all businesses adhere to governor Tom Wolf’s guidance.

The guidance mandates that companies require six feet of social distancing except in cases where distancing would pose a health risk, such as with team lifting and drywalling. Companies must provide hand wash stations at appropriate locations, and must also implement cleaning or sanitizing protocols at all construction sites.

Workplace gatherings must be limited to no more than 10 people, and virtual meetings are encouraged whenever feasible. Companies also must stagger shifts and breaks as well as limit tool sharing and sanitize tools if they must be shared.

While construction projects have been given the green light, there have still been hurdles involved with resuming operations. John Blair of Blair Custom Homes in Lower Saucon Township pointed out that the entire industry is backed up due to the lengthy work stoppage.

“A lot of these guys’ projects still aren’t up and running yet,” Blair said. “The industry is not running on full cylinders.”

This has presented problems with trying to move projects along. For example, Blair said he was having a hard time getting a firestop inspection from the City of Bethlehem for one of his projects because he was unable to get a hold of anyone on the city’s end.

His offices in Lower Saucon are closed to the public, and all of his workers are able to work either from home or alone in an office. At the job sites themselves, Blair was told he may only have three men on site at a time. At this point, however, Blair said it was hard to get that many people to come to work because everyone is tied up with their other jobs.

With schools and daycares still closed, some workers are having issues finding child care, and that has been prevented them from returning to work. There have also been cases where family members who babysat before the pandemic are longer able to do that for health reasons.

There have even been some supply chain issues.

“We were having problems with some of these companies not getting parts,” Blair said, and he noted that some companies they order from were not shipping to Pennsylvania. “It’s gonna be a little slow right now and people are just going to have to accept it.”

The projects that have resumed, however, have been making modifications to adhere to the governor’s guidelines. At Blair’s Stever Mills construction site in Bethlehem they have put up signs saying that the job site has to comply with CDC protocols. They’ve also provided a contact sheet which lists the site supervisor’s phone number for anyone with questions.

Within the site, they have a table set up with hand sanitizer on it, as running water is not available in many cases. They also have 32 ounce spray bottles of disinfectant on the job sites, and workers carry their own smaller bottles.

Workers are wearing masks, although Blair said he is concerned about workers possibly becoming uncomfortable in the masks once we start experiencing warmer temperatures. 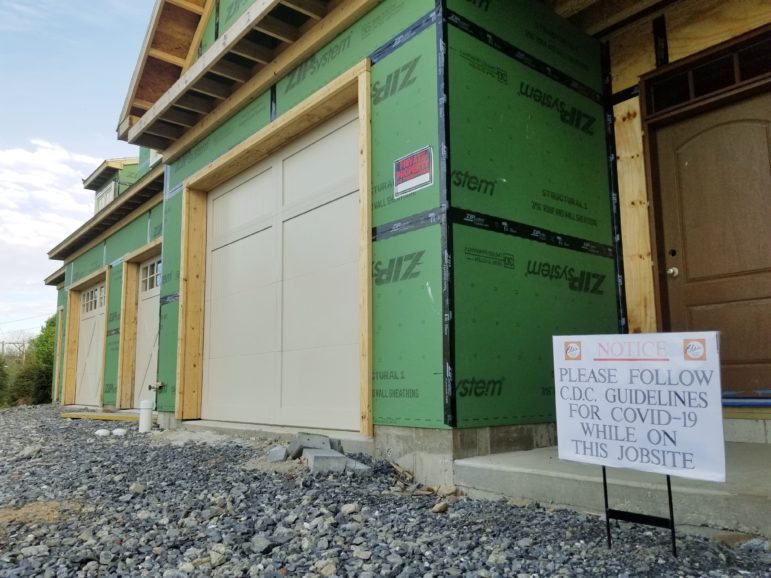 Blair Custom Homes’ Stever Mills construction site in Bethlehem, Pa., is equipped with hand sanitzer stations and affixed with signs which say that the job site has to be CDC-compliant, as part of Gov. Tom Wolf’s guidelines for construction sites.

At their commercial sites it is required that employees’ temperatures be taken regularly as a way of screening employees who may be showing symptoms of COVID-19. This is not required for residential projects because they tend to be smaller job sites.

Blair said he doesn’t expect to have a full understanding of the exact challenges the industry will face for some time.

“We really haven’t gotten things ramped up and running yet to see what kind of problems we’re going to have,” he explained.

Kris Russo, the Zoning and Code Enforcement Officer for Hellertown Borough, noted that construction picked up the day the restrictions were lifted.

David Spirk, who owns Spirk Brothers Inc. and Steel Club in Hellertown, recently submitted plans for one of several townhome subdivisions he is proposing at the club.

The 37-unit Ross Hill townhome complex would be located near the Hellertown-Lower Saucon boundary line off Apple Street in the northwest corner of the 280-acre property.

The plans are expected to be discussed at the next Lower Saucon Township Planning Commission meeting, which is scheduled for Thursday, June 25 at 7 p.m.

Documents related to the plans are listed under “Steel Club Land Development” on the township website’s Important Topics page.