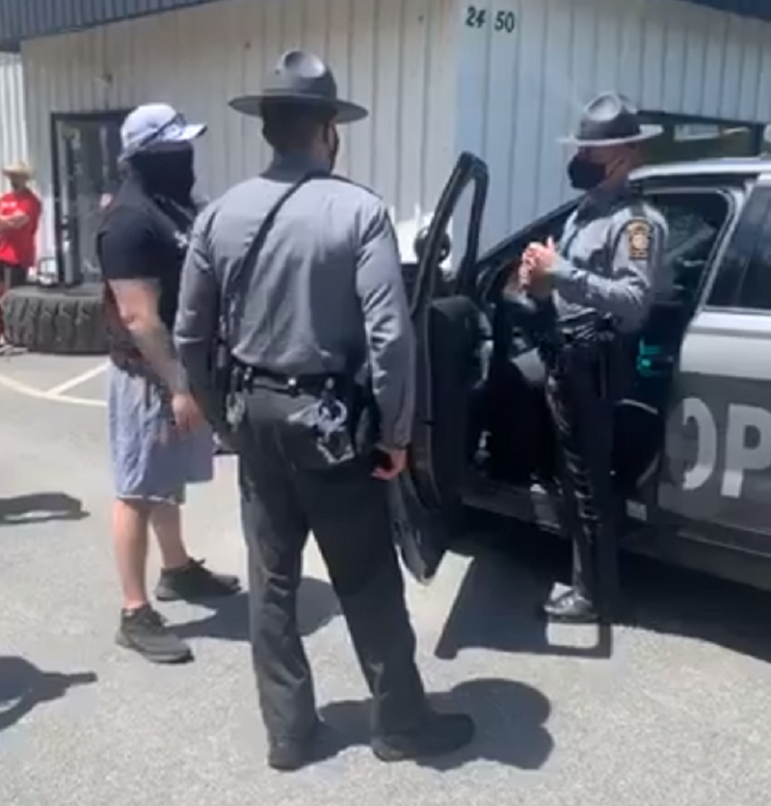 A Pennsylvania State Police trooper talks to the owner of SuperSets gym in Hanover Township, Lehigh County, after police received a complaint about the gym opening in violation of a state health order that says they must remain closed because of the coronavirus pandemic. (Note: This is a screenshot of a Facebook live video that was shared by SuperSets.)

Note: This story has been updated with additional information provided by Pennsylvania State Police Tuesday.

The owner of a Hanover Township, Lehigh County fitness facility was cited for opening his business Sunday in defiance of the state’s Disease Prevention and Control Law, Pennsylvania State Police at Bethlehem announced Monday.

In a news release issued by investigating Ofc. Justin Yozsa, police said the owner of SuperSets gym at 2450 Schoenersville Road received two non-traffic citations “after it was observed by troopers that SuperSets gym was in violation of this act by being open for business as a non-life-sustaining business.”

On Tuesday the Bethlehem barracks issued a second news release about the incident in which police said owner Ed Frack was cited “after being previously warned (about opening) by troopers.”

Specifically, they said he was cited for allegedly violating:

Title 71, Section 1409, says that “every person who violates any order or regulation of the Department of Health, or who resists or interferes with any officer or agent thereof in the performance of his duties in accordance with the regulations and orders of the Department of Health, shall, upon conviction thereof in a summary proceeding before a justice of the peace,  1 alderman, or magistrate of the county wherein such violation or offense is committed, be sentenced to pay a fine of not less than ten ($10.00) dollars and costs nor more than fifty ($50.00) dollars and costs, such fine to be paid to the county in which the violation or offense is committed.  In default of payment of such fine and costs the offender shall be sentenced to be confined in the proper county jail for a period of thirty days.”

Title 35, Section 521.20(A) says that “any person who violates any of the provisions of this act or any regulation shall, for each offense, upon conviction thereof in a summary proceeding before any magistrate, alderman or justice of the peace in the county wherein the offense was committed, be sentenced to pay a fine of not less than twenty-five dollars ($25) and not more than three hundred dollars ($300), together with costs, and in default of payment of the fine and costs, to be imprisoned in the county jail for a period not to exceed thirty (30) days.”

More information about the enforcement of these laws as they pertain to the COVID-19 pandemic in Pennsylvania may be found in a March letter titled “Business Closure Order Enforcement Guidance” published by the Commonwealth.

Troop M officials said that in addition to the citation issued to SuperSets, officers have “issued 12 warnings to non-life-sustaining businesses since enforcement began on March 23, 2020.” 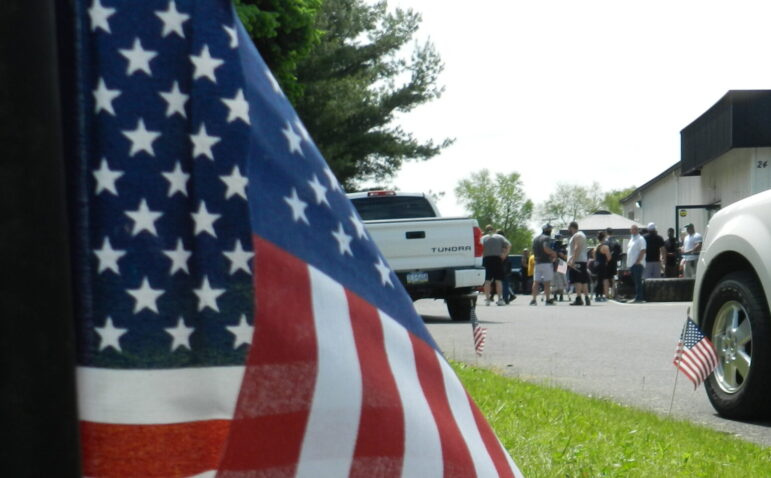 American flags line the driveway at SuperSets gym in Hanover Township, Lehigh County, Sunday. The gym hosted a reopening event in spite of the fact that it is not legally permitted to operate under a Pennsylvania disease control and prevention law. As a result, owner Ed Frack was issued two citations by state troopers who said he was breaking the law.

In video shared on the gym’s Facebook page Sunday, troopers who responded to the gym around 1 p.m. can be seen conversing with owner Ed Frack about the fact that his business was open. Their conversation is muffled and difficult to hear due to background noise and the fact that the person recording the exchange was standing at a social distance.

Dozens of members and supporters of SuperSets attended the event, which Frack promoted in advance, apparently with the understanding that he would be violating the order that has been in effect for months because of the coronavirus pandemic. 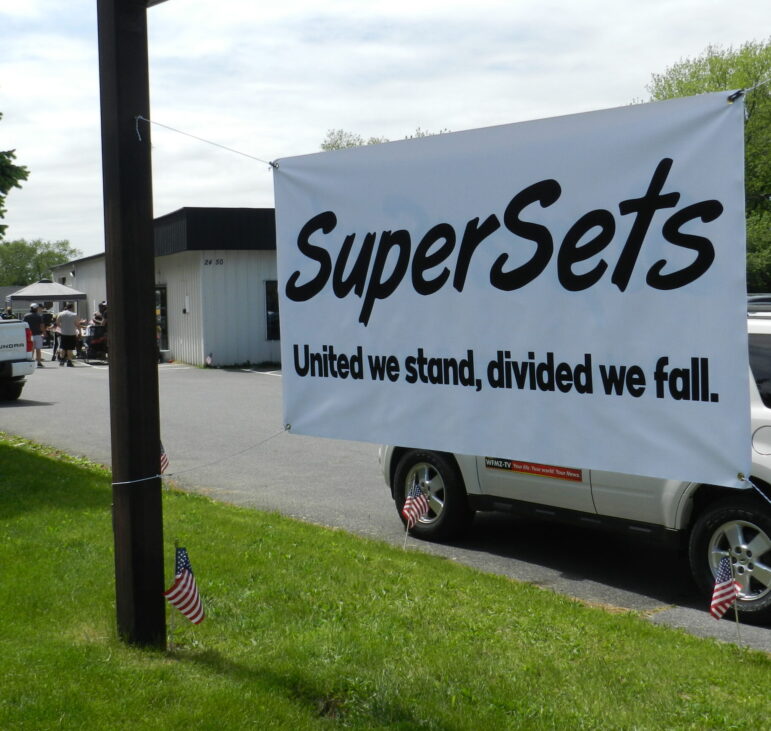 SuperSets, a gym at 2450 Schoenersville Road in Hanover County, Lehigh County, received two non-traffic citations from Pennsylvania State troopers Sunday for opening in defiance of a current state order that prohibits gyms from operating. The gym is one of the first businesses in the Lehigh Valley area to be cited for allegedly violating the state’s Disease Prevention and Control Law, which has been in effect since late March to help stop the spread of the novel coronavirus.

Most attendees did not wear masks or practice social distancing, at least outside, and apparently when police weren’t on scene.

The order issued by Gov. Tom Wolf’s administration in March has become the subject of increasing hostility, with some small business owners deemed “non-essential” under it taking officials to task for enforcing it at the expense of their ability to earn a livelihood.

While business owners such as Frack continue to argue that the law is crippling them to the point that they may not survive long enough to reopen, the state has maintained that businesses such as gyms cannot safely operate yet because of how the virus spreads.

State and local law enforcement have been caught in the middle of the dispute, which is unlikely to end anytime soon, since gyms and other types of businesss in which there is close personal contact are not permitted to operate under the yellow phase of Wolf’s reopening plan.

Lehigh County along with southeastern Pennsylvania and parts of the Poconos isn’t expected to move to the yellow zone until June 5, and it is unclear how long it will be until the Lehigh Valley area is allowed to move into the final, less restrictive green phase. 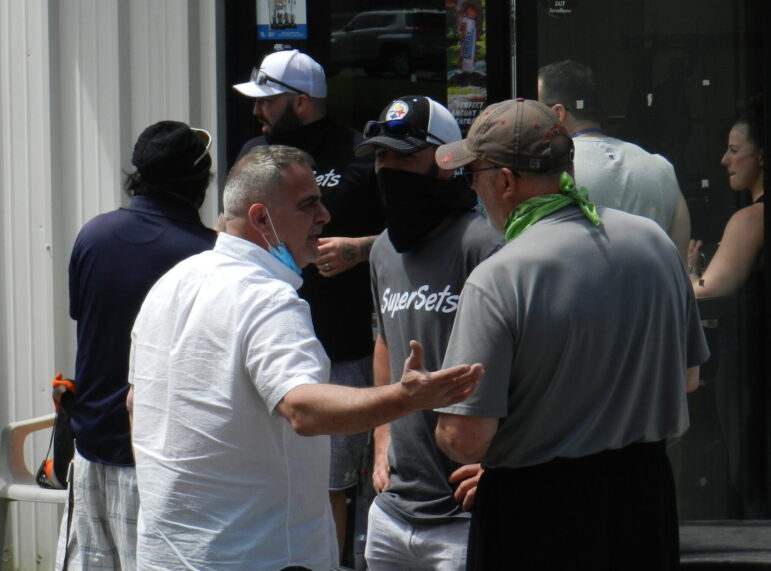 Supporters of SuperSets owner Ed Frack stand closely together while foregoing the use of face coverings as they talk outside his gym at 2450 Schoenersville Road in Hanover Township, Lehigh County, Sunday afternoon. Frack opened his fitness facility in defiance of a state disease prevention law that is in effect to help stop the spread of the novel coronavirus. Gym owner Ed Frack is pictured inthe background, wearing a white hat with glasses on it.

In a video posted ot SuperSets’ Facebook page Monday, Frack holds up the two citations he received but also cautions viewers against blaming the police who cited him.

The state troopers who responded to his gym “were very respectful people,” said Frack.

“They were simply doing a job that allows them to provide for their families,” he said. “I am truly disgusted by the fact that small business owners don’t have the same right or freedom to provide for their families. I am even more disgusted by the Pennsylvania government, who has done nothing to step up and help these small businesses who are slipping through the cracks of their system.”

“I appreciate all the support I’ve received over the past couple days,” he added. “We cannot win this war without you guys. So please, continue your support and swing on out and see us.” 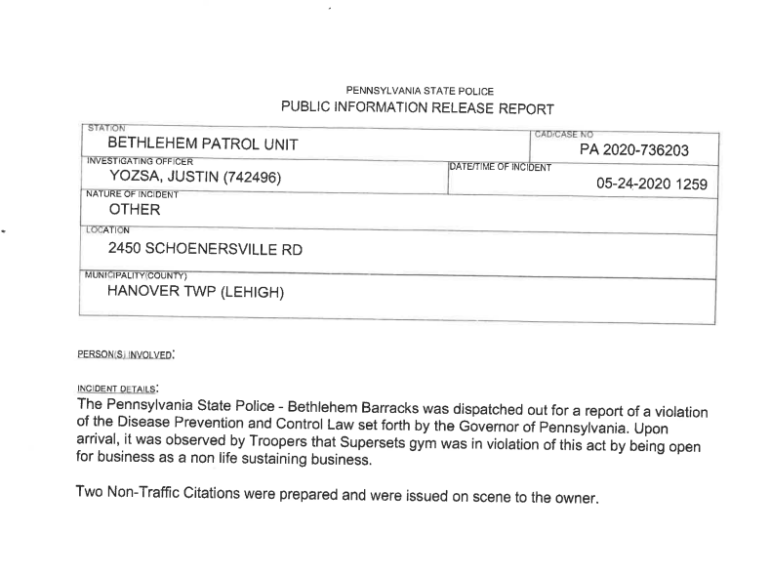