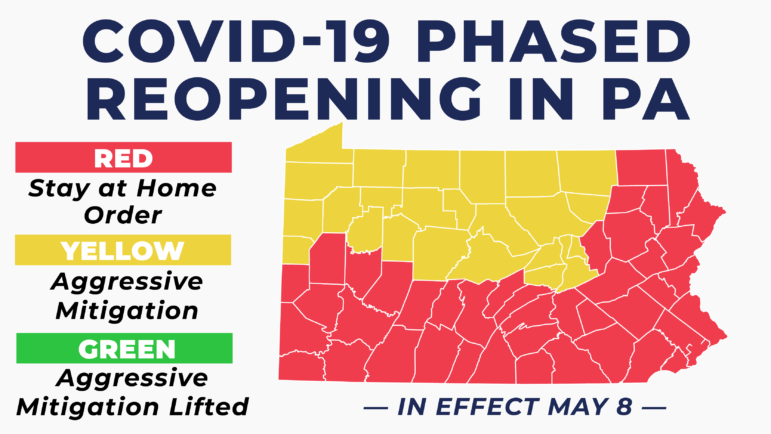 Gov. Tom Wolf announced Friday that 24 largely rural counties in the the north central and northwestern parts of Pennsylvania will begin to reopen May 8. The counties will move from a complete shutdown to a partial reopening due to relatively low COVID-19 case counts and because other data supports them doing that, the governor said.

Gov. Tom Wolf’s much-anticipated announcement about the start of the COVID-19 reopening process for Pennsylvania came Friday. In it was a list of 24 rural counties in the north central and northwestern parts of the state that will move from the red phase–which translates to a shutdown–to the yellow phase of the reopening process on May 8.

During the yellow phase of the reopening process some restrictions on work and social interaction are easeed while other components of the stay-at-home order–such as closures of schools, gyms and hair salons as well as limitations around large gatherings–remain in place.

According to Wolf’s three-phase Plan for Pennsylvania, the “purpose of this phase is to begin to power back up the economy while keeping a close eye on the public health data to ensure the spread of disease remains contained to the greatest extent possible.”

“These counties were deemed ready to move to a reopening–or yellow phase–because of low per-capita case counts, the ability to conduct contact tracing and testing, and appropriate population density to contain community spread,” Wolf said in a news release.

He announced that on Monday, May 4, his administration will release guidance for businesses that are permitted to reopen in the 24 counties.

“The guidance is being developed through collaboration with the affected counties, Team PA, the Department of Health, the Pennsylvania Emergency Management Agency, the Department of Community and Economic Development and the Department of Labor & Industry, among others,” the news release said. “Guidance will build on existing safety and building safety orders released in April.”

The following restrictions will apply to people working and living in the 24 counties during the yellow phase.

“Every human-to-human contact is a chance for the virus to spread, so more contacts mean a higher likelihood of an outbreak,” Wolf said. “If we see an outbreak occur in one of the communities that has been moved to yellow, we will need to take swift action, and revert to the red category until the new case count falls again. So, Pennsylvanians living in a county that has been moved to the yellow category should continue to strongly consider the impact of their actions.”

He added that counties that will remain under the stay-at-home order after May 8 will be considered for reopening in the next several weeks as the state continues to closely monitor metrics and collaborate with CMU, health experts and counties.

Among those counties are both Lehigh and Northampton, as well as the rest of southeastern Pennsylvania and most of the northeastern part of the state.

As of Friday, May 1, Pennsylvania was sixth in the nation in terms of the number of cases of the novel coronavirus confirmed by its Department of Health, with nearly 50,000 registered. More than 2,600 Pennsylvanians have also died in the COVID-19 outbreak.

In terms of caseloads by county, Lehigh County was ranked fifth and Northampton County was ranked eighth on the list of counties with most coronavirus cases as of Friday. The top 10 counties–all of which are located in eastern Pennsylvania–had 79.9 percent of the state’s 49,642 cases between them, according to the most current data.

The full reopening plan is available to read online on Governor Wolf’s website.