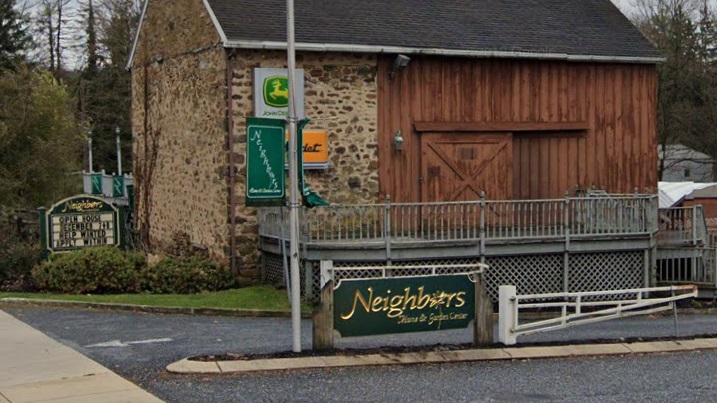 Neighbors Home & Garden Center on Main Street in Hellertown closed in the summer of 2020. A local developer now wants to construct nearly 150 apartments on the site. (FILE PHOTO)

A local developer is once again eyeing property in Hellertown borough for a large-scale residential and commercial project.

Members of the Hellertown Planning Commission heard plans from Greystone Capital Inc. to build a 142-unit apartment complex at the former site of Neighbors Home & Garden, located at 42 Main Street, at their Tuesday night meeting.

The developer plans on keeping the two existing stone buildings closest to Main Street, along with the existing barn to utilize as commercial space.

Greystone is known for other residential projects in the Hellertown area and the Lehigh Valley, such as Bethlehem Fields Apartments on Cherry Lane and Birchwood Commons Apartments in Bethlehem Township.

At Tuesday’s meeting, the developer presented plans to construct three, four-story buildings on the roughly 5.5-acre site. The buildings are currently designed to be between 46,000 and 50,000 sq. ft., and each would contain between 46 and 50 apartment units.

The newly-constructed buildings would be accompanied by extensive parking, with plans for 207 parking spaces, some of which would be covered.

Proposed plans for the Neighbors site include constructing three apartment buildings accompanied by 207 parking spaces. Developers plan on having some parking spaces covered, which are designated by a dark brown shade on this diagram.

Developers stressed that the proposed complex would have an emphasis on outdoor amenities, such as a large courtyard in the center of the three proposed buildings.

The developers also want to capitalize on the land’s proximity to the Saucon Rail Trail, and presented plans to install a bridge connecting their property to the trail.

The 50-foot-long, steel truss bridge would be accessible from Hellertown’s Tumminello Park. Developers are also considering adding a secondary trail access point, which would run through the apartment complex.

The developers described the target market for the apartment complex as “young professionals,” and subsequently the largest portion of the units would be studio and one-bedroom apartments.

“When we looked at Hellertown and did our market analysis and looked at what we thought was sufficient in the market, we came to the conclusion that we thought the market was terribly underserved of high-end studios and high-end one-bedroom (apartments),” said an official representing the developer.

They estimated that rent for the studio apartment units would be in the price range of $1,100 to $1,300 a month. 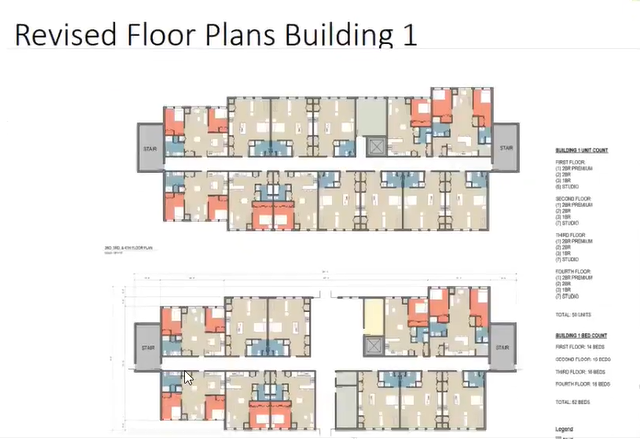 Developers also spoke to the perceived economic benefits of the project at Tuesday’s meeting.

“Obviously, there’s going to be a lot of trickle-down for adjacent businesses, because people in these projects we have also like to walk to where they shop and eat, and this is a good location to do that,” one representative said.

The developers claimed the site currently generates about $43,000 in annual taxes, of which just under $11,000 is paid to the borough. According to their calculations, the annual property taxes the new development would generate would be around $283,000, of which the borough would receive approximately $70,000.

The developers added that under their plans, the impervious land at the site would decrease from around 89 percent to 60 percent or less. 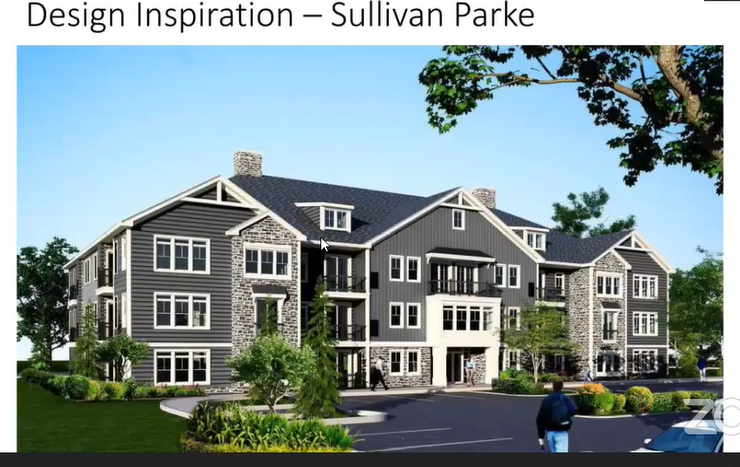 Representatives from real estate developer Greystone Capital Inc. said they plan to use building materials that are consistent with the aesthetics of existing structures on Main Street. They presented the Hellertown Planning Commission with this rendering of another project of theirs, Sullivan Parke Apartments in Forks Township, which they said they expect will serve as inspiration for three new buildings on the site of the former Neighbors Home & Garden.

The developer’s plans were met with mixed opinions from members of the planning commission. One of the chief concerns expressed by members was the potential effect the development would have on traffic in the area.

The builders said they plan on maintaining only the existing entrance to the property, but they do plan on adding a right-turn lane into the complex from Main Street.

The apartment complex would see similar rates of traffic to what Neighbors saw, they said, and they would continue to utilize a low-volume PennDOT permit for the entrance.

Low-volume permits allow up to 1,500 trips per day, and the developers estimated that the complex would generate around 700 trip ends per day.

The discussion at Tuesday night’s meeting was about a sketch plan submission, and no formal action was taken by members of the planning commission, which provided comments and recommendations to the developers.

Because the site under consideration is in the borough’s Shopping Center zoning district, Hellertown Borough Council would have to approve the plans for the project to move forward.

According to Hellertown Zoning and Code Enforcement Officer Kris Russo, the developer could ask council to advertise a development ordinance to be discussed at a future meeting.

“If they vote to advertise and set a meeting date, the applicant will then go back before (the) planning commission for a formal review and then appear before council at a special meeting before a regular council meeting,” Russo said. “At the special meeting, council will take recommendation from Borough Planning Commission, Lehigh Valley Planning Commission, staff and residents and then motion on accepting the proposal.”

At the special meeting, council could motion to accept or deny the proposal.

The next Hellertown Planning Commission meeting is scheduled for Tuesday, Oct. 12 at 7 p.m.

Representatives from Greystone Capital Inc., a local real estate developer, presented plans to members of the Hellertown Planning Commission on Tuesday for a 142-unit apartment complex at the former site of Neighbors Home & Garden. The plans call for three, four-story apartment buildings to be built on the roughly 5.5-acre property on Main Street near the Saucon Creek. The developers said they also plan on utilizing existing buildings at the site for commercial space.