Last week members of Upper Saucon Township’s Board of Supervisors approved plans to enter a licensing agreement with DeSales University for the construction of a pedestrian bridge along a stretch of the Saucon Rail Trail.

The two parties have each agreed to fund half of the cost of the bridge, which will span Preston Lane, it was announced at the township’s Aug. 23 Board of Supervisors meeting.

A footbridge spanning Preston Lane has long been sought by planners and rail trail travelers, as it would complete the “missing link” and make the trail a continuous, seven-mile route from Hellertown’s Bachman Street to Coopersburg’s East Station Avenue. 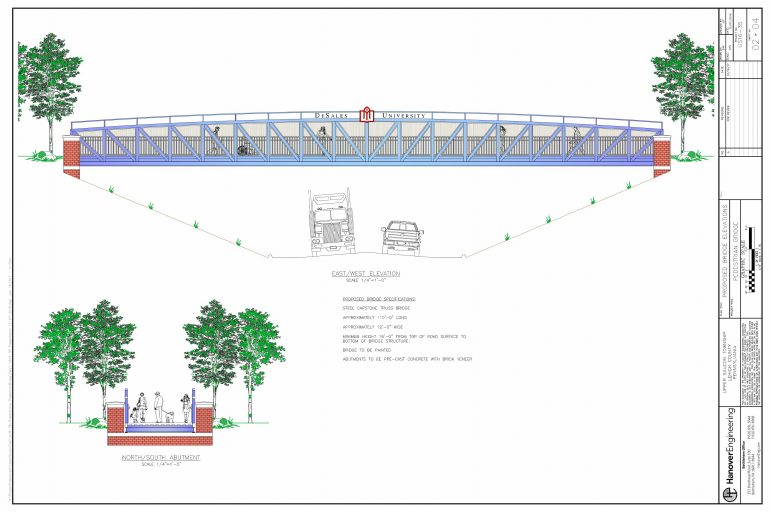 A rendering of the proposed rail trail pedestrian bridge spanning Preston Lane near the DeSales campus was shared at the Aug. 23 Upper Saucon Township Board of Supervisors meeting. The 100-foot-long, 10-foot-wide bridge will have two abutments on either end, and will be painted using DeSales University’s colors, name and logo.

As the Saucon Rail Trail currently exists, travelers must navigate trails through Upper Saucon Township Community Park if they wish to continue their route along the trail at Preston Lane.

The township said the park’s narrow, winding trails were not built for high-volume traffic, and thus present a safety hazard to those traveling the trail.

The project is also part of a larger vision to extend the Saucon Rail Trail from Bethlehem to Quakertown, Upper Saucon Township planners said.

Thomas Beil, Upper Saucon Township Manager, said the project has been on the township’s laundry list of projects for about five years. It came to fruition this year after the township approached DeSales University about the licensing agreement, Beil said.

The 100-foot-long, 10-foot-wide steel capstone truss bridge will accommodate both pedestrians and cyclists. Project plans include two abutments on either end of the bridge.

Due to the project’s location, officials from DeSales University believe the bridge will serve as a gateway to the campus and could be “constructed in such a way as to enhance the entrance to its campus,” the licensing agreement reads.

The agreement includes plans to construct a gateway structure on one end of the bridge. It also stipulates that the bridge be painted using DeSales’ colors–which are blue and red–and that it “be lighted and adorned with its name and logo.”

Beil said the project will go out for bid this fall.