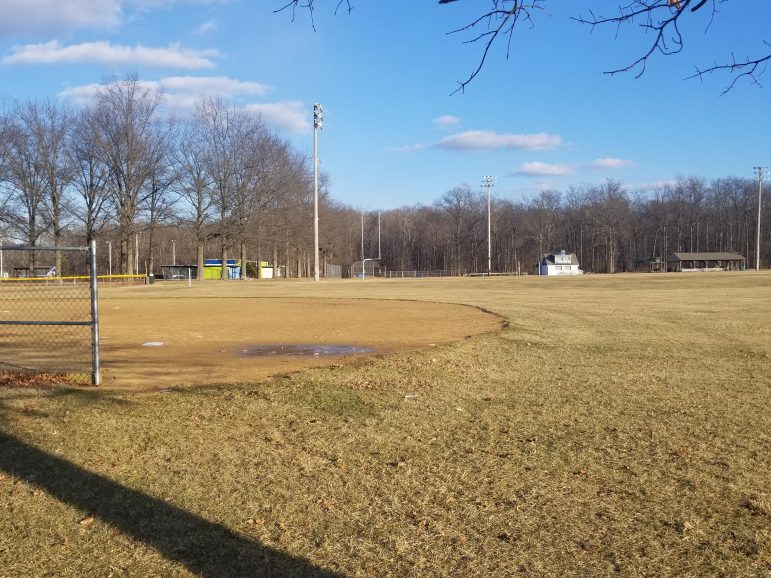 The athletic fields are a major draw at Southern Lehigh Living Memorial Park, which has been home to thousands of local youth athletic events over the past 75 years. Today the beloved park in Upper Saucon Township and Coopersburg is at a crossroads, as a small but dedicated group of local volunteers who maintain it seek additional support from the community.

It’s a place almost everyone knows exists thanks to its prime location along busy Rt. 309.

What few people know, however, is that Southern Lehigh Living Memorial Park in Coopersburg and Upper Saucon Township is not a municipal park or even a county park.

Created in 1945 as a 49-acre “living memorial” to area residents who served and died in World War II, it has the somewhat unique distinction of being owned and operated by a 501(c)3 nonprofit organization.

At 53, SLLMP board member Rob Uhl describes himself as the “whippersnapper” of the volunteer group that oversees and maintains the park; a group which includes his 80-year-old father and a number of other retirees who devote countless hours to it each year.

The average age of the volunteers as well as rising park maintenance costs were both factors in Uhl’s decision to raise awareness–and money–via a park GoFundMe page he launched last year; a page which so far has netted approximately $2,000 in donations.

The page describes the unique history of the park, which was initially funded with a donation of $1,000 from the estate of 19-year-old Private George W. Patterson, an Upper Saucon Township resident who died in 1945 while serving in the U.S. Army in France.

Patterson was originally from Clifton Forge, Va., and was adopted by a local couple–George Meeker Patterson and Sarah Belle (McKinnon) Patterson–according to a biographical entry on FindaGrave.com.

He is buried in Gettysburg National Cemetery and memorialized on a stone marker next to the park’s Living Memorial Community Building that was donated by local Lions clubs. 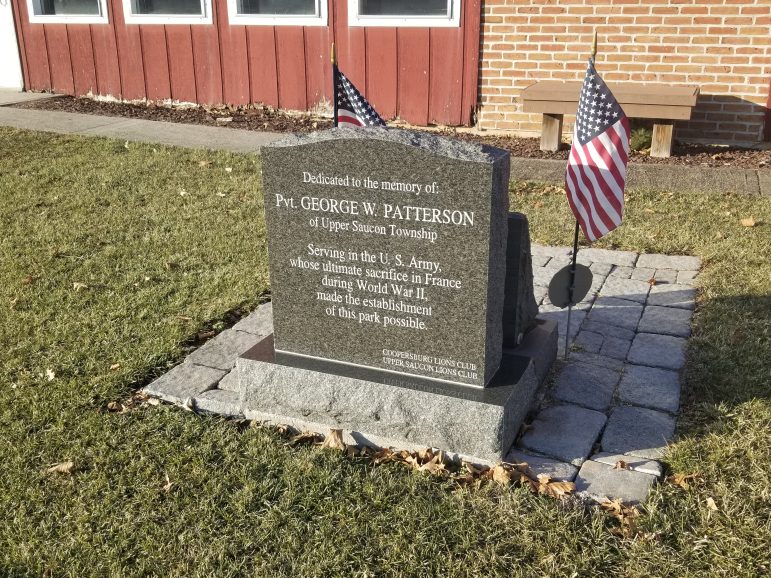 The estate of Private George W. Patterson–a 19-year-old Upper Saucon Township resident who died in service to his country during World War II–provided the some of the funding needed to found Southern Lehigh Living Memorial Park in 1945.

Uhl said he hopes community support for the park will continue, because its needs are significant; particularly considering the $50,000 annual budget volunteers must stretch.

Some of the money that has been raised so far is earmarked for a new tractor. The park’s current tractor, which Uhl described as being “held together with bubblegum and tape,” is more than 30 years old and needed nearly $2,000 in repairs last year alone.

The park’s playground equipment is also aged and has been vandalized “from time to time,” according to the “Help Our Park” GoFundMe page description. Additional donations will help pay for new equipment, Uhl said.

In addition to the local youth athletic associations that use its facilities, SLLMP receives some financial support from the municipalities that comprise the Southern Lehigh School District: Upper Saucon Township, Coopersburg borough and Lower Milford Township. However, Uhl hopes to find corporate sponsors to help offset some of the rising maintenance costs as well as pay for new and improved amenities in the future. For example, he said they would like to repave the parking lot and build another picnic grove. 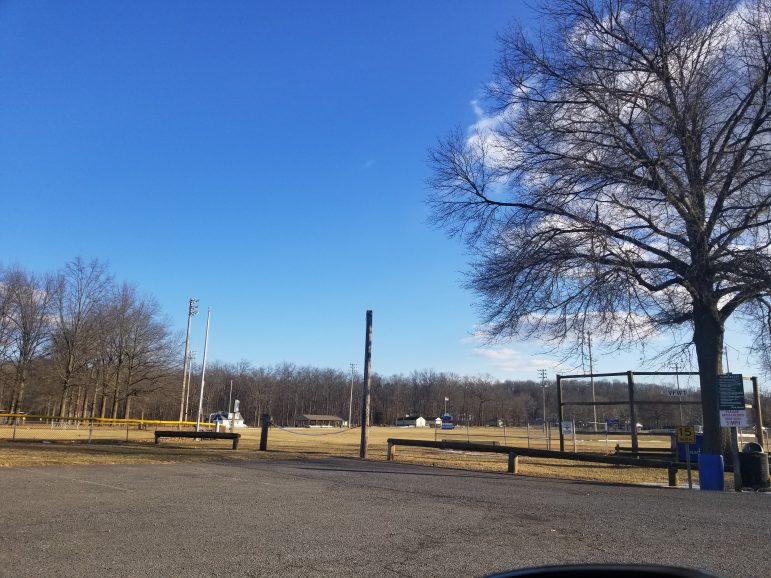 The main parking lot at Southern Lehigh Living Memorial Park is located next to the Living Memorial Community Building, across the street from the Giant shopping center in Coopersburg. The park’s 49 acres are home to athletic fields, a playground, pavilions, a grove, a community building and other amenities. The park is open daily from sunrise to sunset.

“We could not be more thankful for anyone who contributes even the smallest amount,” Uhl said.

He explained that in addition to donations from businesses and individuals, the board is looking at grant opportunities to help ensure that Southern Lehigh Living Memorial Park continues to fulfill the recreational needs of the community for at least another 75 years.

Two of the biggest annual events that are held in the park are Coopersburg Community Day in September and the VW Classic Car Show, which Uhl said is normally held the last Sunday in June. The coronavirus pandemic has forced organizers to cancel Community Day for two years in a row, but Uhl said they are hopeful it will be held in 2022. Currently, the VW Classic Car Show is scheduled to be held Sunday, June 26, he added.

The big events can draw “thousands and thousands of people” to Southern Lehigh Living Memorial Park if the weather is nice, Uhl noted.

For more information about volunteering in some capacity, he recommended messaging the park Facebook page he created and administers. Park pavilion reservations may be made by calling board treasurer Cindy Schaffer at 610-282-3914 and leaving a message.

The park does not have a physical address, but it is located on Rt. 309 (Third Street) between E. Fairmount and E. Landis streets in Coopersburg. The park property is divided between Upper Saucon Township on its east side and Coopersburg borough on the west. The popular Saucon Rail Trail runs is located just east of the park, and can be accessed via a trail that leads to it from one of its parking areas, Uhl said.

Uhl said he is currently working on developing a SLLMP website that will include a contact form and other information about the park, which he hopes to be able to share with the community in the near future. 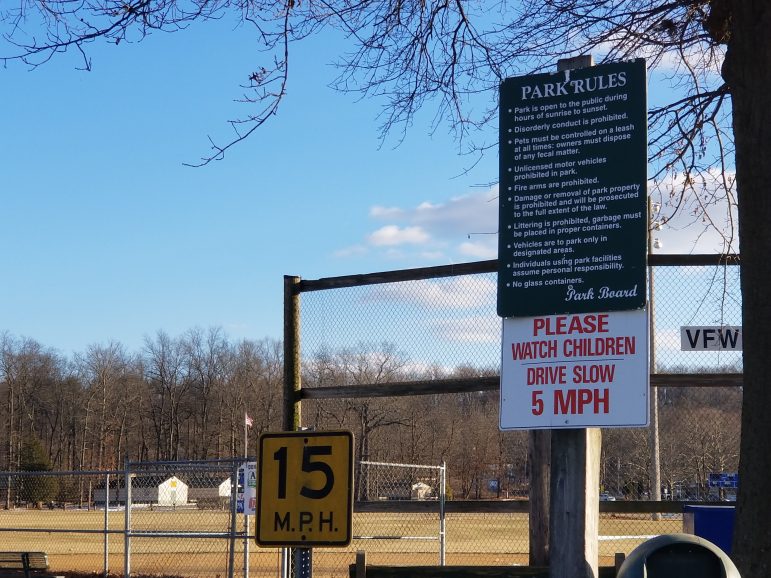 Signs posted in Southern Lehigh Living Memorial Park list the rules for park visitors and other information. The park is located in Upper Saucon Township and Coopersburg borough, and although it receives some financial support from both municipalities, it is operated by an independent nonprofit 501(c)3 association that traces its roots back to 1945. 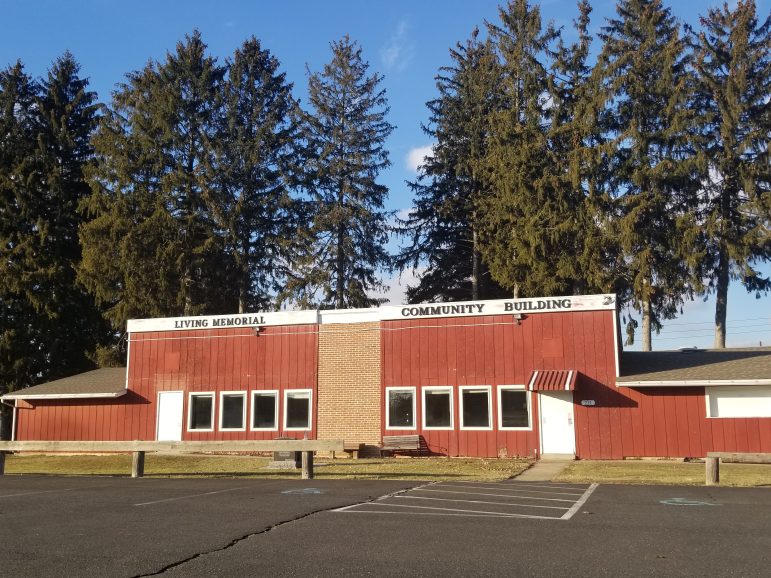 The Living Memorial Community Building is where meetings of the park board of directors and other organizations are held. Board member Rob Uhl said that as recently as the 1970s there were as many as 30 park board members. That number has dwindled substantially, as fewer and fewer people step up to volunteer their time to the 77-year-old organization.