With near record temperatures in the low to mid 60s, anyone working or exercising outside Wednesday could have broken a sweat on what easily felt like like an April day.

The calendar still says February, however, and Mother Nature is planning a rather abrupt return to seasonable temperatures along with snow, sleet and ice for Thursday and Friday.

The coming reality check is summarized in a winter storm watch the National Weather Service has issued for parts of east central Pennsylvania, including Northampton County, which notes that the storm has the potential to disrupt travel throughout the region.

The watch is in effect from 7 p.m. Thursday to 6 p.m. Friday, when it says three to six inches of snow and sleet along with up to two-tenths of an inch of ice could accumulate. 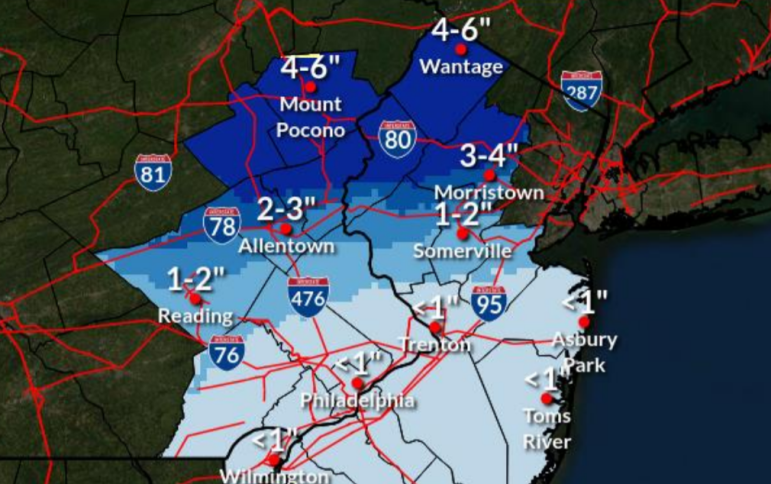 Pictured above: National Weather Service meteorologists issued a storm briefing containing a snowfall map for eastern Pennsylvania on Wednesday morning. According to a NWS winter storm watch that has also been issued, Northampton County residents can expect three to six inches of snow and sleet followed by up to two-tenths of an inch of ice beginning Thursday evening. No watches or warnings had been issued for Lehigh or Bucks counties as of mid-day Wednesday.

From Thursday evening through Friday afternoon, area residents should prepare for potentially slippery road conditions which could impact the morning and evening commutes, the statement said.

Localized power outages and tree damage are possible due to the ice, the NWS said.

If a power outage occurs in the Hellertown area due to the winter storm, it will be the third major outage to disrupt traffic, business and other important activities in less than a week. An outage Feb. 18 was caused by high winds that toppled trees and power lines, while another outage that affected thousands of residents Tuesday evening was apparently triggered by a transformer explosion in Lower Saucon Township.

In a Wednesday morning briefing about the approaching storm, meteorologists from the National Weather Service office at Mount Holly, N.J., said the worst of the winter weather is likely to be along and north of the I-78 corridor, which cuts through southern Lehigh and Northampton counties.

By Friday morning, frozen precipitation may transition to rain as far north as the I-78 corridor, which may be the dividing line between significant travel impacts to the north and unaffected roadways further to the south toward Philadelphia.

The next briefing from the NWS is expected to be issued by 5 p.m. Wednesday.

In the storm’s wake, temperatures are expected to return to near seasonal norms, with highs in the mid 30s to low 40s and lows in the teens through early next week.

Lehigh Valley and Bucks County residents should continue to monitor local news and weather outlets online and via social media for updates on the storm forecast.