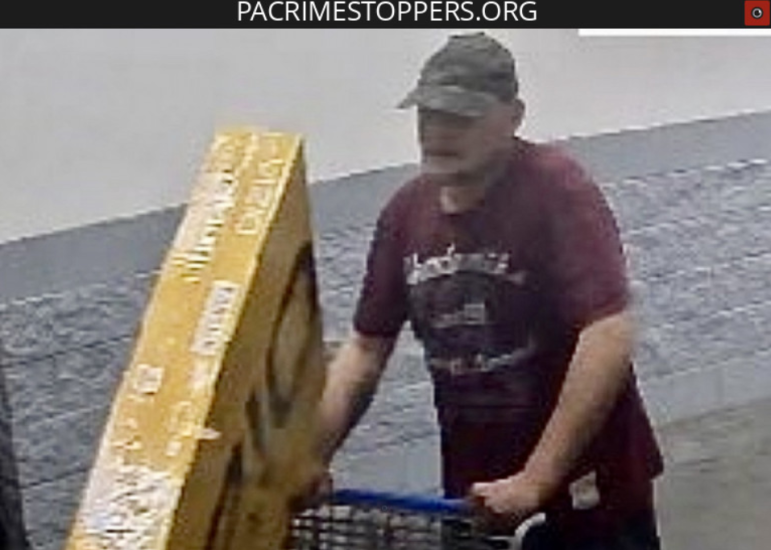 Colonial Regional Police and Pennsylvania Crime Stoppers want to identify the man pictured above, who they say stole a Vizio television valued at $288 from the Walmart on Rt. 248 in Lower Nazareth Township near Easton May 10. Tipsters could be eligible for a cash reward if their tip leads to the case being solved.

One local police department is investigating a shoplifting incident that occurred recently in a Walmart store’s electronics department.

According to Pennsylvania Crime Stoppers, the Walmart Supercenter at 3722 Nazareth Road in Lower Nazareth Township was the scene of the theft, which happened May 10 at 7:30 a.m. The store is in the Northampton Crossings shopping center at Rts. 248 and 33.

According to Colonial Regional Police, a man who was captured by Walmart store security cameras stole a Vizio television valued at $288 by placing it in a shopping cart and exiting the store without paying for it.

Anyone with information about the theft and/or the suspect is asked to contact the Pennsylvania Crime Stoppers by calling 1-800-4PA-TIPS (8477) or filling out an online tip form. All callers to Pennsylvania Crime Stoppers remain anonymous and could be eligible for a cash reward for information that leads to an arrest, the solving of a crime/cold case or the location of a wanted person/fugitive or missing person.