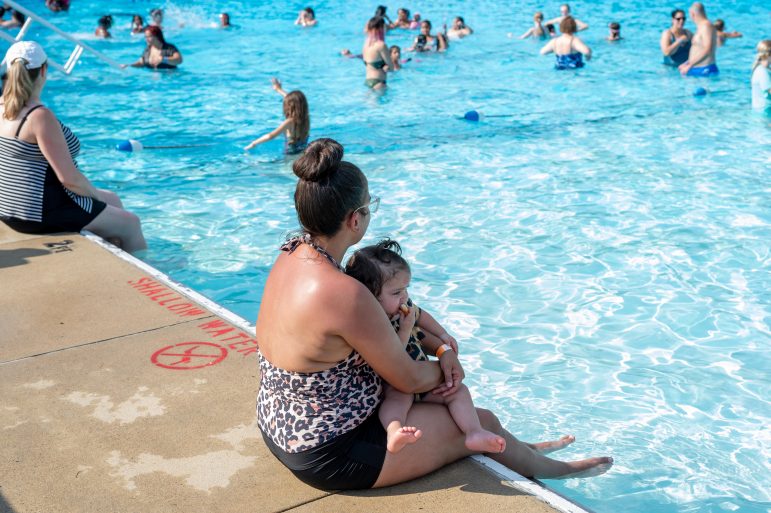 The Hellertown Pool is a popular place to cool off in the summer, but this year some residents are feeling cheated out of their “pool-time” due to staffing-related closures. Amid a second summer heat wave, the pool has been closed for three days in a row. Meanwhile, an increasing number of pool-goers are turning to social media to voice their frustation with the facility.

UPDATE: Pool management announced on Facebook Tuesday that the pool would be open with a modified schedule to allow for more break time for lifeguards. “The pool is open today–Aug. 9, 2022–with a modified swim plan,” the post said. “Swimming will be allowed for two to three hours. Then the water will be cleared for half an hour to allow the lifeguards a break and a chance to hydrate. This is a similar plan to other pools and amusement parks and this cycle will continue until further notice.” Tuesday’s high topped 90 degrees for the sixth day in a row, but some relief is in sight, weather forecasters say. Highs in the mid to upper 80s are expected Wednesday and Thursday, with highs in the low 80s and lows in the upper 50s to lower 60s expected this weekend.

For some Saucon Valley swimmers, this has become a summer of discontent.

Hellertown Pool season pass holders and others are upset that the pool has been closed since last week–despite near record temperatures amid a heat wave that began Thursday–and many are turning to social media to voice frustration over the situation.

Monday marked the fifth consecutive day with a high temperature of at least 90 degrees, and it was the third day in a row that the pool was closed due to what officials have called staffing issues.

According to recent Facebook posts on the Hellertown Pool page, the facility was closed on Saturday, Aug. 6 due to “staffing call offs.”

The following day, it was announced that the pool would remain closed Sunday due to “continued staff call offs.”

Finally, on Monday, pool management posted that “due to staffing shortages, the Hellertown Pool will remain closed today, Monday, Aug. 8.”

“We apologize to all patrons who look forward to enjoying the pool,” the post said. “We are doing are best to rectify this unfortunate situation.”

How the situation may be solved wasn’t disclosed, fueling speculation among pool-goers.

What exactly is causing the call-offs by pool staff has also been the subject of conjecture among Facebook users commenting on the recent posts, with some individuals attributing the staff shortage to COVID-19 and others blaming what they believe is a poor work ethic among some employees. Others have cited a lack of respect by pool patrons and management for pool staff as a possible motive for the staffing-related closures.

“My son was a lifeguard last year,” commented Sara Lambert on Monday. “At 15, he had to physically break up fights with grown women several times.”

“There was no accountability for call-outs,” Lambert wrote. “Availability was not honored. … So stop coming at the kids and start looking at people leading an environment of success. Even the post says ‘due to people calling out.’ Leadership is about ownership…own your business (and) stop blaming. If people are calling out look in the mirror and ask what can you change about your leadership to change your outcome.”

“So sad when a community can’t use their pool,” commented Ellen Fischer. “This never happened under the past management. I get that there may be call-offs, but then there should be additional guards available. Surely the YMCA can do better than this.”

A number of people commenting on the posts said they are season pass-holders and upset that after purchasing the passes in the spring, they haven’t been able to use the pool at times when it should have been open. Weather-permitting, the pool is normally open daily from noon to 7 p.m. from early June through late August.

This year’s swimming season began June 12, and the final day of the pool’s operation is scheduled to be Saturday, Aug. 20.

Meanwhile, temperatures are forecast to remain in the low 90s, as the Lehigh Valley remains under a heat advisory through Tuesday at 8 p.m.

“Hot temperatures and high humidity levels will increase the threat of heat-related health issues,” the National Weather Service said in a statement Monday. “Peak heat index values are forecast to reach 100 to 104 this afternoon and again on Tuesday afternoon. Low temperatures should favor the mid 70s, providing little relief from the heat at night.”

Assuming that Tuesday’s high again tops 90 degrees, this will be the second-longest heat wave of the summer, following an earlier heat wave that lasted from July 19 to July 25.

By the end of this week, high temperatures in the Allentown area are forecast to drop to around 80 degrees, which is closer to normal for this time of year.

Despite the recent closures, this year’s pool season began with promise in Hellertown.

In March, the borough announced that it would pay seasonal pool staff a bonus of $500 if they worked at least 200 hours over the summer. Borough manager Cathy Hartranft said at the time that with bonus-adjusted hourly wages of $11 to $11.50 an hour, new and returning lifeguards could earn more than $15 an hour.

Staff who worked until the end of the season would also receive $400 toward the cost of their lifeguard training certification, Hartranft said.

Other municipalities in the area have also struggled to staff their pools in recent years, including Fountain Hill borough, where a borough councilwoman last year returned to the lifeguard chair after a decades-long hiatus.

This year the Fountain Hill Pool was closed completely–at least in part due to staffing issues–and its future remains uncertain, as a grassroots community coalition seeks to solve the staffing woes and find funding to pay for necessary repairs and maintenance.

Fountain Hill residents were eligible to purchase Hellertown Pool season passes and daily admission bundles at reduced rates thanks to an intra-borough agreement.