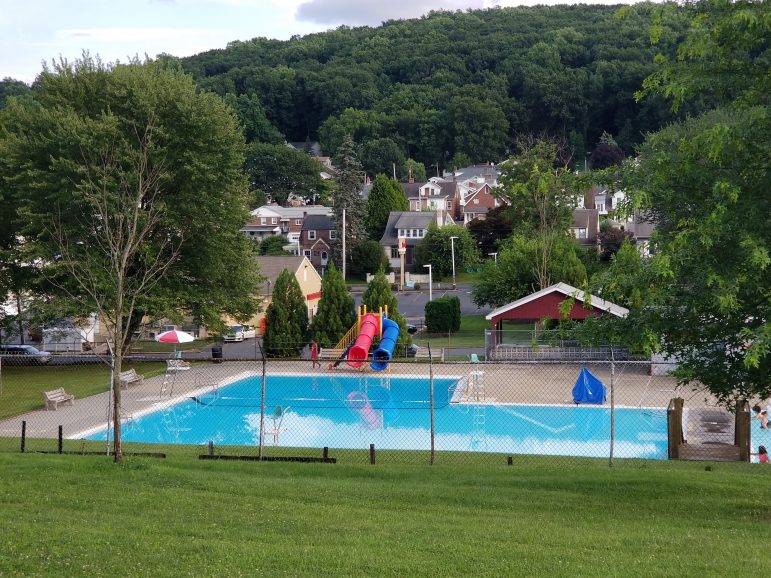 A meeting about the future of the Fountain Hill swimming pool drew residents to the Doctors Pavilion at St. Luke’s Hospital Monday, where borough council members heard opinions expressed about the 63-year-old recreational facility which is in need of repair.

The meeting began with a presentation by borough manager Eric Gratz which included the results of a resident survey about the pool that was conducted last fall.

A total of 250 residents took the survey, which among other things revealed the following:

The most division among residents was revealed in their answers to the two final questions, which were arguably also the survey’s most important:

Although 68 percent of residents said they support the use of their tax dollars to maintain the pool, a majority–60 percent–said they would not support a tax increase to cover rising pool maintenance costs.

Residents were nearly evenly divided on the question about converting the pool into a passive recreation area, with 52 percent opposing the idea and 48 percent supporting it. 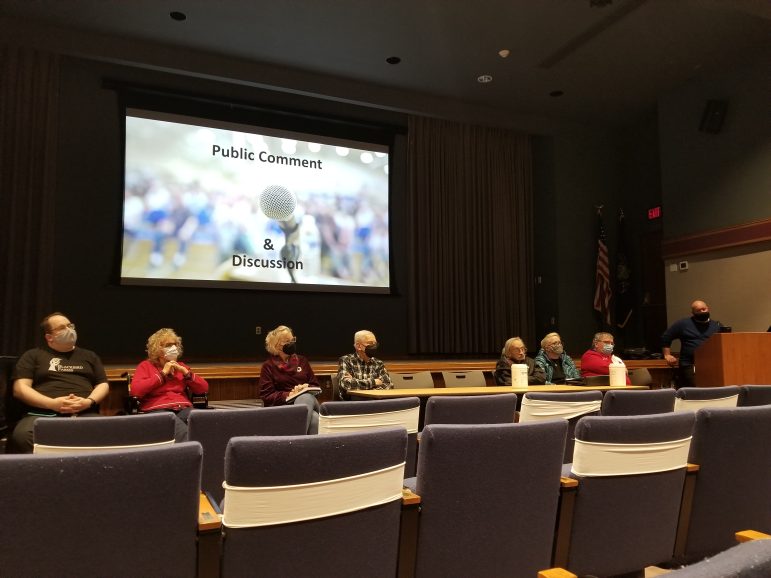 A meeting to discuss the future of the Fountain Hill Pool was held in the Doctors Pavilion auditorium at St. Luke’s Hospital Monday. Pictured above are the members of borough council and borough manager Eric Gratz (standing at podium).

Gratz’s presentation highlighted some of the most pressing maintenance issues at the pool, which include its aged plumbing and electrical systems, concrete decking that has cracked and wooden steps that are rotting.

The projected costs to replace the wooden steps and a patio area, to make spot repairs to the concrete pool deck, and to repair electrical wiring and shielding total approximately $23,000, and those items must be taken care of this year in order for the pool to open.

Valve leaks connected to the pool’s drain must also be repaired, at unknown expense.

Over the next two to three years, according to Gratz’s summary, it is estimated that the pool will need at least $65,000 in additional repairs to its concrete decking, plumbing and picnic pavilion. Other items that will need to be repaired or replaced that have not yet been estimated include the pool’s large filter tanks, its windows and a snack stand hood/fire suppression system.

Per Gratz’s presentation, options for dealing with the financial challenges the pool is currently facing could include–but aren’t limited to–one or more of the following:

Last summer, a lifeguard shortage that impacted other local pools initially put the Fountain Hill pool’s opening in doubt. The facility did open in June, but later than is typical, and with reduced hours and an abbreviated season due to ongoing staffing issues.

This year, Gratz said Fountain Hill must potentially offer pool staff higher wages in order to compete with nearby municipalities that are offering lifeguards pay rates of $14 to $16 an hour and are still having difficulty filling positions.

His presentation noted that the cities of Allentown and Bethlehem are competing for lifeguards with Dorney Park and Wildwater Kingdom, which is offering them $18 an hour, plus a sign-on bonus.

Residents who spoke at the meeting Monday generally seemed supportive of finding a way to keep the pool open by funding the needed short-term repairs, as well as looking at ways to make the pool’s operation financially feasible in the long-term.

However, they were also wary of the financial problems presented by the pool. 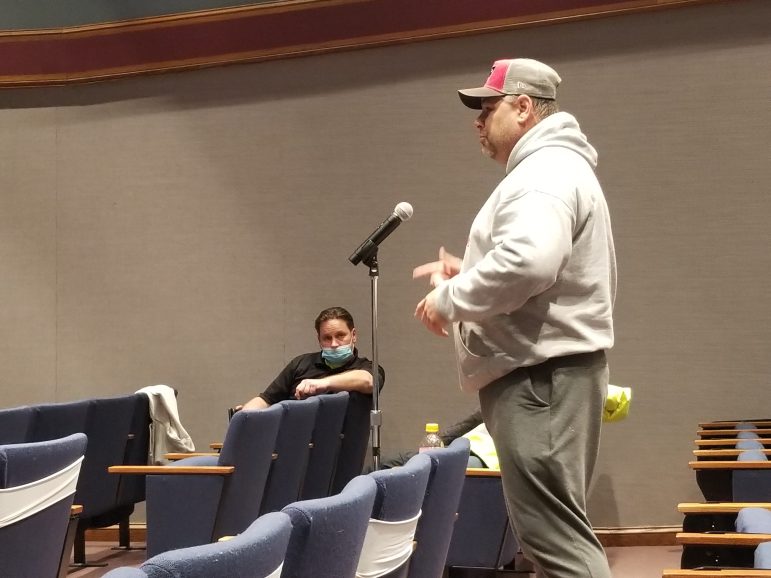 “I’m all for anything that’s not going to raise taxes in the borough,” said Ron Ferencin, who suggested that borough officials investigate enclosing the pool to allow for year-round operation and–potentially–additional revenue.

“The bottom line is this borough needs more revenue,” he said. “Spend the money, get grants, whatever, and make a big, huge community pool.”

Borough council president Norm Blatt said the Fountain Hill Pool wasn’t purpose-built to be enclosed the way pools in Bethlehem Township and other nearby municipalities are, and questioned whether putting a roof on it would even be feasible.

Borough resident Jodi Ireland cited recent renovations to Bethlehem’s Memorial Pool that cost millions of dollars in questioning the cost of a community center that would include a renovated pool.

“(I would) prefer not to pay more than I’m already paying” in taxes, she told officials.

A professional grantwriter, Ireland also offered her services to the borough on a pro bono basis, if officials decide to pursue grants to help keep the pool a part of the borough. 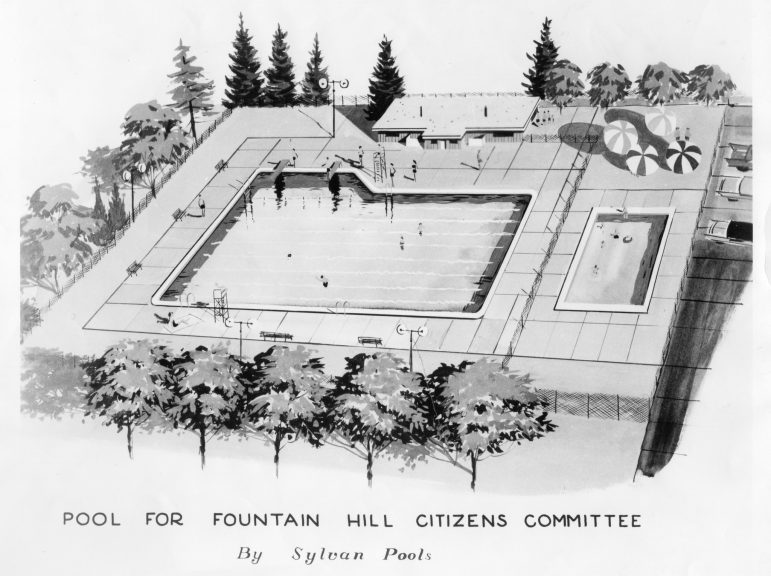 Credit: You Know You Are From Fountain Hill/Facebook

A late 1950s rendering depicts the Fountain Hill Pool, which was built after residents successfully raised $30,000 to fund its construction. Today, the pool is facing numerous financial challenges, including costly projected repairs and staffing issues.

The Fountain Hill Pool opened in 1959, after a citizens committee raised $30,000 to fund its construction. Recent posts on the Facebook page “You Know You Are From Fountain Hill If…” include a photo of a letter soliciting donations from borough residents, an artist’s rendering of the proposed pool and vintage photographs of the facility.

The pool has been on shaky financial ground since before the coronavirus pandemic, and like most municipal swimming pools it was closed due to the pandemic during the summer of 2020; a shutdown which did not contribute to its financial sustainability.

No decisions were made at Monday’s meeting, and Blatt recommended that residents follow the borough on Facebook and attend future borough council meetings to remain apprised of the various issues related to the pool’s opening and its long-term operation.

The next borough council meeting will be held Monday, March 7 at 7 p.m. at Borough Hall.