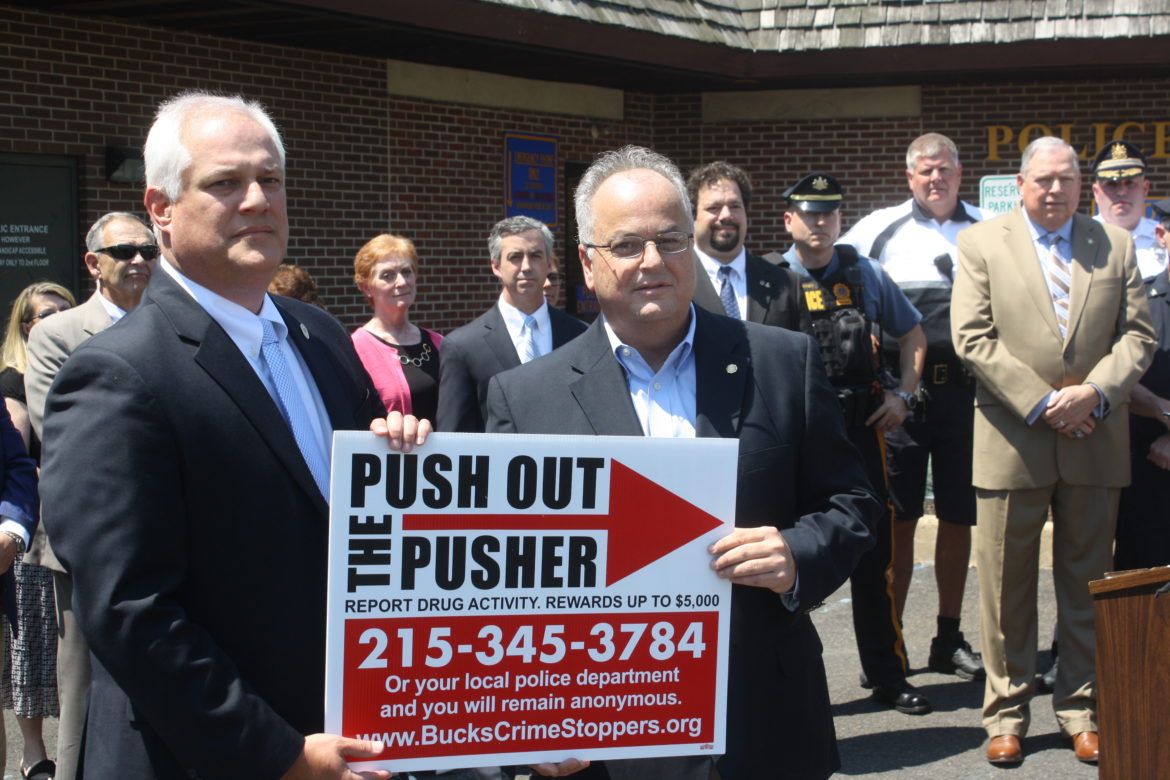 Editor’s Note: This article is republished with permission from LevittownNow.com.

The red and white sign that officials hope will be appearing in a yard near you reads: “Push the pusher out.” 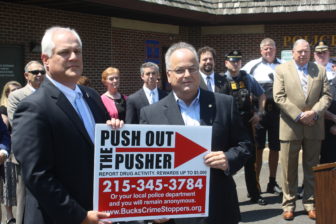 He noted the sign is part of a Bucks County Crime Stoppers and law enforcement program to crack down on drug dealers who are fueling the local drug epidemic.

“This is our offensive in the war on heroin,” Galloway said, adding the program will stretch the entire length of the county.

“This sign represents everything to us. It means everything,” the state representative said.

Officials briefed reporters and the public on saturation efforts throughout the county to bring awareness of the campaign to a high point.

The goal of the Push the Pusher campaign is to reduce heroin overdose deaths and the presence of drugs in communities.

“Heroin knows no boundaries and we have to take this fight wherever we find heroin,” Bucks County District Attorney Matt Weintraub said.

The signs that Weintraub, Galloway and others plan to place around the county list the website and a phone number people can call to report a drug dealer. Upon conviction of a drug dealer, rewards of up to $5,000 will be paid out to the tipster.

So far, 100 signs have been given out and more than $10,000 had been raised to help fund Bucks County Crime Stoppers by the official start of the campaign Thursday morning. Galloway said their goal by summer 2018 is to raise $100,000.

Melanie Bidlingmaier, who works in Galloway’s office, will be helping lead the program and raise funds to support Bucks County Crime Stoppers.

Bucks Crime Stoppers is following the structure and model of a similar organization from the western part of the state. Cambria Crime Stoppers was founded by Gary Martin, and in the time since they have begun working to push out drug dealers, the effort has been successful.

“Today we send the message to the drug dealers that this is no longer business as usual,” Martin proclaimed before presenting a $500 donation to the program.

Thursday’s announcement came around the same time Middletown police received word that a heroin sample they tested came back positive for traces of fentanyl, a synthetic opioid pain reliever federal officials say is much stronger than regular heroin.

Leaders from the Bristol Borough, Bristol Township, Falls Township, Middletown and Langhorne police departments were in attendance with state police and chiefs from around Bucks County.

Recently, Weintraub received approval to hire six new Bucks County Detectives who will be assigned to a strike force that will target illegal drugs. The new hires, who will cost about $800,000, will add to the ranks of the 17 current county detectives, whose duties vary between leading their own investigations, assisting local and federal departments, working with prosecutors and handling wiretaps.

Bucks County has targeted the drug epidemic in the past and cracked down on several drug dealers responsible for the amount of opioids pouring into the region. In recent years, county detectives have worked with outside agencies and municipal officers to try to trace drug supply chains to their routes.

Weintraub has worked the circuit and held town halls throughout the county over the past few years to warn neighbors about the opioid epidemic hitting the region.

Galloway said the new program will engage the problem by getting the community involved at a time when police are overwhelmed and lawmakers are limited in what they can do.

By the end of their press conference, officials said they had one message for drug dealers: “Business as usual is over.”