The historic Meadows Road Bridge was built in 1858 and is owned by Northampton County. It has been closed to traffic since an April 2018 determined that it was unsound. Many area residents want the bridge to reopen or a replacement to be built, since its closure has increased congestion on other local roads. (FILE PHOTO)

The historic Meadows Road Bridge was built in 1858 and is owned by Northampton County.

Traffic in and around Hellertown and Lower Saucon Township just got more complicated.

The township announced Thursday that the Meadows Road Bridge is being closed immediately and indefinitely following an annual inspection by officials from Northampton County, which owns the bridge.

Signs are now posted around it to detour traffic away from the area.

According to Lower Saucon Township, Superintendent of Bridges at Northampton County Tom Koehler said Thursday that the historic stone arch bridge will be closed until further notice after the annual inspection uncovered “serious deterioration” and it was determined the bridge is unsafe for vehicular travel.

The county has “no idea how long the bridge will be closed,” but will keep local officials apprised of the situation, the township said in its Facebook post.

Built in 1858, the Meadows Road Bridge is one of the oldest bridges in use in the area and is an important span across the Saucon Creek, just south of Hellertown.

Although its weight limit had been reduced to six tons and its single-lane design is antiquated–requiring opposing traffic to stop at either end and wait for oncoming traffic to cross it–the bridge is heavily used by motorists traveling to and from Rt. 412.

The bridge is also prone to flooding, and has been inundated with flood waters during major storms such as Hurricane Irene in 2011. 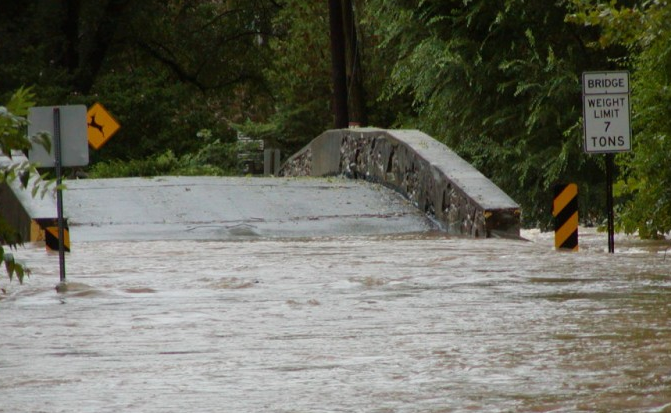 The Meadows Road Bridge is shown flooded in August 2011, when the remnants of Hurricane Irene inundated the area.

The nearest bridge to the north of Meadows Road is about half a mile away at Walnut Street in Hellertown.

The next crossing to the north is at Water Street, where a 1938 bridge owned by PennDOT has been determined to be structurally deficient and is scheduled for replacement during the summer of 2019.

During that time, the bridge will be closed for approximately two months.

Another closed bridge in the area–the Seidersville Road metal truss bridge west of High Street in the City of Bethlehem–is also owned by the county.

The Seidersville Road Bridge has been closed since 2011 and county officials have previously stated they have no plans to repair or replace it.

South of Meadows Road, the next crossing is at Bingen Road.

A historic bridge in between Meadows Road and Bingen Road at Old Mill Road is open only as a pedestrian crossing.