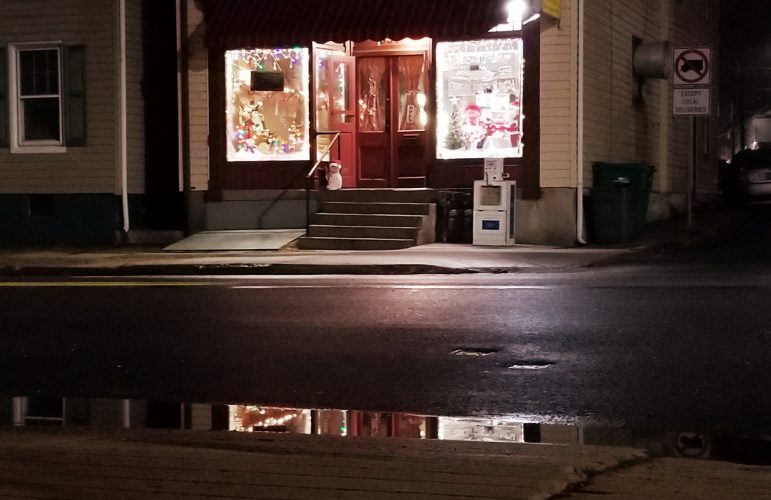 Christmas lights in the front windows of Mike’s Kids Doggie Shop on Main Street in Hellertown are reflected in a puddle, after more than an inch of rain fell on Friday, Dec. 28, 2018, near the very end of a very wet year.

If you had to summarize the local weather this past year with a single word, most likely it would be “wet.” And you wouldn’t be mistaken in characterizing 2018 as soggy.

According to official National Weather Service climate records at Lehigh Valley International Airport and in Allentown that date back to 1922, this has been the third wettest year on record, with nearly 66 inches of precipitation measured as of Dec. 29.

And there is still more rain in the forecast for New Year’s Eve.

In a typical year, the Lehigh Valley receives about 45 inches of rain (that total includes the liquid equivalent of any snow that falls during the year), so this year we’ve officially received nearly 50 percent more precipitation than average. And in some places that percentage may be higher, as rainfall rates can vary considerably across a short distance.

For the most part the Saucon Valley was spared from widespread destructive flooding, as the rain and snowfall events were sufficiently spread out to allow for some drying of the ground and for the levels of local creeks and streams to recede in the interim. But in August, serious flash flooding did strike parts of Lower Saucon Township, including the areas of Kunsmans Corners and near the Meadows, where an entire wedding party had to be rescued from the banquet hall after flood waters quickly filled the facility’s parking lot. 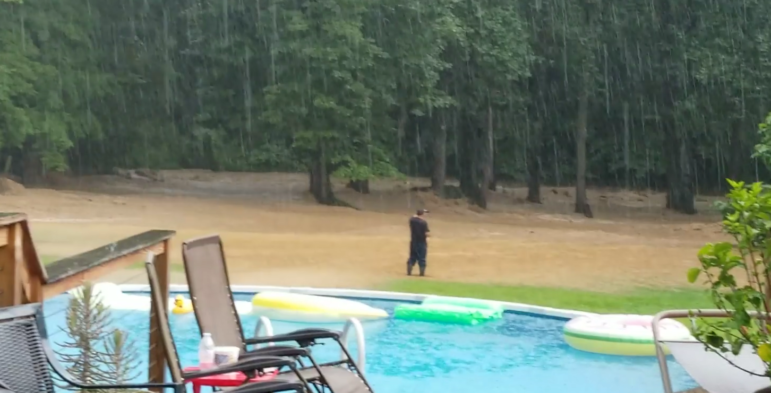 That weather event and others also threatened the structurally deficient, 80-year-old Water Street Bridge in Hellertown, which was temporarily closed several times for inspections after flood waters surrounded it. The bridge is scheduled to be closed and replaced this summer, which will necessitate a detour for local drivers for two months. 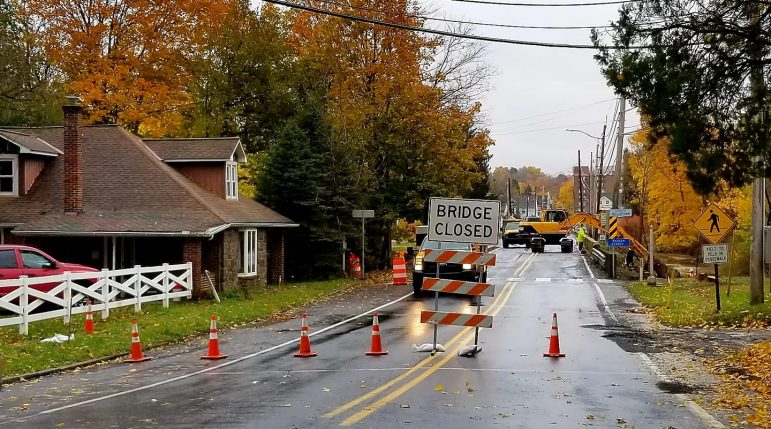 PennDOT crews remove debris from underneath the Water Street Bridge in Hellertown after flooding in early November 2018.

At other times throughout the year the rainfall meant flooded basements and yards, particularly in areas that have known stormwater runoff issues, such as the Colesville Road area and along Hickory Hill Road in Lower Saucon Township.

Activities and outdoor events were significantly impacted by the wet weather all throughout the year.

Originally scheduled for a Thursday night in mid-October, the bonfire was rescheduled twice, but rain on the rescheduled dates made it impossible to light it. It is possible the bonfire will be lit in conjunction with an athletic event in 2019, if there is an opportunity for the wood to sufficiently dry out, Saucon Valley Athletic Director Bob Frey said.

Over the summer two free concerts presented by the borough and the Hellertown-Lower Saucon Chamber of Commerce also had to be rescheduled after heavy rain forced their postponement. And many other outdoor community and athletic events were impacted.

Tell us: Did the ‘wetter-than-normal 2018’ affect you and your activities? Did you experience flooding, either at home or while driving? Tell us about it in the comments.