You’ve probably heard of a Bookmobile, but have you ever heard of a “book bike?”

A book bike is a modified tricycle with one wheel in the back and two wheels plus a large cart in the front, and it could be coming to a neighborhood near you.

The Hellertown Area Library is currently trying to raise $4,000 to purchase a book bike, which will be used by children’s librarian Andrea “Miss Andrea” Milliren to take books and storytimes into surrounding neighborhoods and parks, the Hellertown Pool, Saucon Valley schools and other locations. To date more than $500 has been raised for a book bike.

As more money is raised, Milliren is following a “path” around town on a special map made by a library volunteer, Carol. The map provides a visual means of measuring how much progress has been made and how further the campaign has to go toward its goal. 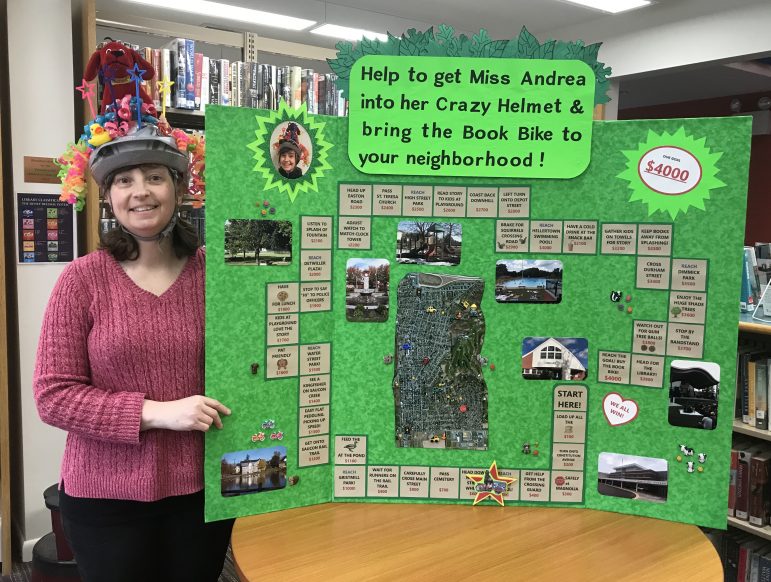 Hellertown Area Library children’s librarian Andrea Milliren stands next to a handmade map that is being used to track the library’s fundraising toward a goal of $4,000. That money will be used to purchase a ‘book bike,’ which Milliren will use to take reading materials and storytimes out into the community.

“When we’ve reached our goal, our book bike can be ordered,” Milliren said, noting that an added incentive for supporters is that she’ll then be able to wear her “crazy bike helmet and start visiting neighborhoods.”

The book bike will be custom built by Haley Tricycles in Philadelphia, and Milliren said it’s believed that it will be the first book bike in this area.

In addition to prescheduled storytimes, she said she will stop and read to kids who are outside. She will also carry lots of extra books that families can officially check out, although the books will need to be returned by patrons to the library. New library cards can also be issued right at the bike. An example of a book bike. Milliren said the Hellertown Area Library’s book bike will be “more colorful and exciting” than this one, which was built by Haley Tricycles of Philadelphia.

“We are asking kids and adults to help us name the book bike,” Milliren explained.

If you come up with a clever name you can fill out a suggestion paper at the library.

A book bike is the first step in the Hellertown Area Library’s new community outreach program called “Library-to-Go,” which is designed to take the library into the community!

For more information or to make a donation, stop by the library at 409 Constitution Ave., Hellertown, PA 18055, call 610-838-8381 or email youthservices@hellertownlibrary.org.

One thought on “‘Book Bike’ Will Bring Reading, Storytimes to Hellertown”