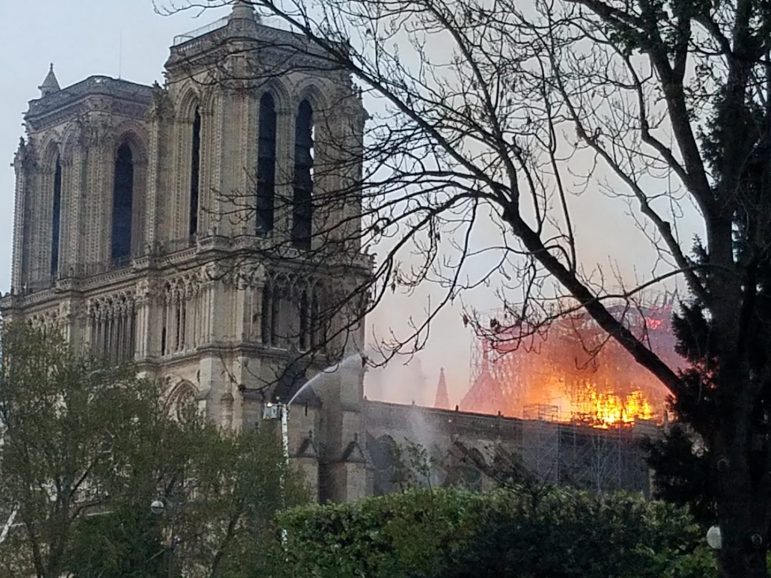 Retired City of Bethlehem firefighter Chris Eline captured this image of the Cathedral Notre Dame de Paris in flames on Monday, April 15, 2019. Eline is on a European vacation and happened to be in the City of Lights to witness the historic and tragic blaze.

A recently-retired City of Bethlehem firefighter who is visiting Europe as a tourist was a witness Monday to the destruction by fire of one of the world’s great architectural treasures: the Cathédrale Notre-Dame de Paris, which he said he has heard may be declared a “total loss” once dawn arrives in the city.

Chris Eline described the scene in the city of lights early Tuesday morning in solemn terms.

“People are gathered together, like with any tragedy,” he said at 7 p.m. EST, which is 1 a.m. in Paris. “The streets were mobbed, but it has thinned out a little. Lots of police (are) around.”

Earlier on Monday Eline was interviewed by NBC10 Philadelphia for a news story that will air on the station’s 11 p.m. broadcast.

On Monday he posted on his Facebook page that “thousands are watching with us as this world treasure is destroyed by fire. Most are silent, some singing, and a few sobbing. It’s terrible. I’m so sad for the French people.”

Some of the Parisians filling the streets were singing hymns as they watched one of their country’s most beloved symbols succumb to the flames, he said in a post in which he also shared video of the fire and of the reaction by onlookers.

Less than a day before the fire broke out in the nearly 700-year-old Gothic cathedral, Eline posted an image in which he juxtaposed a photo taken of himself in front of the cathedral in 1990 with one taken in the exact same place in 2019.

Chris Eline shared this haunting montage of photos of himself as a 22-year-old sailor and a tourist in 2019–both taken in the exact same spot in front of the Cathedral Notre Dame de Paris–just hours before the Gothic architectural masterpiece caught fire and was all but destroyed in Paris on Monday, April 15, 2019.

In addition to being a traveler, Eline is also a local historian and author.

Eline was a firefighter for the Bethlehem Fire Department for more than 25 years before retiring earlier this year.

With his interest in history, he developed a reputation as the “curator” of the Bethlehem Fire Department’s history, photos and artifacts.

As of Monday evening, the cause of the fire at the cathedral had not yet been disclosed. However it has been reported that French president Emmanuel Macron has already announced plans to rebuild the great edifice. 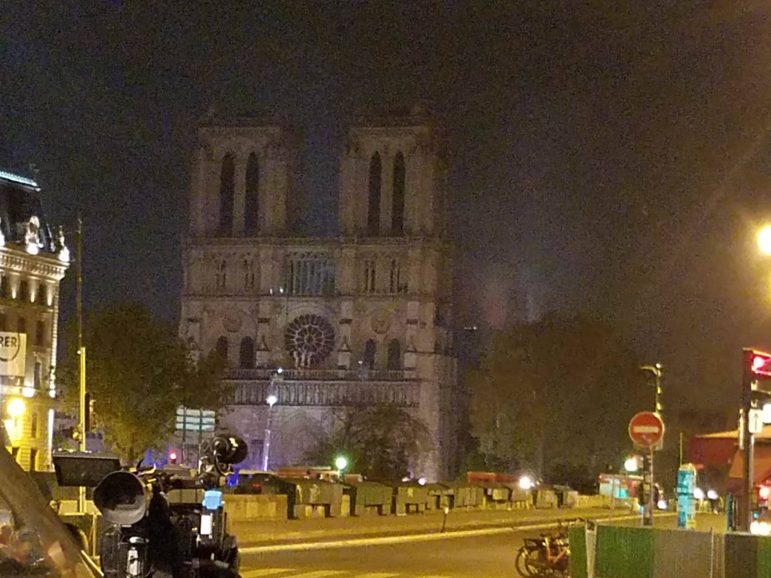