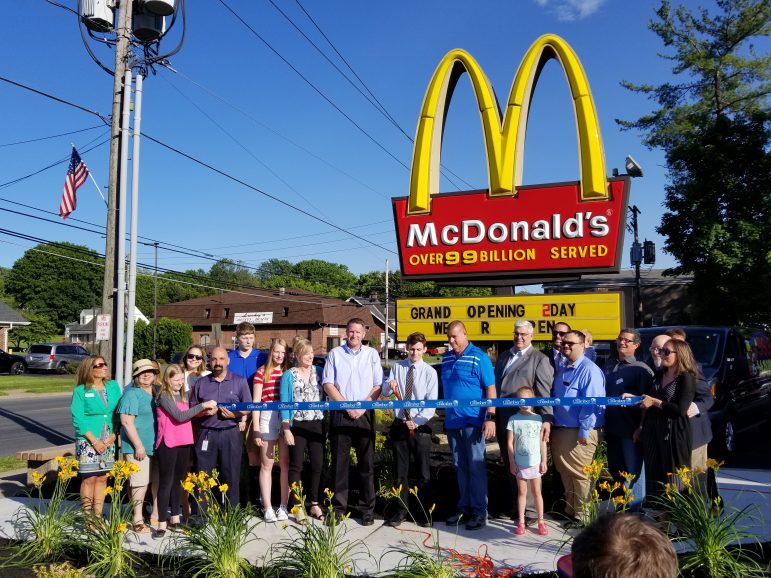 Hellertown McDonald’s franchise owner Jim McIntyre prepares to cut the ribbon to mark the restaurant’s reopening following a major renovation. He was joined by his family as well as Hellertown-Lower Saucon Chamber of Commerce board members and local elected officials for the ceremony Monday.

For those who’ve been missing their Hellertown McDonald’s trips, the wait is over.

The restaurant at 14 Main Street was closed for nearly a week while an extensive remodeling project that began in mid-April was completed.

Its drive-thru reopened over the weekend, and the entire store was open for business by Monday afternoon, which was when a ribbon-cutting ceremony and grand reopening celebration were held outside with the Hellertown-Lower Saucon Chamber of Commerce.

Officials from the chamber, the borough and Lower Saucon Township were on hand, along with customers who were enjoying their first local McDonald’s meal in a while.

“I realize what a huge accomplishment something like this is,” he told him. “We wish you a lot of continued success.”

The newly-renovated McDonald’s features a reconfigured front counter/lobby area, drive-thru menus that are displayed on LED screens, a self-service ordering kiosk, new seating and wall treatments and a wall that separates the front counter from the kitchen. The entire restaurant parking lot was also repaved, with new landscaping added. 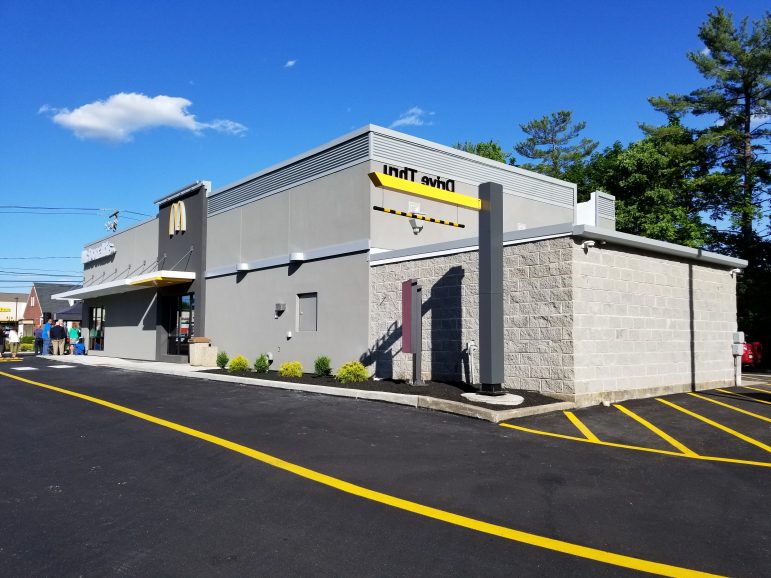 The north side of the newly-renovated Hellertown McDonald’s.

He called the McDonald’s which has been open since the early 1980s “a fixture” in the borough.

“We owe a lot to the McIntyres and the people who give great service,” Heintzelman added. 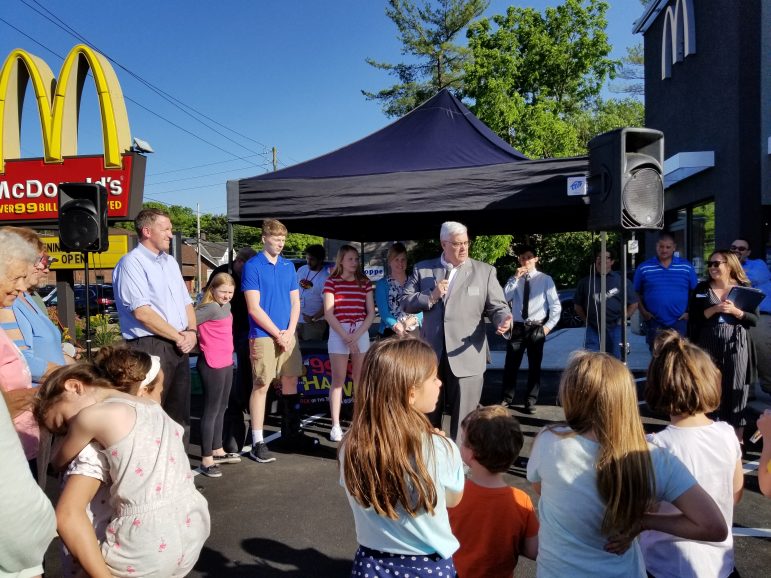 Hellertown mayor David Heintzelman speaks at the ribbon-cutting ceremony for the McDonald’s.

Jim McIntyre thanked his store supervisor, Darius, and store manager, Sylvia, for assisting him with the extensive coordination it took to keep the restaurant open and running smoothly during the first six weeks of the renovations.

In the end it was necessary to fully close the McDonald’s for a brief period of time to complete the work that has resulted in a building with a completely new look and feel.

“It’s been a struggle,” McIntyre acknowledged, “but we finally got here.”

In celebration of the reopening, the Hellertown McDonald’s is offering customers daily specials through Friday, including 49 cent hamburgers and 59 cent cheeseburgers (Monday), $2 Big Macs (Tuesday) and a free medium drink and fry with a Worldwide Favorite Sandwich purchase (Wednesday through Friday).

The store is also hosting a raffle, and giveaways and prizes will be offered all week. 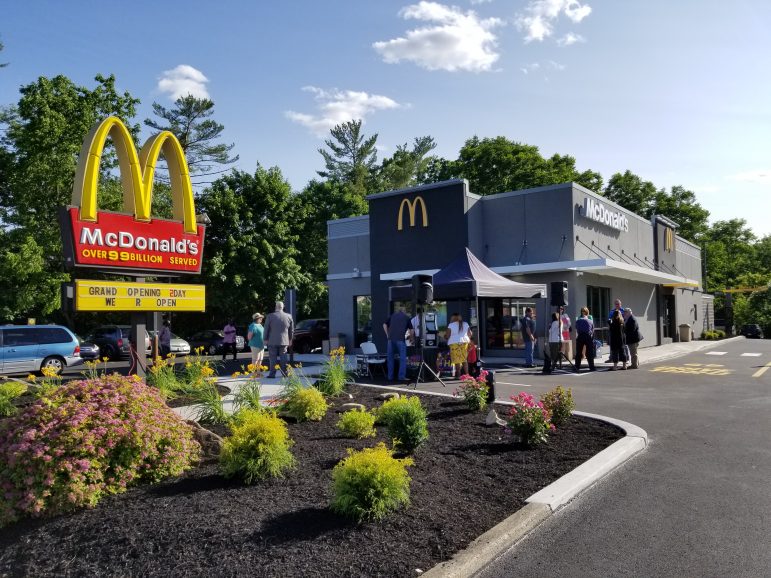 The newly-renovated Hellertown McDonald’s is located at 14 Main Street, Hellertown, Pa. The store opened in 1982 and had its last full remodeling about 15 years ago. 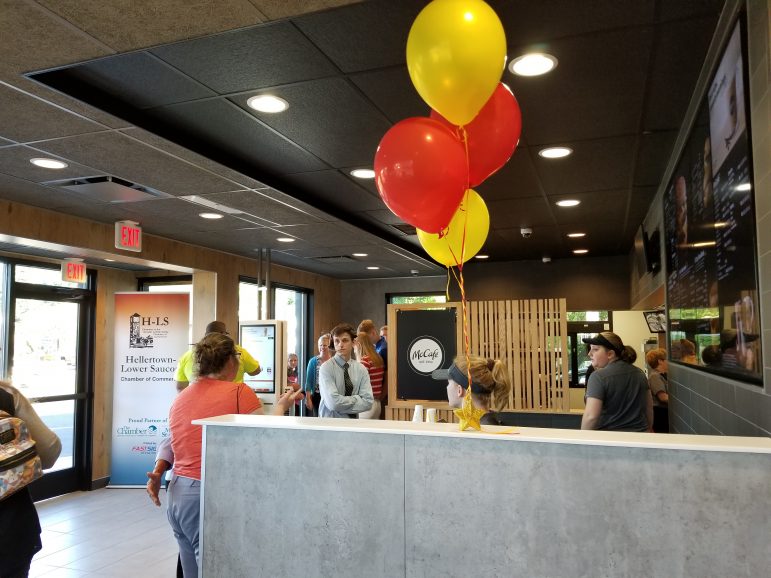 Balloons filled the interior of the newly-reopened McDonald’s dining room, where an event for St. Theresa School was being held Monday afternoon. 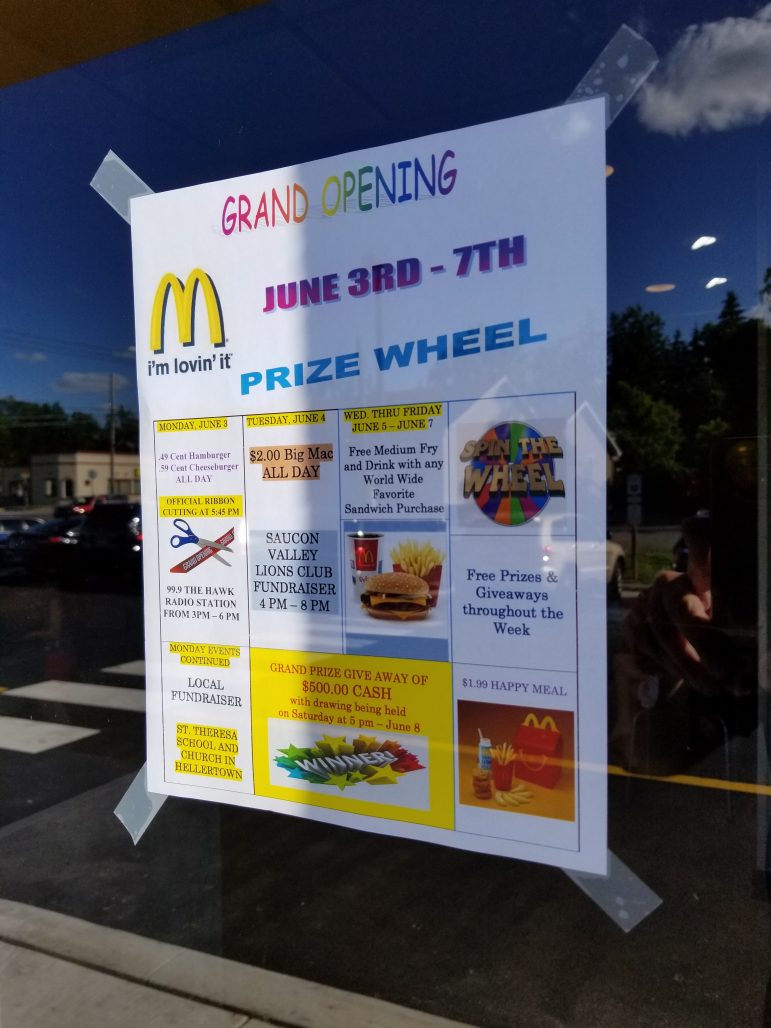 A sign hanging in a window at the Hellertown McDonald’s advertises grand reopening specials. Giveaways and prizes will be offered throughout the week as part of the celebration. 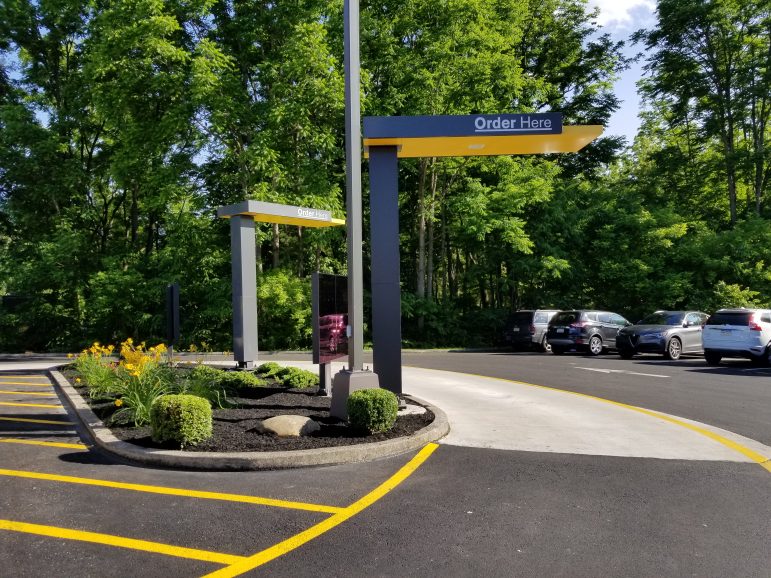 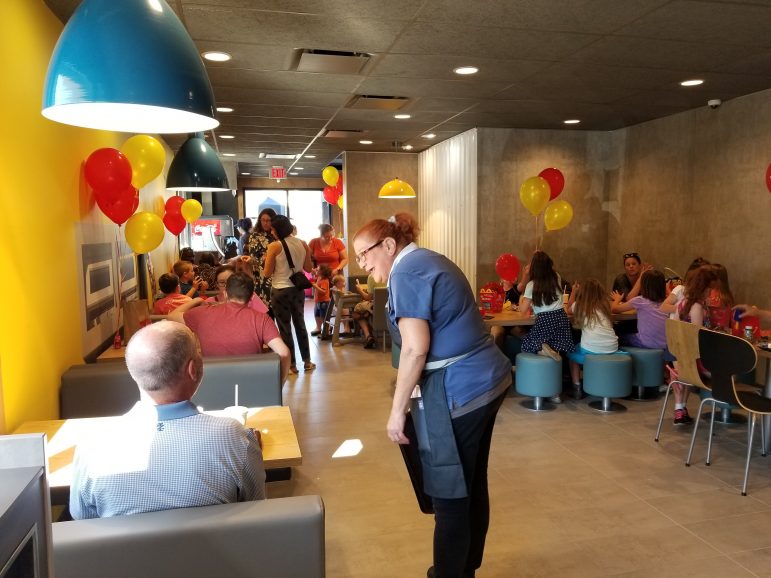 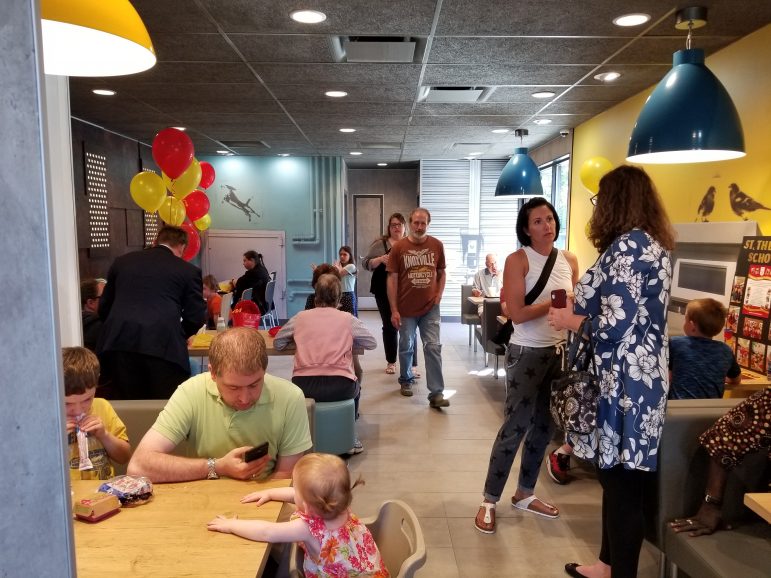 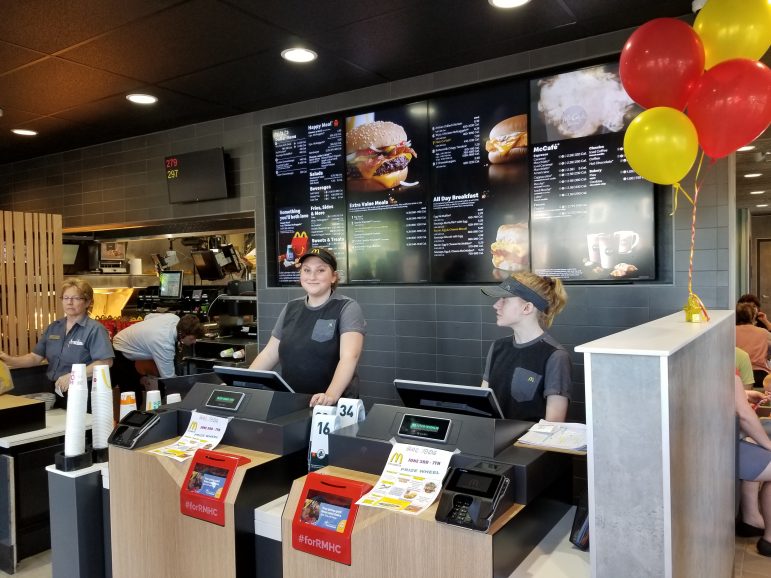 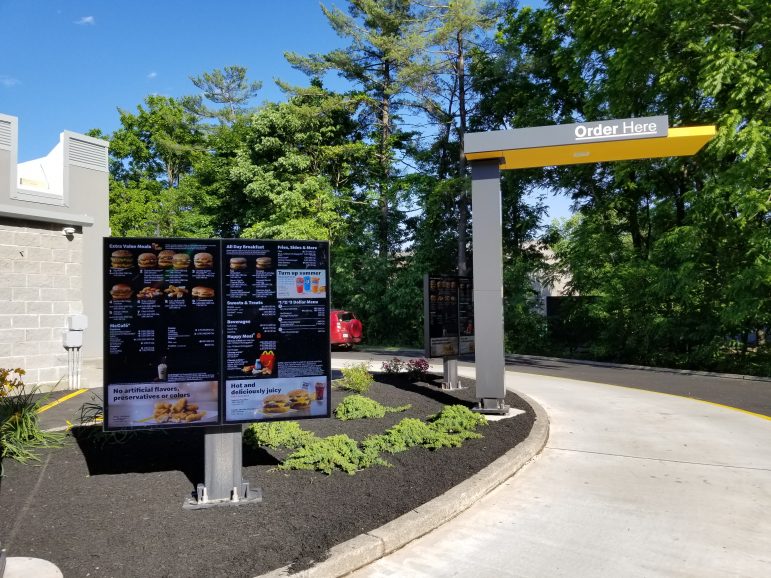 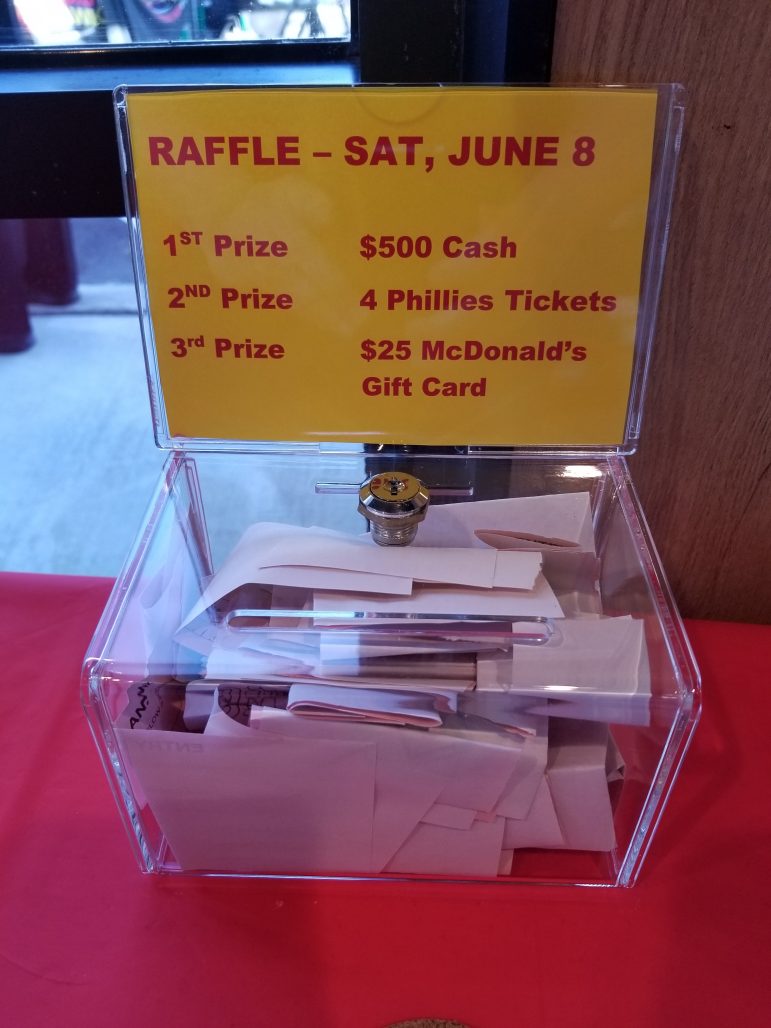 A raffle is being held in celebration of the reopening of the Hellertown McDonald’s.