An 85-year-old bridge in Upper Saucon Township that has been closed since it was damaged by flooding in the summer of 2018 could be replaced as early as next year.

The bad news is that it could take longer to replace it if amicable agreements with neighboring property owners for the right-of-way acquisition aren’t reached.

According to a news release issued Friday by the office of State Rep. Justin Simmons (R-131), in that case “it will take significantly longer” to replace the Mill Road/Blue Church Road bridge “due to the legal process that will have to occur to obtain the property.”

The bridge carries traffic over a tributary of the Saucon Creek, west of Coopersburg.

Lehigh Valley Live reported last August–when the bridge was closed–that it had been carrying an average of 3,615 vehicles per day.

“Please know my office continues to make the reopening of the Blue Church Road Bridge a top priority,” said Simmons. “I am in constant communication with PennDOT officials as this project moves forward.” 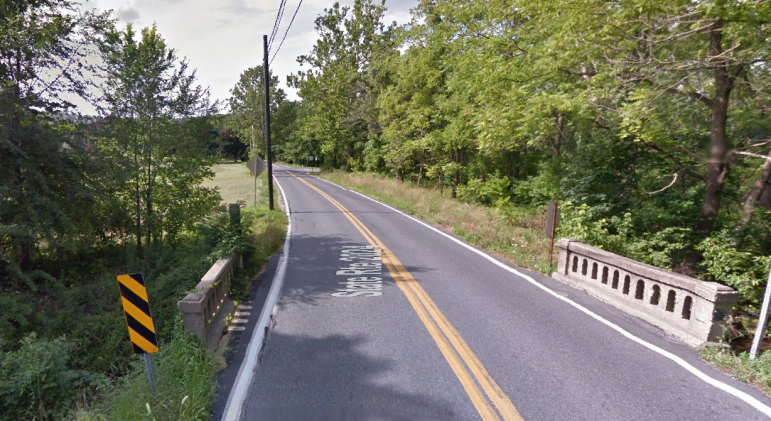 This bridge across a Saucon Creek tributary in Upper Saucon Township has been closed since flooding damaged it last August. There is a plan to replace it with a new span, but that won’t happen til sometime next year at the earliest, accordnig to the office of State Rep. Justin Simmons (R-131).

Simmons’ office cited PennDOT officials in the news release, which stated that the new bridge is currently being designed.

“The design team received the environmental clearances in May, and now will need to acquire property rights-of-way before beginning demolition work on the existing bridge and building a new one,” the news release said.

Assuming that the rights-of-way are acquired without any legal process commencing, the best current estimate for a bridge replacement contract to be placed out for bid is late this year or early in 2020, Simmons’ news release indicated.

Once construction begins, it will be four to six months until the new bridge opens.

In other bridge-related news, Hellertonians are preparing for the closure of the Water Street Bridge in early July.

PennDOT will replace the 81-year-old span over a two-month period.

Traffic will be detoured around the closure while the new bridge is being built.