Already smoke-free, Saucon Valley Middle School will have an updated tobacco/smoking student handbook policy that specifically covers vaping–which has become a growing trend among teens–after school board members voted unanimously to approve it at their meeting Tuesday.

The 2019-2020 student handbook policy prohibits the use and possession of all smoking, tobacco and vape products on school district property 24 hours a day, seven days a week, 52 weeks a year.

Possession of “lookalike” tobacco products and substances is also prohibited under the policy, which specifies that under Act 145 of the Pennsylvania Crimes Code Section 6306.1, students caught violating the policy are subject to receiving a fine of $50 plus costs.

The updated policy is the same as the policy outlined in the 2018-2019 middle school student handbook (found on pp. 27-28 here) except for the addition of the vape-related prohibitions. 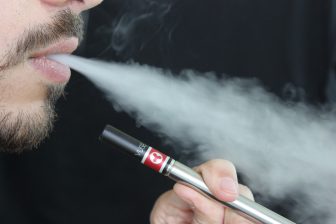 Stock image of a man using a vape pen.

The 2018-2019 high school standbook classifies the possession, use or sale of tobacco as a Level III infraction though it doesn’t specifically reference vape, juul or e-cigarette products (see p. 35). The list is not all-inclusive, the handbook says.

In October 2018, concerns over students vaping in high school bathrooms prompted the school’s administration to temporarily close them, prompting an outcry from some students and parents.

On Tuesday, middle school assistant principal Amy Braxmeier said the provision for issuing fines to students found using or possessing any of the prohibited tobacco or related products is nothing new.

“Typically, we do the ‘in lieu of’ (a fine) if the student will take the…smoking cessation education program, instead of the fine, but that is at our discretion to use that and it’s the same at the high school,” Braxmeier said.

High school students are also subject to being placed in detention, according to their handbook.

Board vice president Dr. Shamim Pakzad asked whether the fine is $50 regardless of whether it is the student’s first offense or a repeat offense.

Braxmeier said the fine schedule is not progressive because “it goes through the township (police department).”

The smoking cessation education program is an eight-week program run through the Caron Foundation, she said.

Braxmeier said she thought there were “nine or 10 students” who were found to have violated the policy last year when Pakzad asked for a figure.

“It ranged from students having possession to actually using it. Typically we would find them in the lockers if a search was done or if we received a tip,” she said. “The problem is there…and we’re working at eliminating it. But it is a problem.”

Braxmeier added that faculty education about juuling and vaping has also been a priority for the middle school’s administration in combating student use of those products. Educational opportunities for both parents and students are also available to families on back-to-shool nights, she said.

A challenge, Braxmeier told the board, is that students in grades five through eight don’t necessarily equate vaping with the well-known dangers of smoking.

“They really do think it’s safe,” she said.

“Cities are banning them now,” said Pakzad in reference to vape products.

School board members Bryan Eichfeld and Tracy Magnotta were absent.

To watch Tuesday’s school board meeting, click here. To view the meeting agenda, click here. The next Saucon Valley School Board meeting will be held Tuesday, July 9 at 7 p.m. in the high school Audion room.