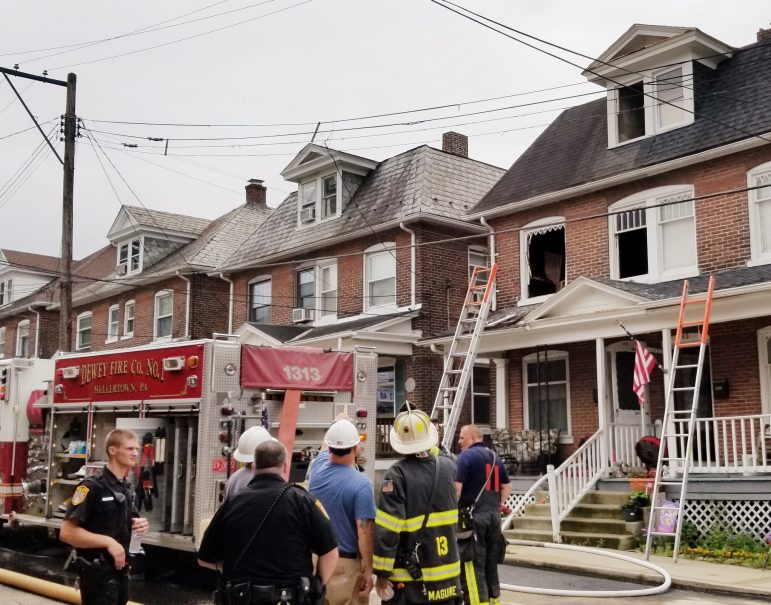 The aftermath of Tuesday’s dwelling fire at 46 W. Saucon Street in Hellertown borough included broken windows, what appeared to be a blackened interior, nearby road closures and dehydrated volunteer firefighters, who were given bottled water to drink after battling the blaze in heavy protective gear on one of the most humid days of the year.

Updates: Janice Repnyek, owner of Mike’s Kids’ Doggie Shop at 501 Main Street in Hellertown, is collecting donations for former school crossing guard Ada Krug, 70, whose house was damaged in the fire. Donations of gift cards, checks, clothing and other items can be dropped off at the doggie shop til 5 p.m. Friday, from 6 a.m. to 4 p.m. Saturday and from 6 a.m. to noon Sunday.

Local volunteer firefighters had to perform double duty Thursday morning as they battled a house fire at 46 W. Saucon Street in Hellertown borough in hot, humid weather conditions that can quickly lead to heat exhaustion among first responders.

Fortunately, no one was reported injured in or as a result of the fire, which broke out a little before 11:30 a.m. in a twin home in the middle of the block. 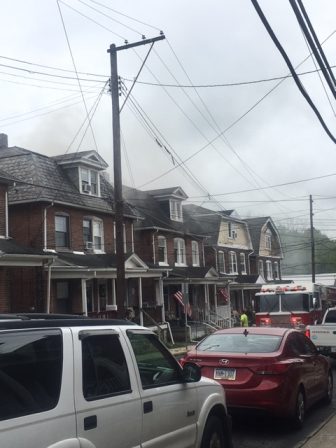 Firefighters used ladders to access the home’s second story, where they smashed windows above the front porch, allowing smoke to escape.

By noon the fire was under control and the street in front of the home was being cleaned up by Hellertown public works employees, who used sand to soak up hydraulic fluid that leaked from a burst line on one of Dewey Fire Company’s engines during firefighting operations.

Homeowner Ada Krug was comforted by neighbors and given bottled water on a front porch across the street after escaping the blaze.

Firefighters, too, rehydrated with bottled water and placed cold wet rags on their foreheads in order to cool off as the heat index hovered around 90 degrees. 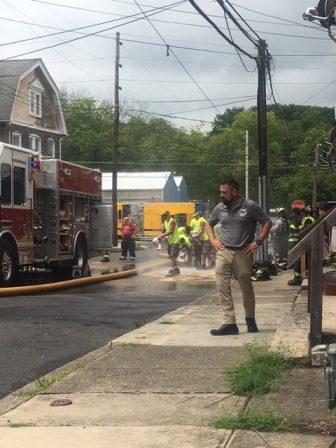 Hellertown Public Works employees use sand to soak up hydraulic fluid that leaked onto the street from a burst line on a Dewey fire engine. Pictured in the foreground is Hellertown zoning and codes enforcement officer Kris Russo.

An ambulance was on scene, at the ready in case anyone suffered a heat-related illness.

Initial reports from bystanders and neighbors were that the fire may have begun in a dryer in the basement of the three-story brick home, however an investigation by fire officials determined that it was caused by an extension cord that was powering an air conditioner.

As a result of the fire department activity up and down the street, W. Saucon Street was closed between Main and Front streets.

The intersection of Front and W. Saucon streets was also closed to traffic, with motorists detoured around the closure onto Harris Street. 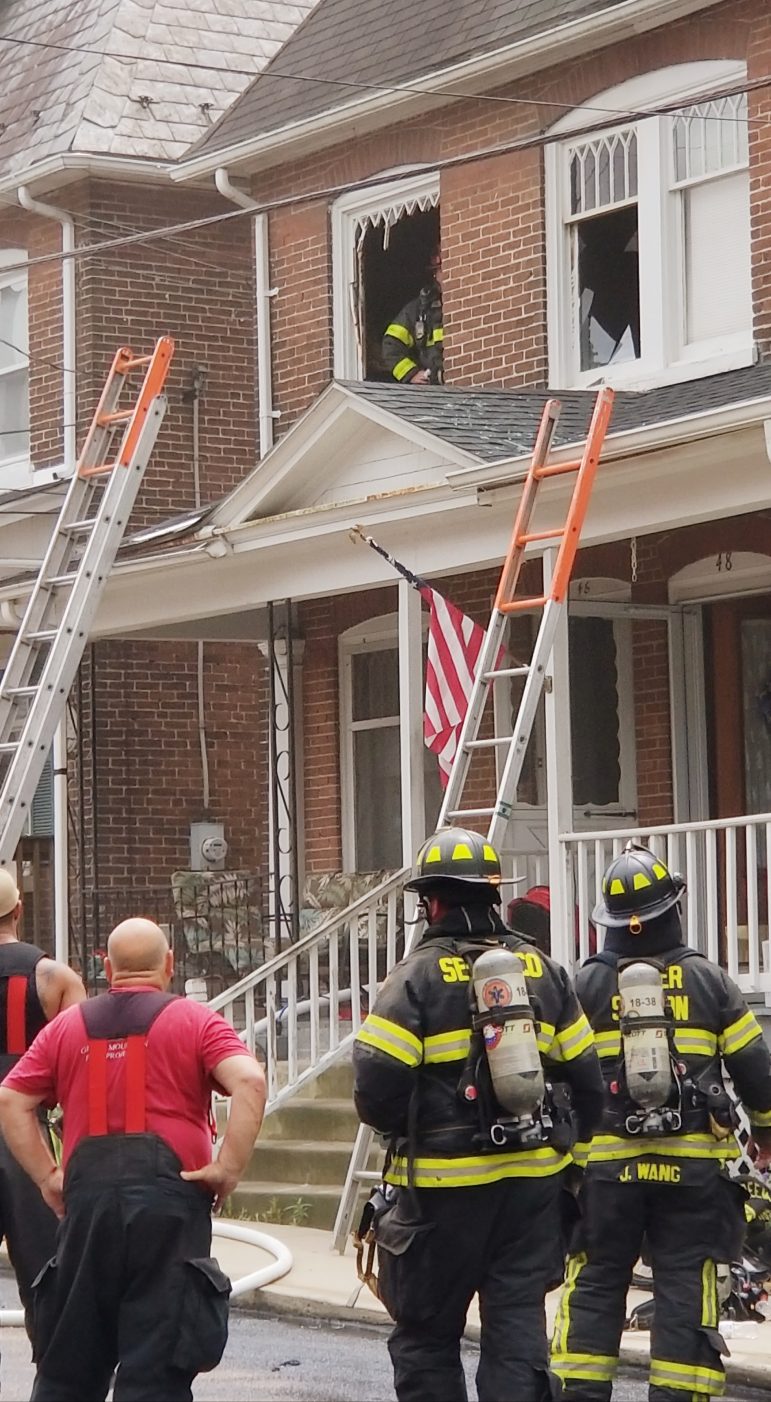 Windows on the second story of the home were smashed to help ventilate the smoke from inside. 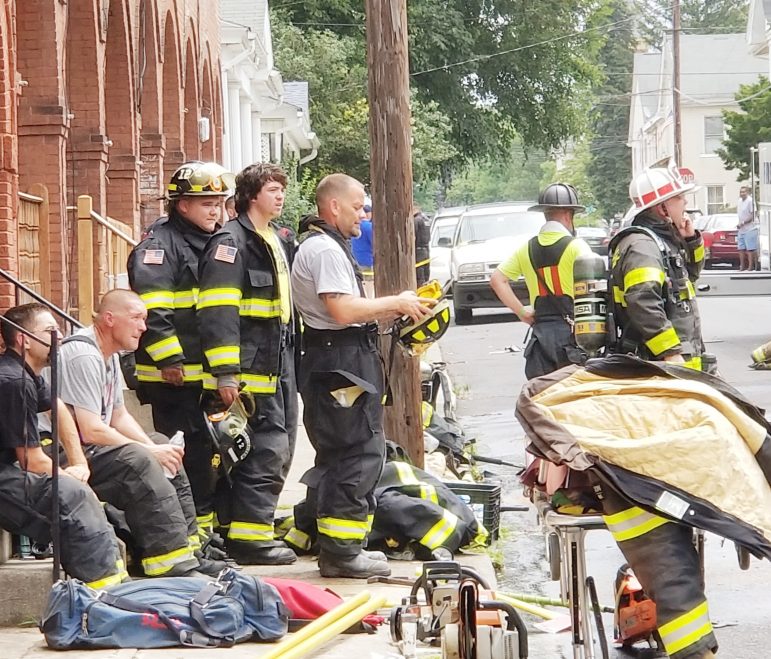 The aftermath of Tuesday’s dwelling fire at 46 W. Saucon Street in Hellertown borough included broken windows, road closures and dehydrated volunteer firefighters, who were given bottled water at the scene after laboring in heavy gear on one of the most humid days of the year. 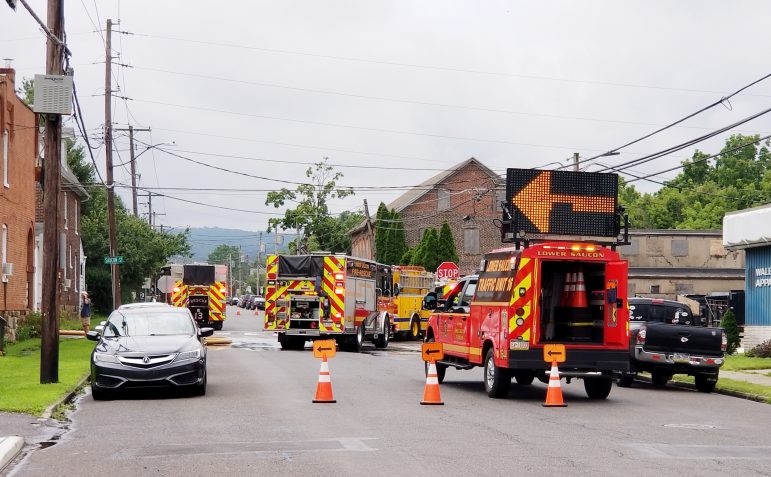 Front Street at W. Saucon Street in Hellertown was closed because of the fire and police activity. 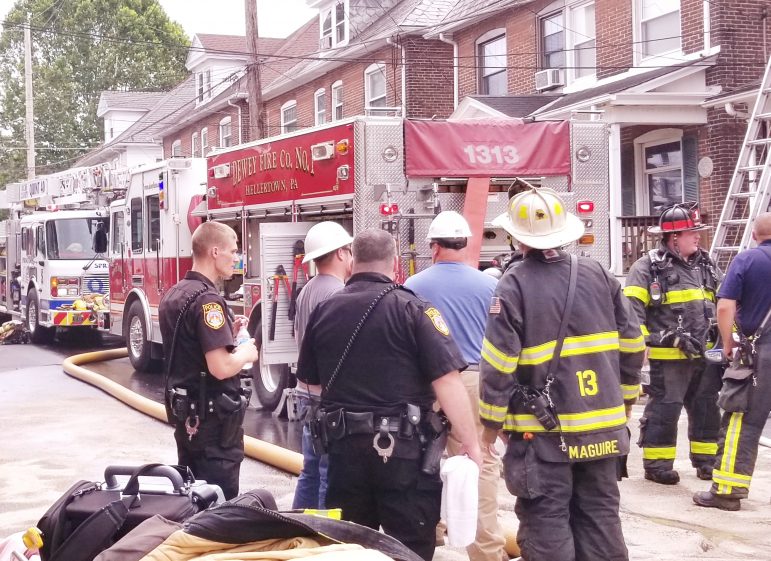 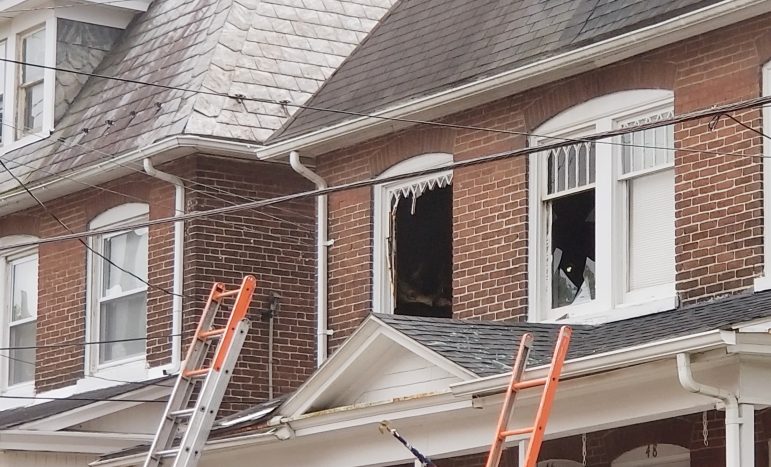 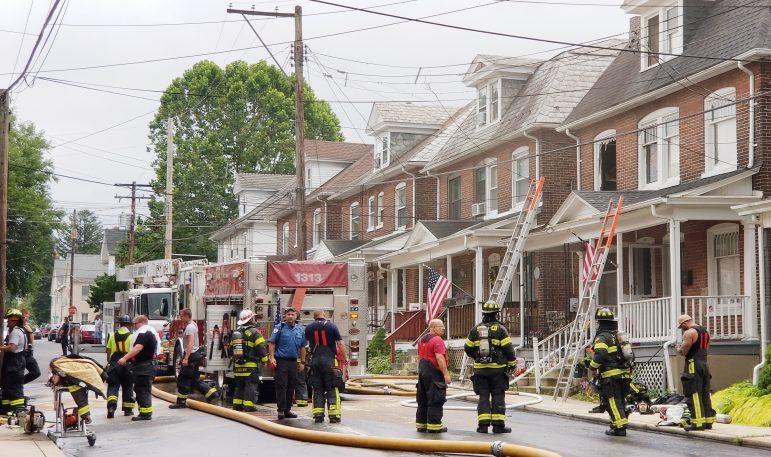