Driving down Main Street in Hellertown last week you may have noticed some striking new signs on the building that formerly housed the adjoining restaurants Bella’s Ristorante and Cafe Erica.

The signs represent a change in ownership but not a lot else as far as the core business model is concerned, according to the new owner. 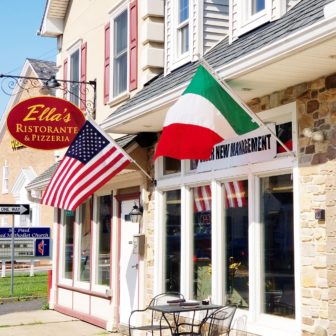 Ella’s Ristorante & Pizzeria is located in the heart of downtown Hellertown, at 637-639 Main Street.

Earlier this summer, the restaurants at 637-639 Main Street were sold by Susan and Vincent Cavataio to fellow restaurateur and friend Mike Zavaleta, who has renamed them Ella’s Ristorante & Pizzeria in honor of two of his granddaughters, Gabriella and Isabella.

He got his start in it in 1995, working in an Italian restaurant in Dublin, Bucks County, where he eventually became the head cook; a position he held for a decade.

Zavaleta, who lives in Quakertown and is originally from Mexico, said he learned much about Italian cooking and running an eatery when he managed that restaurant’s kitchen, as well as in subsequent years as the owner of two successful Mexican restaurants nearby.

In spite of the success he’s had with opening Mexican eateries, or perhaps because of it, Zavaleta said he had a yearning to get back to the Italian cuisine he started out in.

He had worked for the Cavataios early on, so when Bella’s was put up for sale, he said he felt it was a great opportunity to get back to doing something he is passionate about: serving delicious Italian food.

Unlike some new restaurant owners, Zavaleta said he’s not rushing to change things in his new establishment, which attracted a loyal customer base during the eight years it was Bella’s and Cafe Erica.

The same staff and menu are in place at Ella’s as at Bella’s, so other than the new signs and some modest interior updates which needed to be made–for example, new carpeting was recently installed–visitors to the restaurant are unlikely to notice many changes.

The menu at Ella’s is still filled with classic Italian dishes such as Shrimp Scampi, Veal Scallopini and Eggplant Parmigiana, and it also still includes some twists on Italian favorites that the Cavataios introduced, such as their Balsamic Calamari appetizer.

The expansive menu also includes artisan pizza, hoagies, steak sandwiches, salads, soups, calzone, stromboli and now lunch-sized portions of the restaurant’s dinner entrees, all of which are available for takeout or delivery.

Customers can also order online from their phones using the free GrubHub and Slice apps.

A small change Zavaleta said he’s made is for the littlest customers, who now can eat their fill of free pasta at Ella’s, Tuesday through Thursday (meatballs and other additions are extra), and he plans to add to the lunch menu by offering burgers and more specials. (A current summer sandwich special is advertised on the restaurant’s Facebook page, along with a pizza special.)

In the fall he said he plans to introduce breakfast at Ella’s, possibly every day, and there are some other exciting additions he is contemplating that won’t take anything away from what has already proven to be a successful restaurant formula.

Zavaleta said he is excited to be part of the expanding Main Street restaurant scene in Hellertown, and to put roots down as a business owner in the Saucon Valley.

He is also motivated to succeed by his family, which includes six children, one of whom was born with the condition spina bifida. His son overcame many challenges to graduate from Quakertown Area High School and holds down a job at a local retailer, he said.

Ella’s is BYOB, and is open for lunch and dinner every day except Monday.

Seasonal outdoor dining is available on a patio at the rear of the restaurant, and Zavaleta said he hopes to possibly host live acoustic performers there in the future.

He is also planning to hold a ribbon-cutting ceremony at the restaurant in recognition of the change in ownership with the Hellertown-Lower Saucon Chamber of Commerce.

There is also a new website for the restaurant: EllasRistorante.com, where visitors can find information about current specials, catering and order online.

Reservations may be placed by calling 610-748-1020. The number for takeout and delivery orders is 610-748-1500. Major credit cards are accepted and off-street parking is available in the lot behind the restaurant.

Note: Saucon Source LLC provides social media management services to Ella’s Ristorante, as it did to Bella’s Ristorante and Cafe Erica from 2014 to 2019.