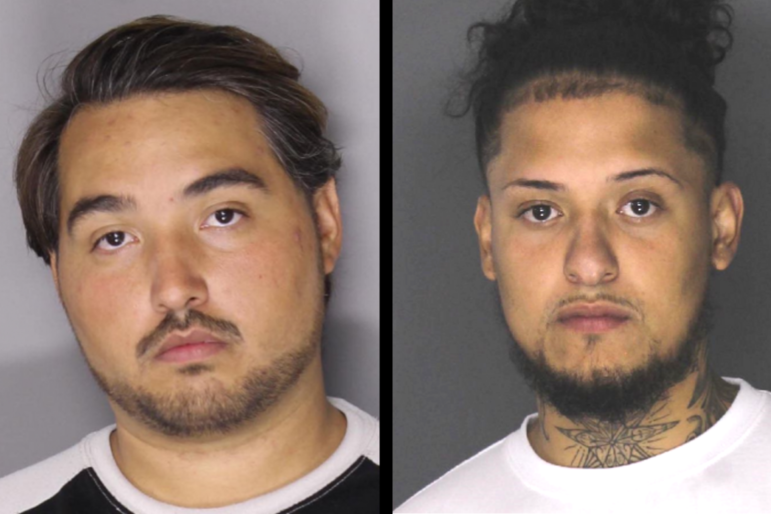 A Bethlehem man’s attempt to retrieve a gun he said he lost in a friend’s car backfired badly when police say they allegedly discovered that the man’s license to carry a firearm had expired in June.

In a post on their Crimewatch site Monday, Lower Saucon Township Police said Ricardo Junior Ruiz, 26, came to township police headquarters Sunday to retrieve a firearm he said fell out of his pocket when he exited the vehicle of a friend, Luis Javier Leon, 23, of Bethlehem.

Leon was arrested earlier Sunday after police stopped him for allegedly failing to maintain a single lane of travel on Seidersville Road, police said in another Crimewatch post.

At that time police say an officer allegedly detected the odor of marijuana coming from Leon’s vehicle and received consent to search it, finding the loaded handgun under the passenger seat.

Leon was then arrested on charges of carrying a firearm without a license (Felony 3) and carrying a prohibited firearm (Felony 2), and committed to Northampton County Prison in lieu of $25,000 straight bail, police said.

When Ruiz came to the police station, authorities say he told them he’d received a call from friends telling him that his gun was in a car that had been stopped by police.

“Mr. Ruiz was interviewed and provided a written statement to police that the firearm was his, and that he was a passenger in the vehicle and the firearm fell out of his pocket when he exited the vehicle earlier,” police said. “Police then checked Mr. Ruiz’s license to carry a firearm and learned that it expired June 12, 2019.”

At that point police said Ruiz was arrested on a Felony 3 charge of carrying a firearm without a license and committed to Northampton County Prison in lieu of $15,000 straight bail.

Both Ruiz and Leon are scheduled to have preliminary hearings before District Judge Alan Mege at Northampton County District Court 03-2-04 on Oct. 18 at 9 a.m., according to online court records.