The Saucon Valley Panthers traveled to Northwestern Lehigh to take on the Tigers on what was a nice mild fall Sunday. We have been very lucky with the weather for the games this year, and this was no exception. Sunny to partly cloudy skies with temperatures in the low to mid 60s created a perfect day for football.

The Rookie Flag team has been playing very well lately and took the field first in this week’s action. The format this week was six-on-six with each team possessing the ball on offense for a quarter before switching to defense for the second quarter and then reversing the order after halftime. The Panthers started with the ball on offense and rattled off three straight 40-yard touchdown runs, then added a fourth just before their quarter ended. The defense was rallying to the ball in this game, and stopped the Tigers on several plays on their possession. After halftime, the Tigers got to start with the ball, and again the defense was able to stop them more often than not throughout the third quarter. The final quarter saw the Panthers take over the ball, and add on another pair of touchdowns. The defense was sparked by #14 Bryce Johnston’s 5 “tackles” 1 for loss  performance and also by #11 Ezekiel Hallman’s 3 tackles 1 for loss effort, while the scoring was led by #2 Caius Wagner who had two touchdowns and 28 yards rushing, and #18 Benjamin Gangi with 65 yards rushing and a score. #28 Jerry Thomas, #3 Hudson Gonzales and #14 Bryce Johnston all contributed 40 yards rushing and a score each in the contest. 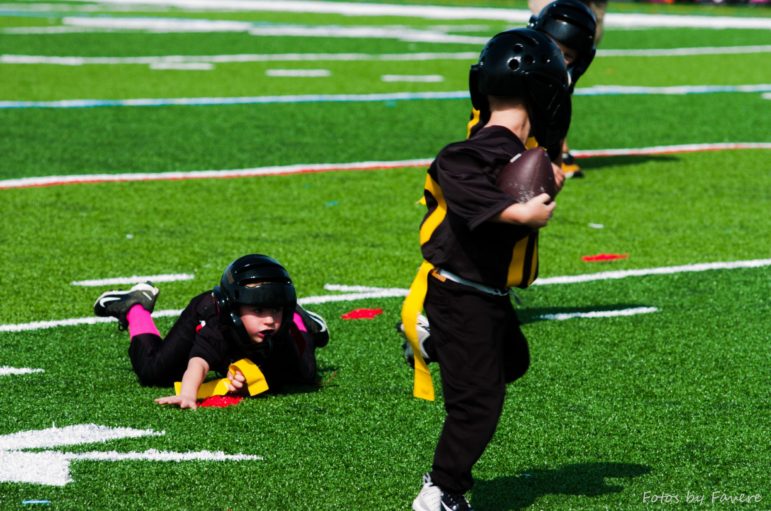 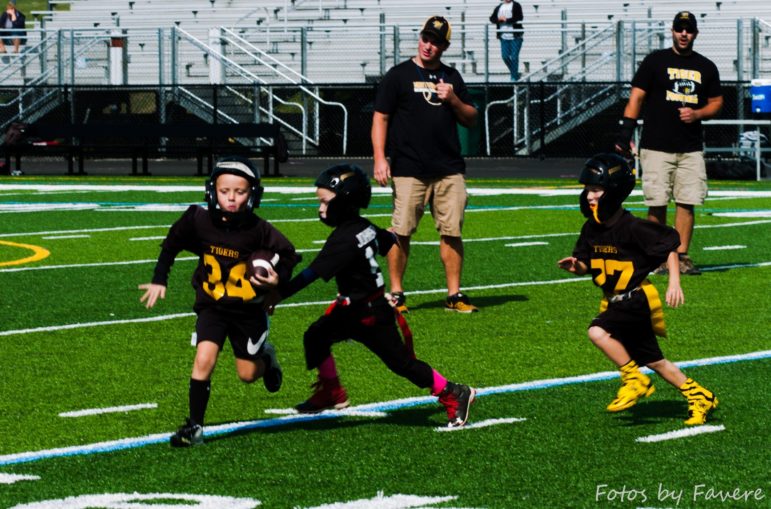 #14 Bryce Johnston gets a stop for loss on this play. 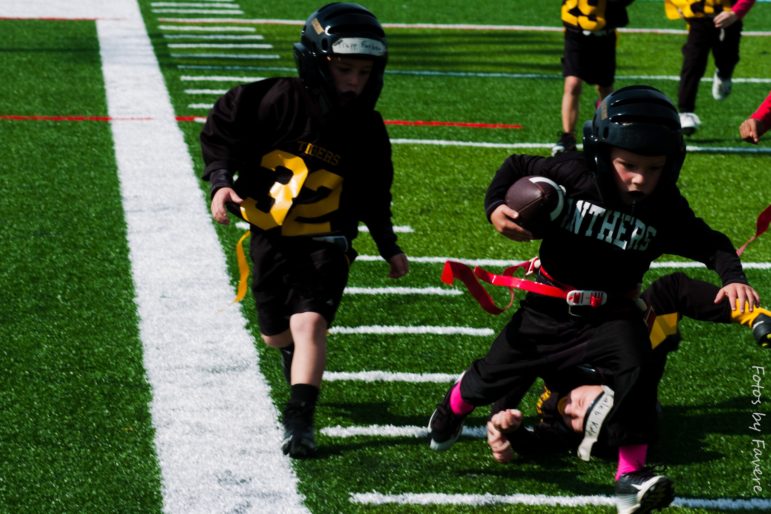 #11 Ezekiel Hallman hurdles a defender as he stays in bounds on a 32-yard run.

The Competitive Flag Panthers were next on tap in the slate of games. They came into the game off the high of winning their first game of the season the week before and hoped to continue that positive momentum as they faced off against one of the top teams in the division–the Tigers, who owned a 6-1 record on the season as of game day. Saucon started with the football and ripped off a nice run on the first play, but a penalty knocked them back 15 yards and stalled out the drive. The Tigers took over the ball and in five plays found the end zone. The Panthers tried to claw their way back into the game through the air, but ended up throwing an interception. Trailing 18-0 at halftime the Panthers tried to make some adjustments but were kept far enough out of reach until #24 Gavin Sweirkowski scored a long touchdown on a QB keeper, but it was not enough to overcome the deficit and the Panthers came up short with a 24-6 final score. The defensive effort was paced by #26 Luke Peters’ 3 stops 1 for loss and #30 Matteo Lazaro’s 3 stops. Offensively the Panthers saw a solid ground game from quarterback Gavin Swierkowski who had 97 yards and a score on 5 carries while #26 Luke Peters contributed 17 yards on 3 carries and #33 Hudson Mertz ran for 14 on 2 carries. In speaking with the coaches they all said that Northwestern from their varsity team down through the rookies were all hard-working, very well-coached and would be a tough test. 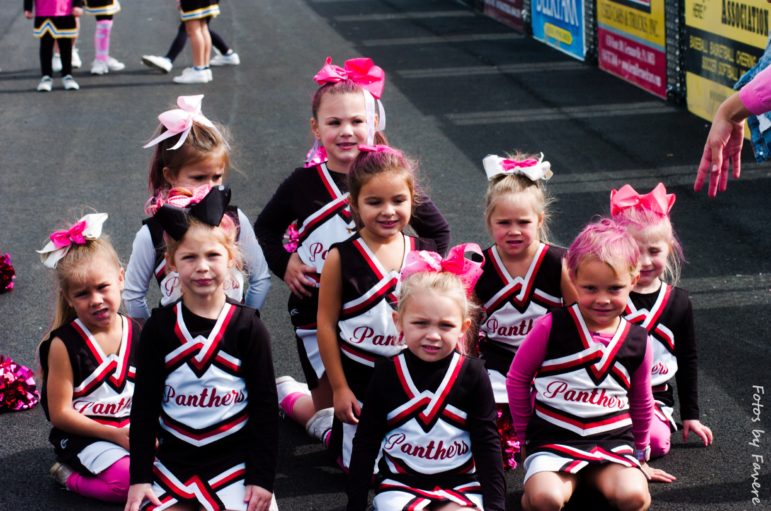 Showing off the pink hair accents as part of Breast Cancer Awareness Month. 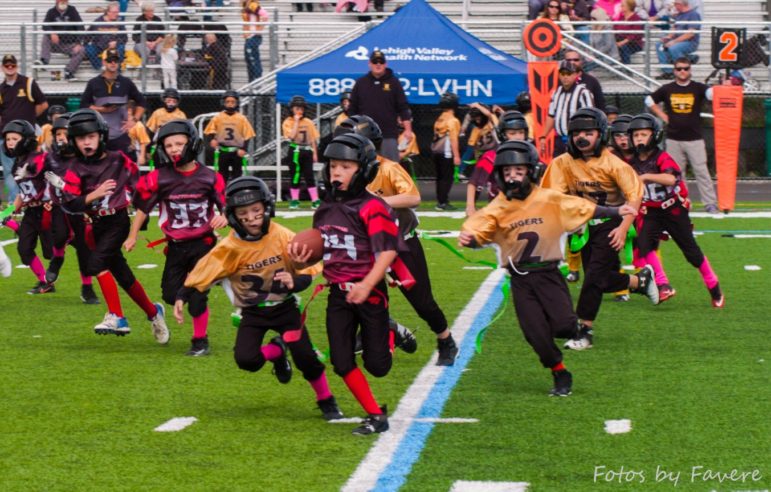 #24 Gavin Swierkowski takes off towards the sideline for a huge gain in the first quarter. 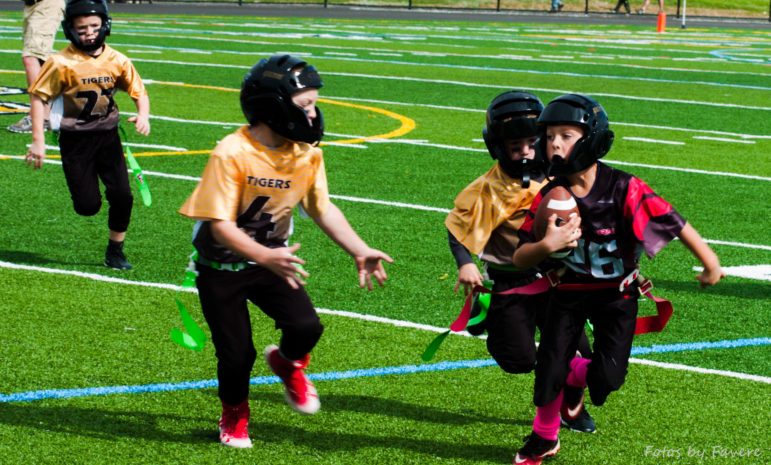 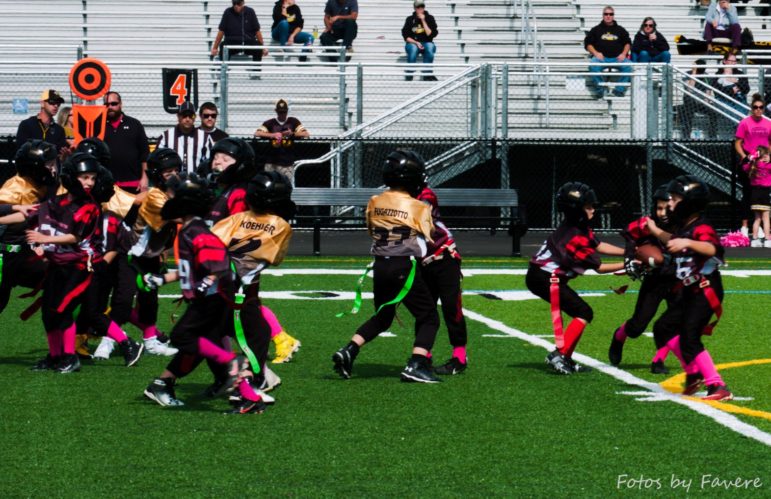 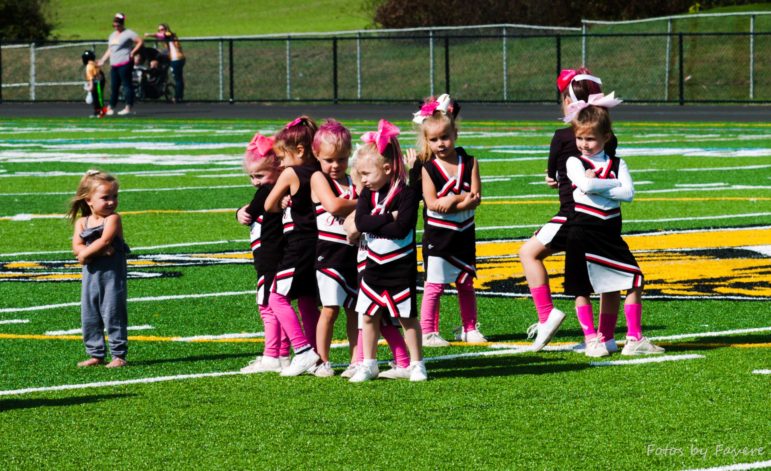 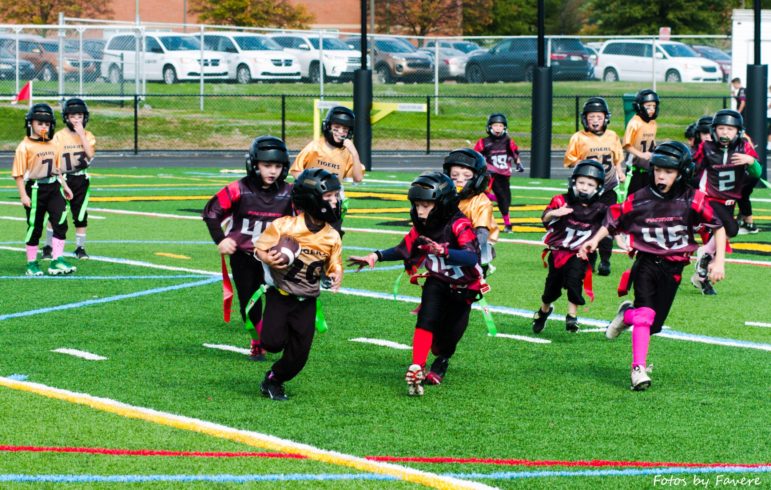 Next up in the battle of the big cats came the Junior Varsity squads. The Panther coaching staff again iterated that the opponent, the top team in the division, was undefeated because they were well-coached and physical, and that it would be a tough game. Saucon again started with the ball, but after three downs ended up having to punt. The Tigers went to work on their next drive and scored quickly, taking a 6-0 lead. The Panthers sustained a drive on the next possession, but after nine plays turned the ball over on downs when the Tigers took the ball and pounced on the opportunity to extend the lead. A pair of penalties helped derail the following Panther possession, while the Tigers scored again to take an 18-0 lead into halftime. Starting the third quarter with the ball, the host team scored another touchdown, extending the lead to 24-0, and that would be all they would need. Their visibly well-coached defense clogged the running lanes and frustrated the Panther offense all game, shutting them down in the second half. Offensively #20 Grayson Schmell led the rushing attack, posting 37 yards on 14 carries, with #3 Taylor Rohn pitching in 9 yards on 4 carries. The defense had some standout performances by Rohn, who notched six tackles and a sack, #4 Jaylen Caballero who had 5 tackles 1 for loss and #16 Zachary Henn who had 4 tackles 2 for loss and a sack. This team now sits at 3-5, and in a tie for seventh place in the division, but is still in the playoff hunt owing to a tiebreaker over the team above them and another team tied with them in the standings. 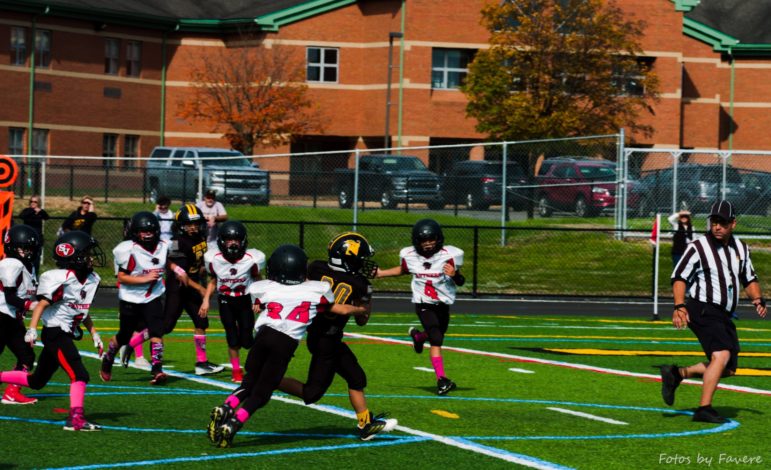 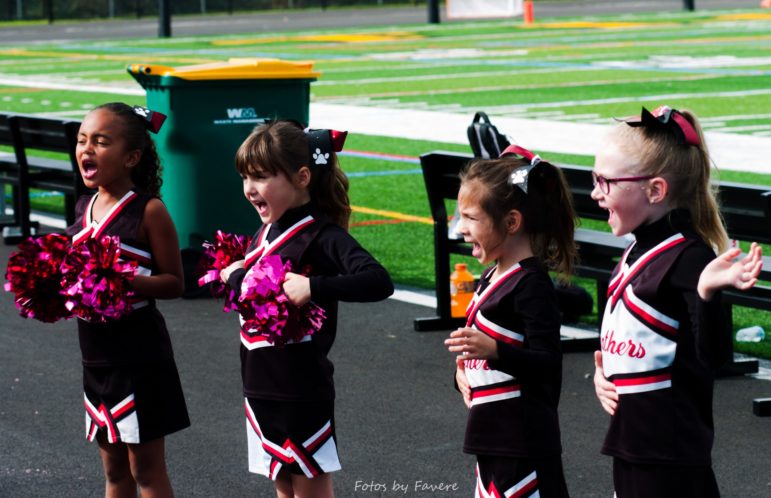 The JV cheer squad still brought a lot of spirit with them. 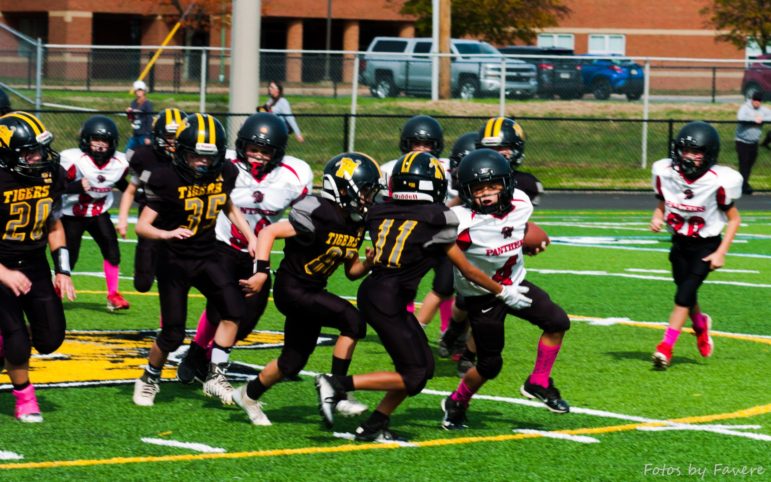 #4 Jaylen Caballero runs hard as he fights off a pair of Tiger defenders. 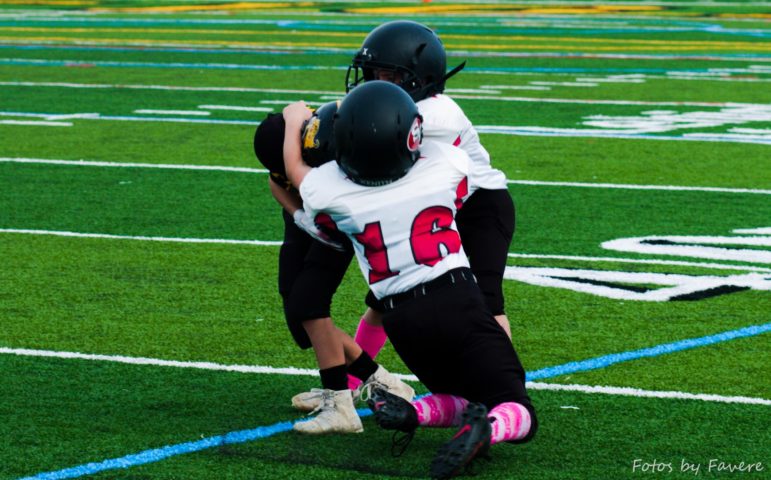 #16 Zachary Henn and #3 Taylor Rohn wrestle down a Tiger runner. 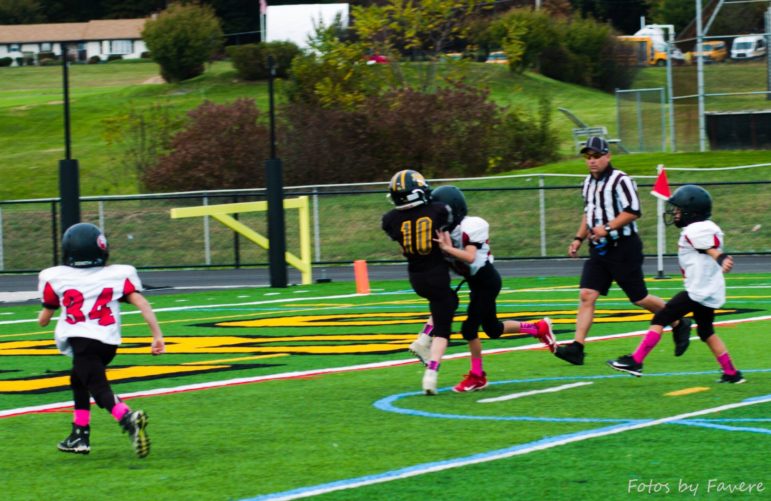 #20 Grayson Schmell delivers a huge hit from his safety position on this Tiger receiver. 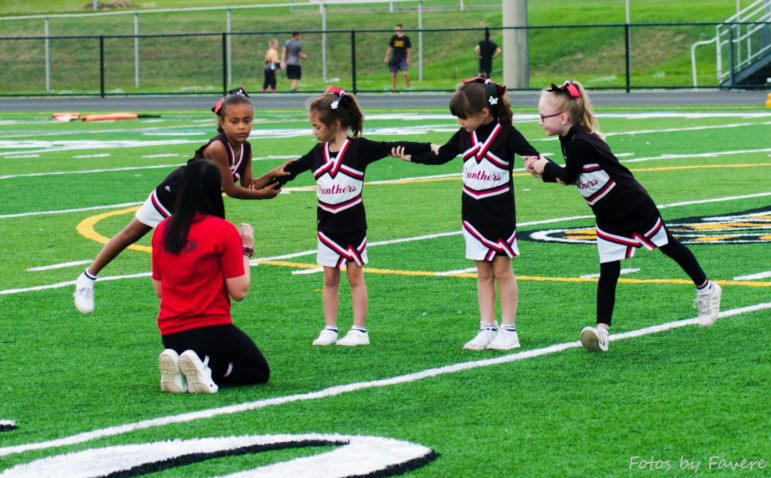 The final game of the day featured a rematch where these two teams went undefeated and met in the league championship with Saucon winning a hard-fought game for the trophy. The Tigers at 6-1 this season were looking to get even, and the coaches knew it would be another hard-fought game. The Panthers got the ball to start the game but after a few nice runs, the drive stagnated, and they were forced to punt. Saucon’s defense limited the Tiger offense on the next drive and forced them to punt as well. The Panthers got the ball again and grabbed the lead courtesy of a 54-yard touchdown run by #36 Jackson Albert, which allowed Saucon to take an 8-0 lead into the quarter break. The Tigers answered with a touchdown of their own on the next possession, then pounced on a fumble recovery, converting that into points quickly too. The Panthers stalled out their next drive, punted and sent out the defense again. The Tigers launched an eight-play drive that chewed up most of the remaining time in the second and concluded that with a touchdown as well, and took a 20-8 lead into the intermission. The third quarter began with the Tigers receiving the kickoff but two plays into that drive Jackson Albert recovered a fumble and ran it in for a touchdown, giving the Panthers some much-needed momentum and a great opportunity to stay in the game. The Tigers had other plans and tacked on two more scores in the third quarter. With time starting to dwindle, the Panthers went to work on offense and scored a touchdown on a very nice pass from #10 Peter Albano–to you guessed it–Jackson Albert. The next Tiger possession saw them fumble away the ball again and gave the Panthers hope for a comeback, but a questionable call led to Jackson fumbling the ball versus being down, and ended the comeback attempt. The offense was led by workhorse running back #36 Jackson Albert who amassed 192 total yards; 129 rushing on 15 carries and 63 receiving on two catches. #10 Peter Albano completed all three of his passes for 65 yards. The defense got strong play from #18 Hector Mateo leading the team with eight tackles, #25 Anthony Maholland with six tackles and #36 Jackson Albert who chipped in five tackles along with his scoop-and-score fumble recovery touchdown. The Panthers never gave up, playing hard until the end, but came out on the short end of a 32-22 scoreboard. They now sit in a tie for fourth place but somehow are seeded behind a team they beat head-to-head. 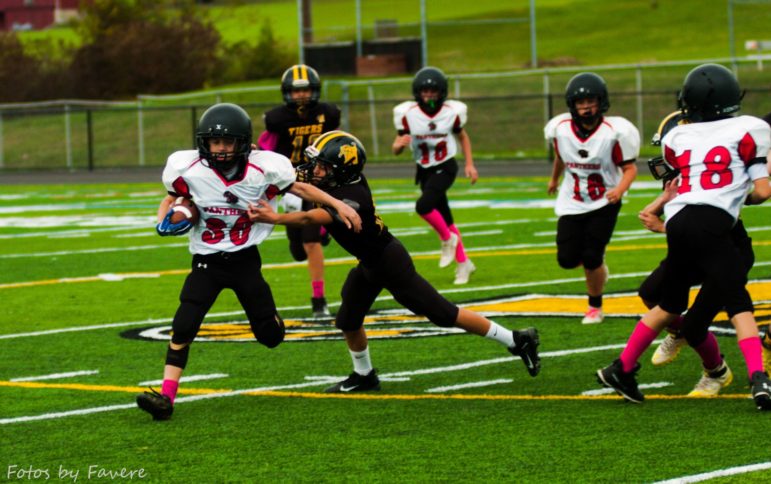 #36 Jackson Albert sheds a tackle in the first quarter. 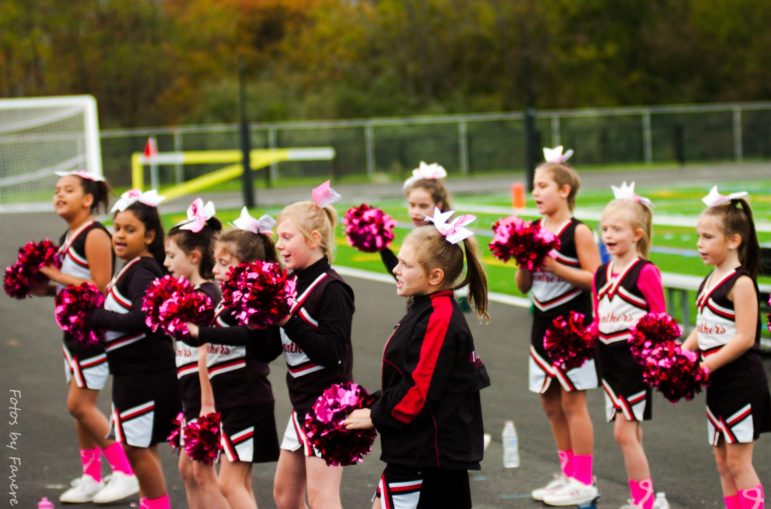 The varsity cheer squad rallies the boys to an early lead. 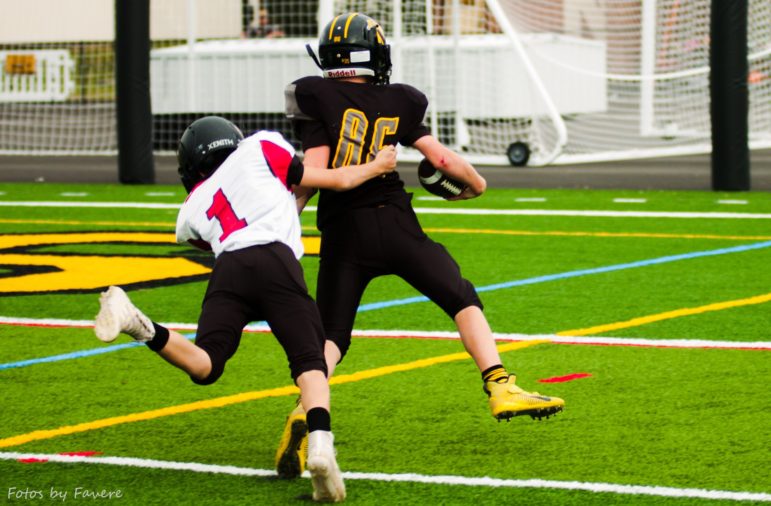 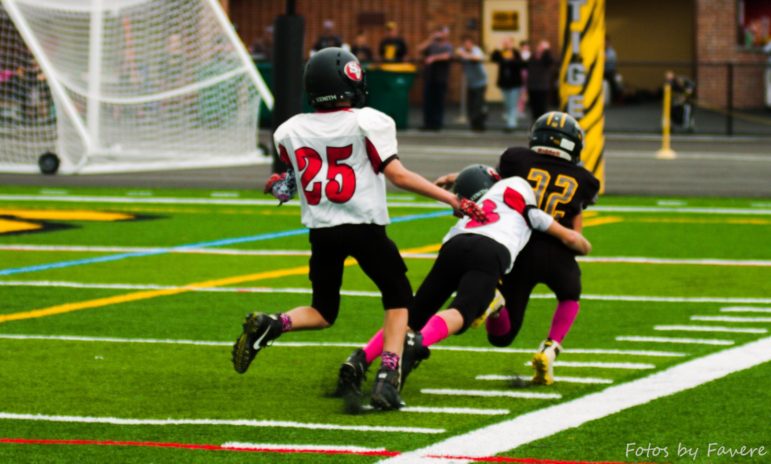 #18 Hector Mateo crushes a Tiger running back out of bounds as #25 Anthony Maholland gives pursuit. 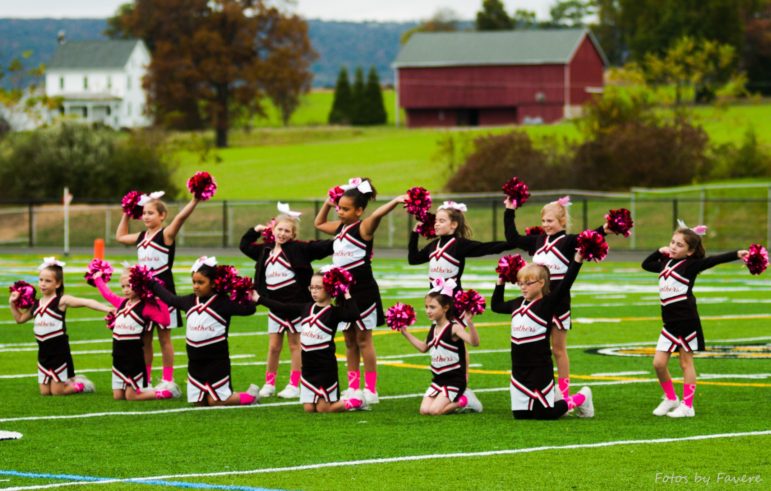 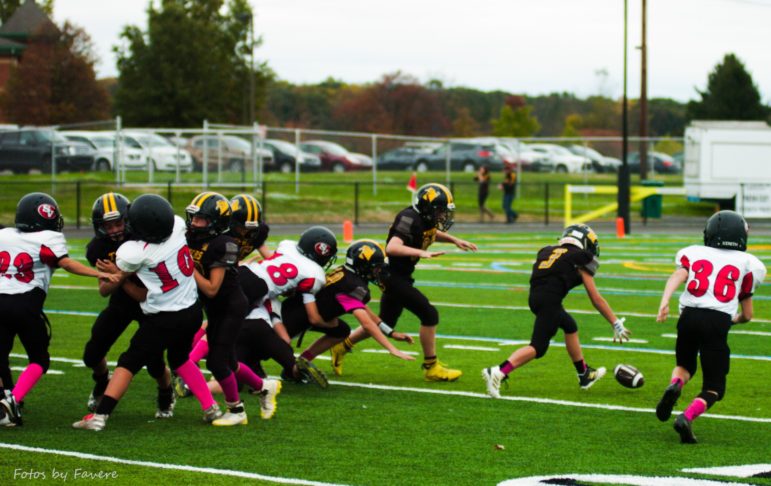 #18 Hector Mateo gets to the QB, causing a fumble, while #36 Jackson Albert eyes the ball for a scoop-and-score.

This week the Notre Dame Crusaders come to town for a day of games starting at 10 a.m. in Dimmick Park. Please come out and show your support for the home team Panthers.