While the teams headed into Week 9 focused on football, we as fans have certainly appreciated the 9 game streak of nice weather (which sadly appears to be coming to an end). Sunny, mild weather on Oct. 19 made for yet another great day for Panther football.

The Rookie Flag team has been through more format changes this year than the previous season, but continues to show growth and learning, especially on the defensive side of the ball. They have been hustling all over the field and pulling flags left and right, often in large groups ,which has been stifling opposing running attacks the last two or three games. Spurred on by #8 Brody Weiss’ team-leading six stops, #18 Benjamin Gangi’s three stops and #2 Caius Wagner’s two stops, the defense left the visiting Notre Dame Crusaders with very little room to run the ball. #14 Bryce Johnston had an outstanding day running the football, producing 90 yards and three scores on four carries. Other offensive contributors included #18 Benjamin Gangi and #28 Jerry Thomas, who pitched in 40 yards and a score each, while #2 Caius Wagner had the other touchdown from 27 yards. They are looking forward to the Week 10 matchup with the Pirates on Sunday. 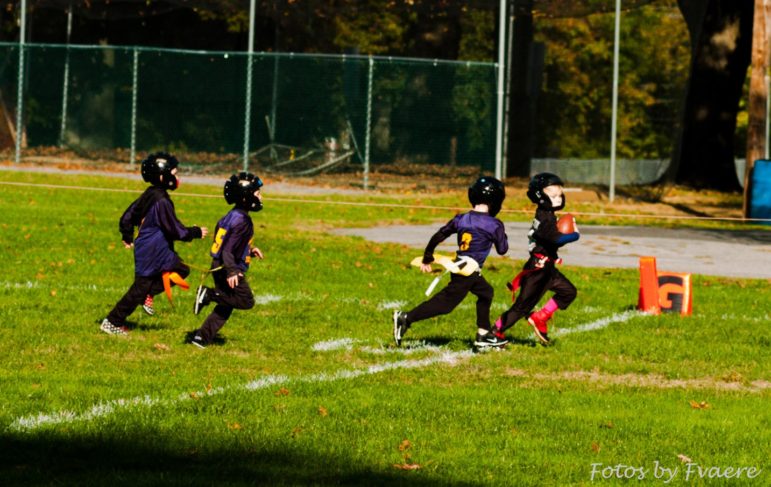 #14 Bryce Johnston breaks the plane for a Panther touchdown his first of three on the day. 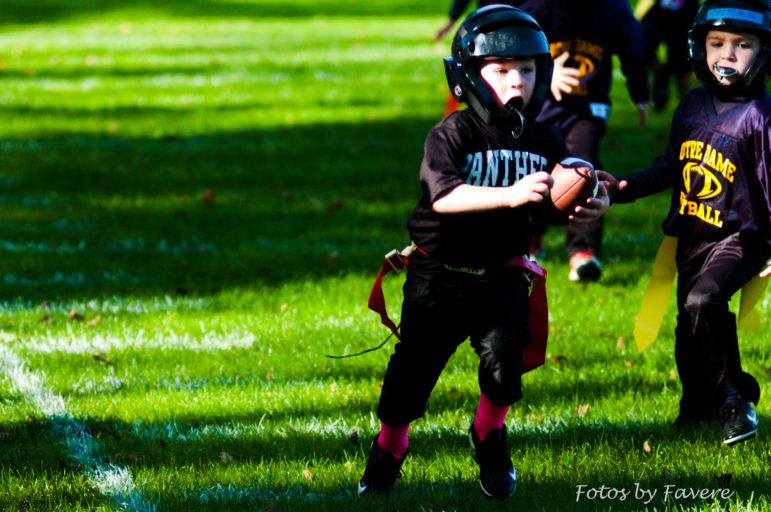 #18 Benjamin Gangi scampers along the sideline for a score. 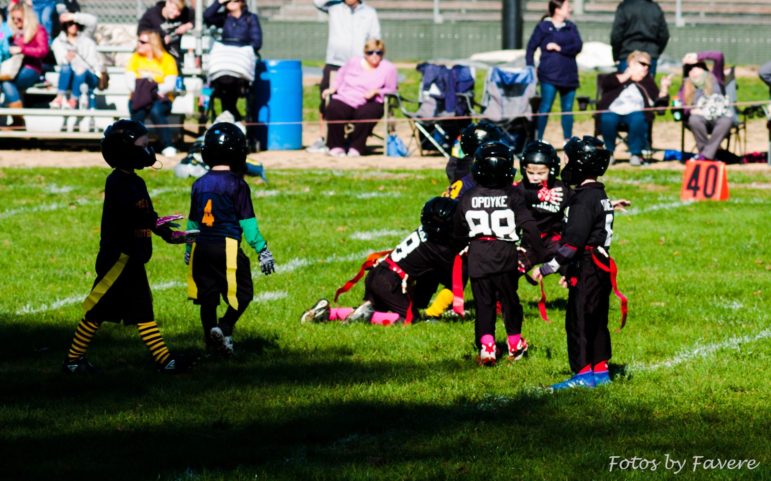 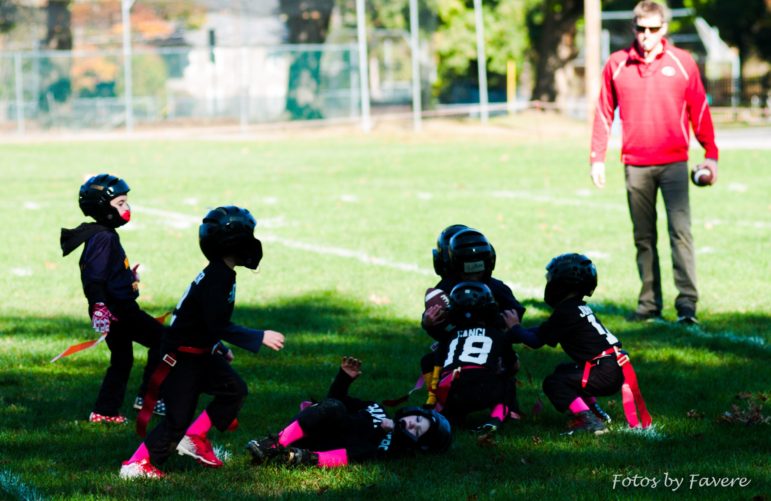 The ball-hawking Saucon defense leaves them with nowhere to run.

The Competitive Flag division came out next and played a very good game. Starting off with the ball in their possession, the Panther offense went to work and wasted little time marching down the field courtesy of a few big plays capped off by a 3-yard touchdown run by #24 Gavin Swierkowski. With that, the Panthers grabbed an early lead. The defense forced the Crusaders to a 3 and out, but the offense turned the ball back over to the Crusaders on downs shortly after that. Notre Dame scored in three plays on their next drive, but the Panthers answered with a quick strike touchdown of their own, again courtesy of #24 Gavin Swierkowski, right before halftime to maintain a 7 point, 13-6 lead. After the intermission it was all Panthers, as they added to their lead and shut down the visitors’ offense. The solid defense was a team effort but led by #30 Matteo Lazaro and his three stops with 2 for loss, while #12 Jayden Reifinger and #26 Luke Peters added two stops each. The Panther offense saw a pair of standout runners: QB #24 Gavin Swierkowski had 61 yards and a pair of scores on two carries, and went two of two passing for 7 yards, plus #30 Matteo Lazaro had three carries for 62 yards and a touchdown. The Panthers went on to win this game–their second in their last three games–by a final score of 27-6, proving that they are starting to put it all together. 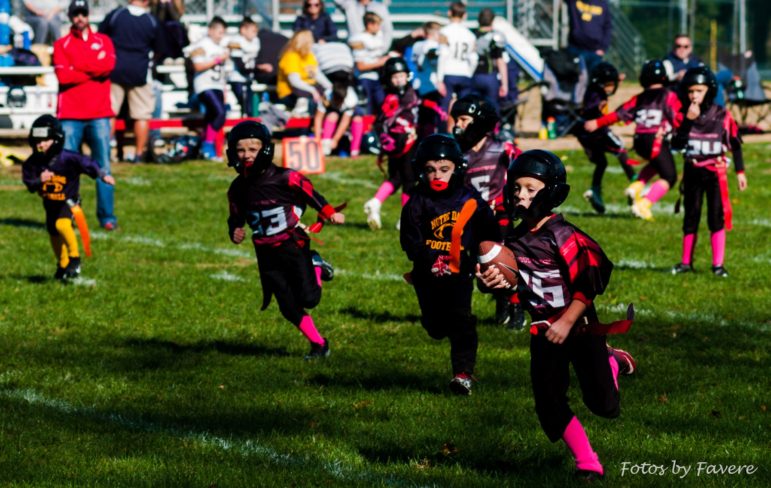 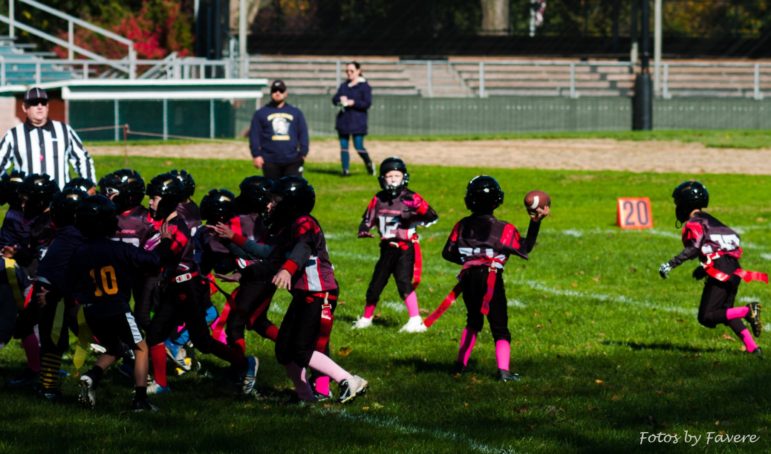 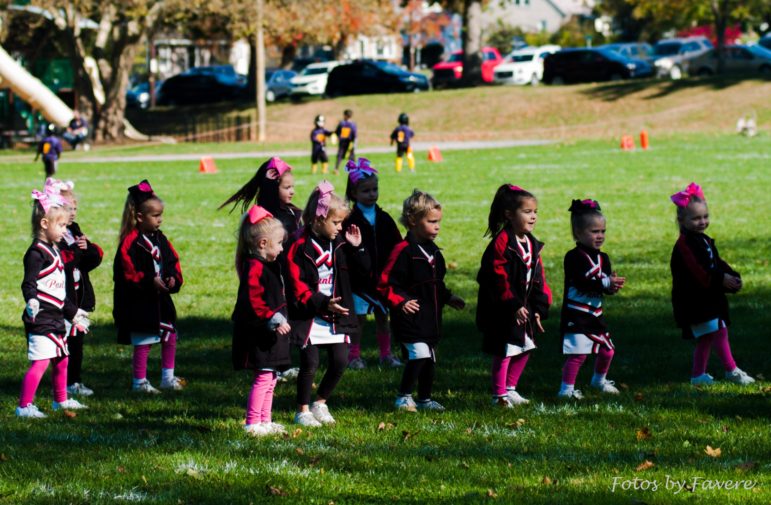 The Competitive Flag cheer squad dances to a song about finding a cheerleader. during halftime. 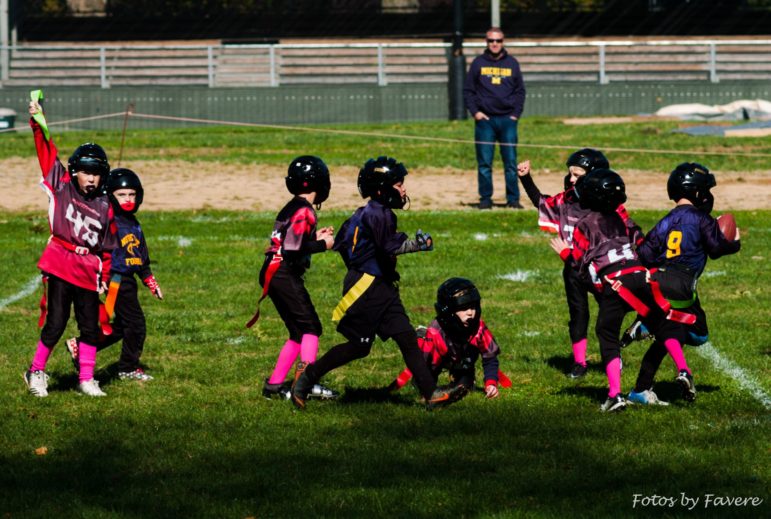 #45 Jaxon Walser holds a flag up high to celebrate a stop for loss on the play. 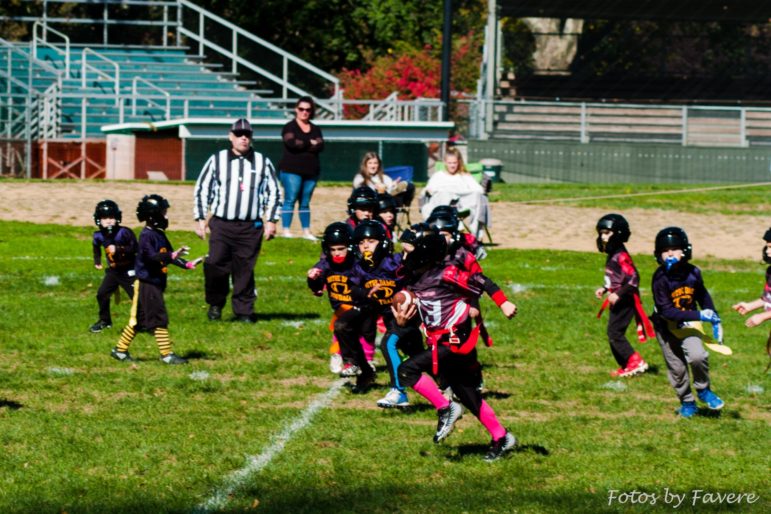 #33 Hudson Mertz finds a crease in the defense, runs towards the sideline and goes the distance for a score. 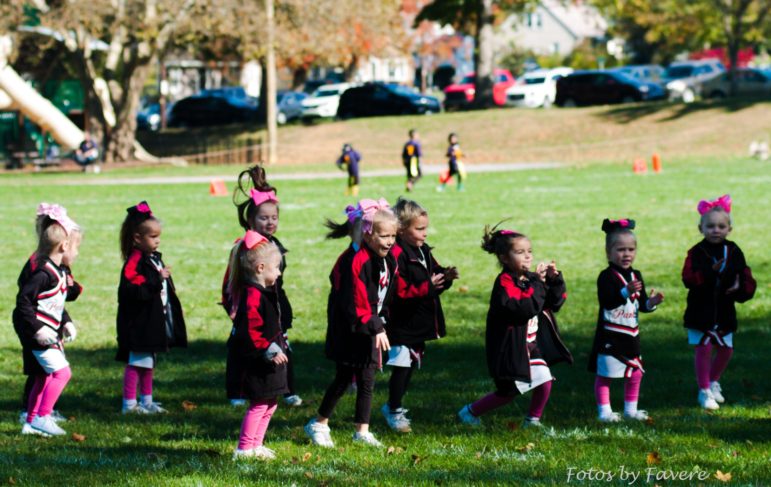 The Competitive Flag cheer still dancing away for halftime.

The Junior Varsity squad came into the game with a 3-5 record and were anxious to right the ship after playing some tough games against the top-rated teams in the division. The visiting Crusaders got the ball to start the game, and the Panther defense came up big, notching a few tackles for loss before turning the momentum of the game with a fumble returned for a touchdown by #27 Elijah Slachtianshyn (pictured below). Due to the play of the defense, the Panther offense did not see the field the entire first quarter as they took a 6-0 lead into the second. The Panthers’ D continued to play well, shutting down the Notre Dame offense on their first possession of the quarter. The Panther offense then stalled out on that drive and punted back to the Crusaders, who had possessed the ball for most of the first half, yet had zero points for their effort. The Saucon defense came up big again, with #38 forcing a second fumble, recovered this time by #28 Jake Peters. That’s when the Panther offense went to work on a six-play drive and finished it on a 19-yard touchdown run by #20 Grayson Schmell, taking a 13-0 lead into the halftime break. Saucon started with the ball in the third quarter, but fumbled it away. Although the defense was playing well, being out there for so many plays in the first half started to wear them down, and they gave up a lengthy 11-play drive for a touchdown that allowed the Crusaders to catch some momentum early in the fourth quarter. The Panthers needed a rest for their defense, and were relieved when the offense had the ball, but a three and out put the Saucon defense back onto the field. They fought to hold them on a five-play drive thanks to a tackle for loss, and a sack by #85 Brayden Frey. As the Crusaders (no pun intended, well maybe actually) attempted the “Hail Mary”#20 Grayson Schmell leaped way up to high point an interception (pictured below). Not only did he get the turnover, but he also then ran it back for a score as time ran out on the clock. The Panthers’ win by a score of 19-6 improved their record on the season to 4-5. Last week I believed them to still be in the playoff hunt, but I was informed that it was different this season, with the switch to the 10 game schedule. Now only the top four teams qualify, instead of last year’s six. The Panthers currently sit in fifth place but with the team in fourth place already having six wins the playoffs are just out of reach. Things could be different for this team, which lost two games this season due in part to some controversial officiating. They look forward to playing on the turf in Palisades Sunday to close out the season. 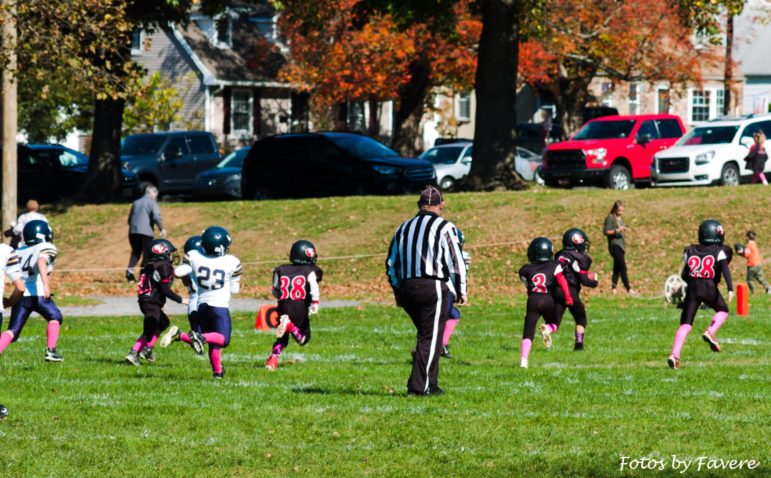 #27 Elijah Szlachtianshyn has a convoy of blockers escorting him to the end zone on this early game fumble recovery. 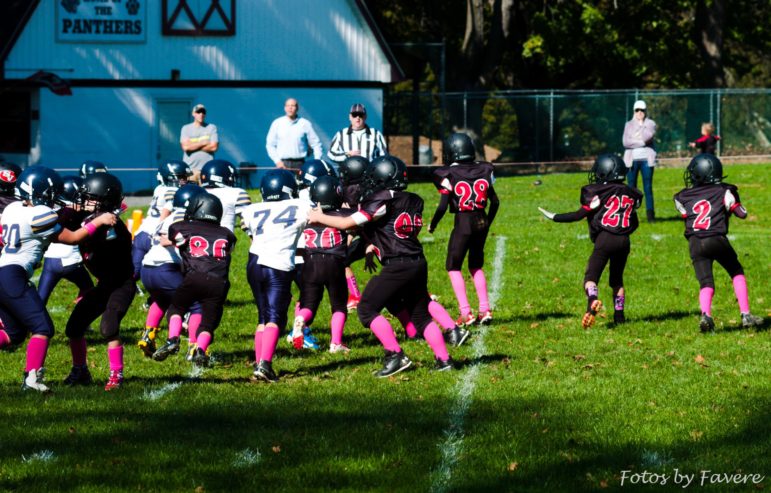 #2 Christopher Chaffier sets up to throw a pass on a point after try. 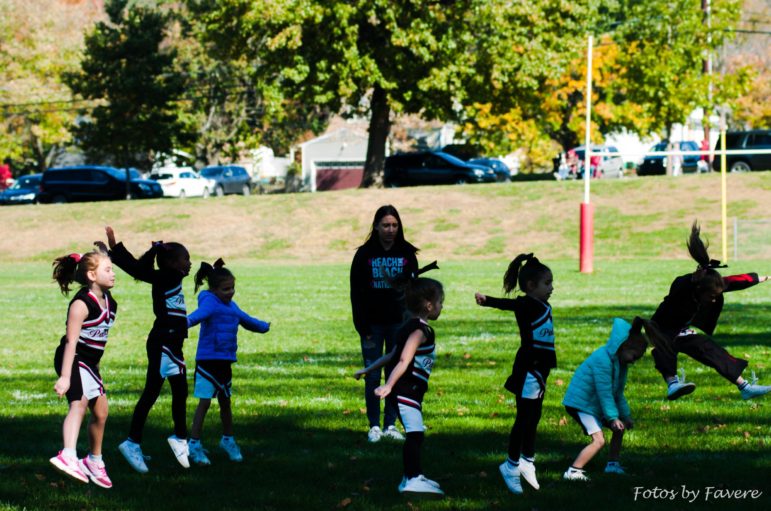 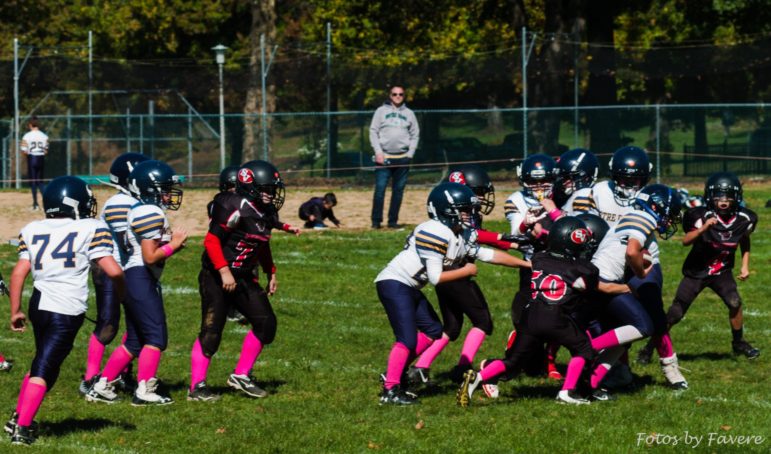 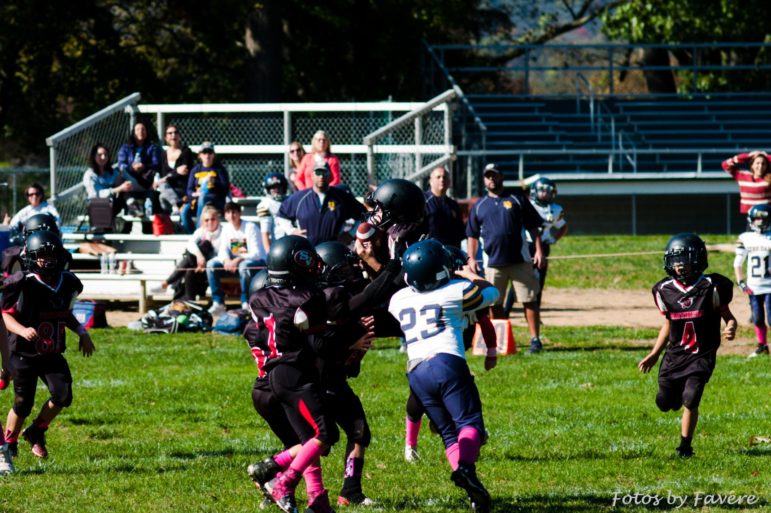 #20 Grayson Schmell jumps way up to snag this game-clinching interception and return it for a Panther touchdown. 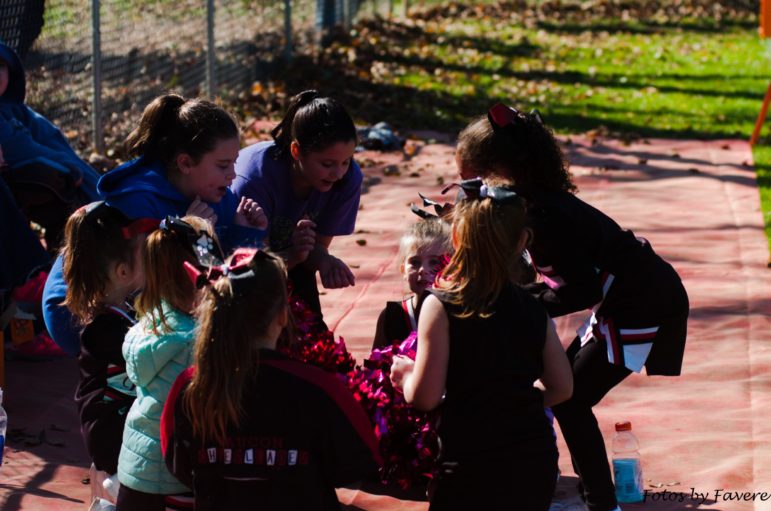 “We’re from Saucon, couldn’t be prouder! If you can’t hear us we’ll say it a little louder!”

The final game of the afternoon was of course the Varsity division game, and this one certainly did not disappoint the hometown crowd. After the moving up ceremony, the Panthers were fired up and #18 Hector Mateo set a physical tone from the start, dominating on both sides of the ball. Mateo registered two touchdowns on offense and five tackles four for loss on defense, and that was just in the first quarter. On their next possession, the Panthers let #25 Anthony Maholland get some work and he gained 45 rushing yards and a score on two carries while adding three tackles and one for loss on defense. Add in a touchdown from #24 Mason Kares and the kicking of #10 Peter Albano and the Panthers led the Crusaders 26-0 at the end of the first half. The third quarter started with the ball belonging to the visiting Cusaders who mounted an eight-play drive that culminated in a touchdown. With their next possession the Panthers dive stalled and then turned the ball over on downs. The Crusaders had the ball back but were running out of time to try to mount a comeback. A bit more strong defense held the Crusaders off the board, and #36 Jackson Albert finished them off with an 80-yard touchdown run. The final score was 32-7 in favor of the hometown Panthers, who sit in fourth place with a 7-2 record just below the 3-way, 8-1 record tie for first place. A win next week will keep them in their current playoff seeding, but Nortwestern and Catasauqua–two of the three teams tied at 8-1–play eachother, so the Panthers could potentially move up in the standings. 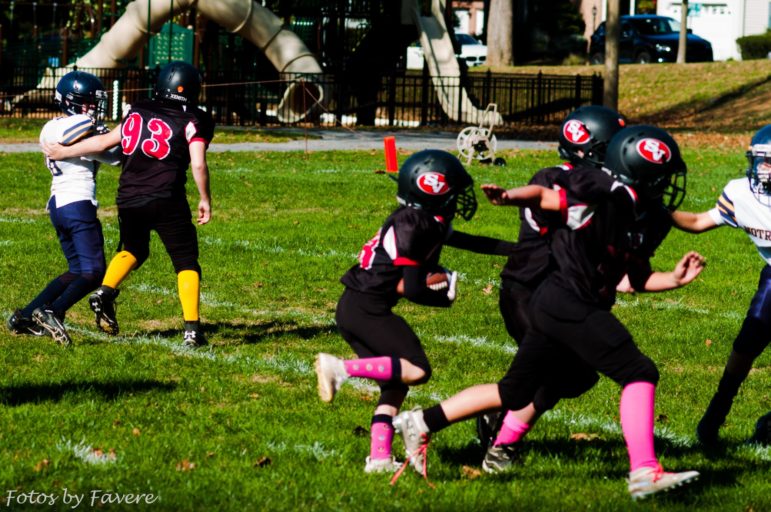 #26 Frank DiRusso pounds the ball down to the 2-yard line. 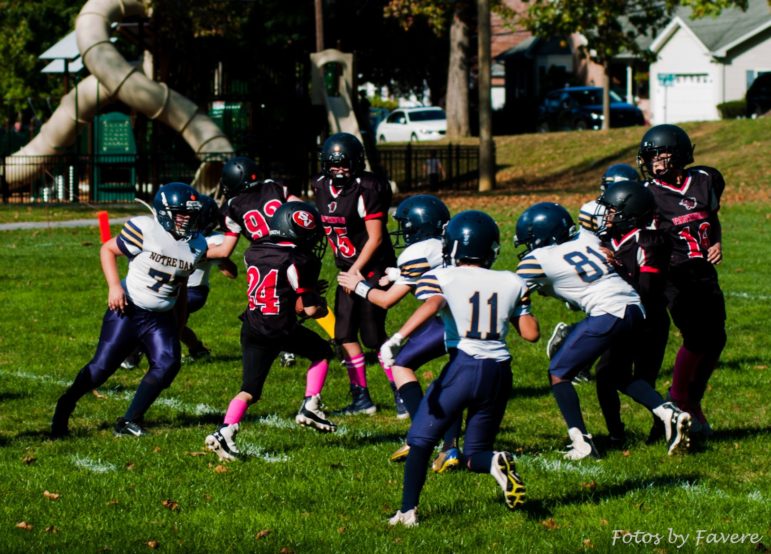 #24 Mason Kares blasts into the end zone for a Panther score. 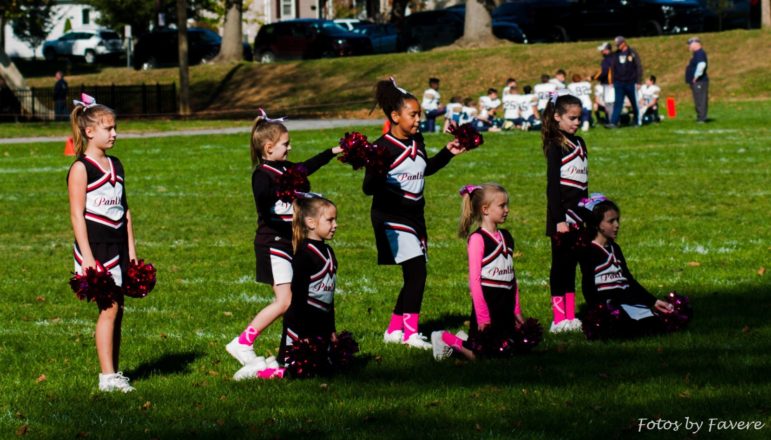 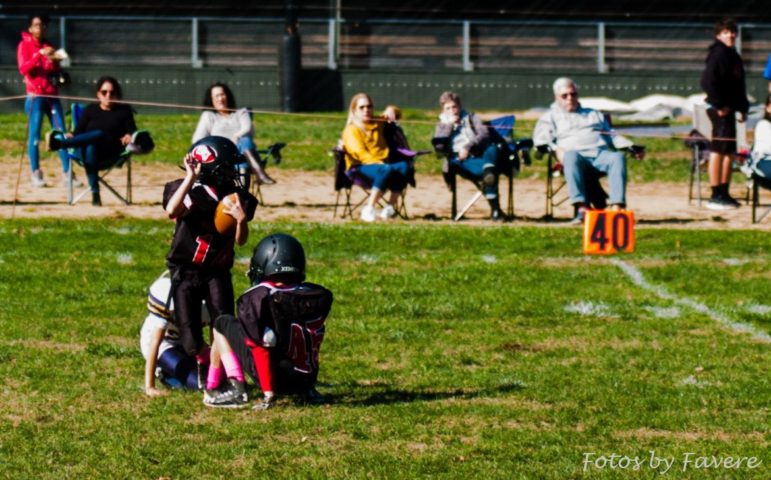 #14 Matthew Ewashko comes down with an interception. 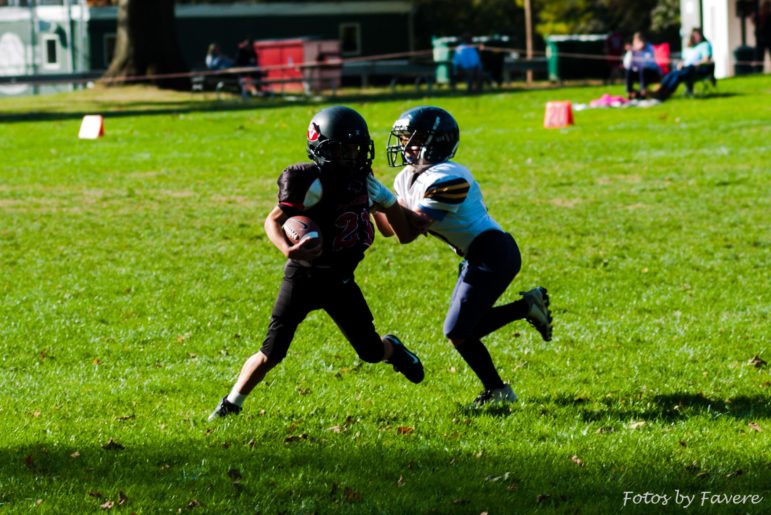 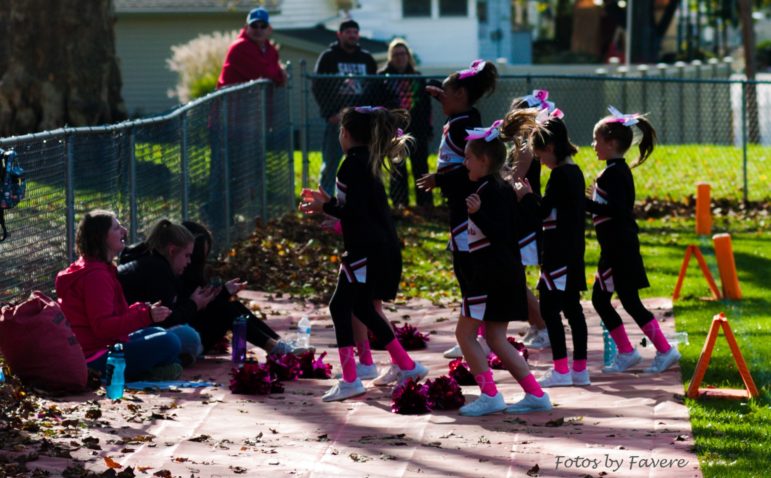