Note: The following is based upon a news release from the Bucks County District Attorney’s office.

The Bucks County District Attorney is fighting back against e-cigarette makers JUUL and Eonsmoke LLC, announcing Wednesday the filing of a lawsuit alleging a plot to lure minors into getting hooked on vaping.

The suit filed in the Bucks County Court of Common Pleas demands that JUUL forfeit its “ill-gotten” profits, put an to end to its “pervasive, predatory business practices in Bucks County” and fund addiction treatment and education. 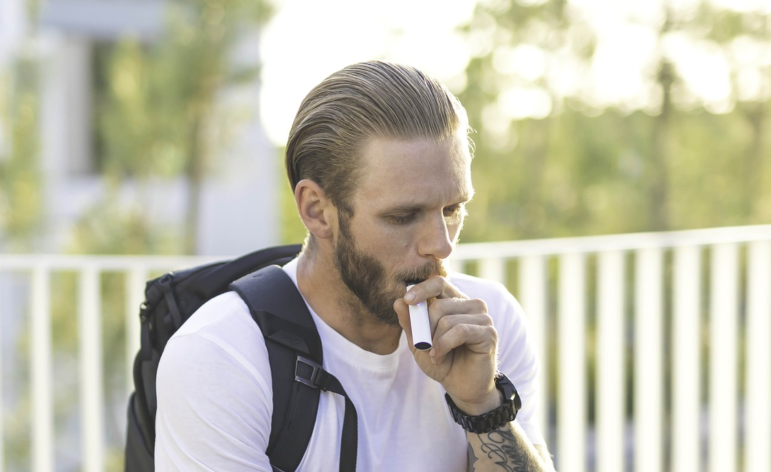 The complaint, which details how JUUL allegedly used marketing practices long-banned in the tobacco industry to market its product to children, is brought under Pennsylvania’s Unfair Trade Practices and Consumer Protection Law (UTPCPL).

The lawsuit asserts that the defendants’ actions are potentially harmful to every citizen, particularly the county’s more than 100,000 school-age children. Central Bucks School District is Pennsylvania’s third largest, with more than 20,000 students.

By October of last year, the complaint states, more than 1,000 lung injuries related to vaping had been reported in 49 states and 26 deaths had been recorded, including one in Pennsylvania.

“Through deceptive marketing that targets our children and with its network of retailers, JUUL has created a public health crisis,” said Weintraub. “Together we are sending an unfiltered message to JUUL and to all retailers who knowingly traffic e-cigarettes to minors: your false, deceptive and harmful business practices will not be tolerated in Bucks County.”

“We also filed to hold JUUL accountable for its actions and believe it should help to fund treatment programs for teens addicted to their products as well as fund outreach and educational programs to stop additional teens from becoming addicted,” Steele said. “We also need to get the word out to parents to be watchful for these small JUUL devices that look like computer flash drives, and to talk teens about how harmful JUUL-ing is.”

Bucks County’s lawsuit asserts that JUUL has “turned a generation of minors into addicts, constantly craving a hit of nicotine.”

As for the two named defendant-retailers, Weintraub said both were cited by federal authorities following a national sting operation in the summer of 2018 for illegal sales to minors of JUUL and other e-cigarette products.

The Bucks County District Attorney’s Office is represented in the litigation by Saltz, Mongeluzzi, Barrett & Bendesky, P.C., through its consumer protection practice department. SMBB partners Patrick Howard and Simon B. Paris, who are based in Horsham, have successfully handled scores of similar cases, recovering damages as a result of false and deceptive business practices to the detriment of the public.

“It is important to note that our attorneys in this case will only receive compensation if the litigation is successful,” said Weintraub, “and those proceeds would come from the defendants, not taxpayers.”

Howard, of SMBB, said Bucks County is entitled to reimbursement from the defendants, and the costs to taxpayers from prevention-education to enforcement are skyrocketing.

“Bucks County is, tragically, among the leaders when it comes to student vaping. For example, while statewide 25 percent of high school students surveyed say they have vaped, in Bucks County that number is greater than 37 percent,” he said. “As our experts have stated in the complaint, this is a public health crisis.”

The civil penalties and abatement costs sought would be applied, in part, to paying the costs of programs in Bucks County for: health care services and programs associated with the early detection, ongoing testing and monitoring for detection of illness, disease process or diagnosis and treatment of resulting injuries and adverse health consequences of JUUL’s conduct; combatting the abuse and diversion of the use of e-cigarettes by minors including tobacco education programs, cessation programs for users and public information campaigns to warn users of health effects and the addictive nature of the product; studies and research of the short and long-term effects of e-cigarette use in minors and the possible cures and treatments for the detrimental effects of using it; law enforcement and other services and costs associated with the harm done by JUUL to public health and safety in Bucks County.

Weintraub said Bucks County is fortunate to have an outstanding Drug and Alcohol Commission that is among the leaders in providing excellent resources to the community regarding  vaping and e-cigarettes. He also cited the work of the nonprofit CB Cares Educational Foundation, and, in particular, a local student who produced an award-winning public service announcement–Up In Smoke PSA–on the hazards of vaping.