Simmons announced last month that he will not seek re-election to a sixth term.

“I look forward to delivering my message and discussing my qualifications with the voters of the 131st State House District,” Lightcap said. “With over 35 years’ experience as a businesswoman in finance and manufacturing, I have a unique perspective on what strengthens our economy and how jobs are created, and I can tell you, the best way for government to help business is to get out of the way.”

A two-term Republican mayor of Pennsburg, Lightcap said she was the first woman mayor ever elected mayor of the small Montgomery County borough. 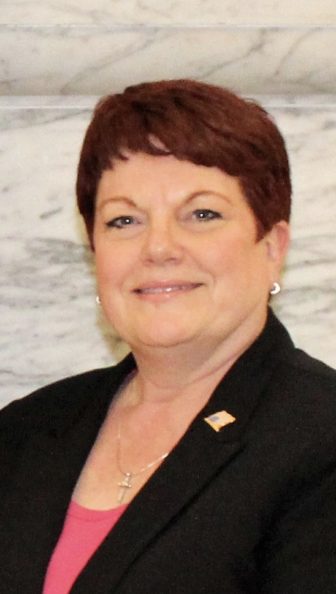 Vicki Lightcap, who is currently the mayor of Pennsburg borough in Montgomery County, formally announced her candidacy for state representative Thursday. (Contributed photo)

She also said that as former president of the Upper Perkiomen School Board, she helped hold the line on taxes “and worked to form a public and private partnership to establish before and after care services for working families, a first for the district.”

“Our next state representative must be a true conservative, and my record speaks for itself,” she said in her news release. “I’m proud to say that I’ve never voted to raise taxes and always respected taxpayer dollars. I’m also a staunch conservative who will fight to protect our constitutional rights and life.”

As a member of the NRA, Lightcap said she will protect second amendment rights if elected. As a wife, mother and grandmother, she was motivated to run for the seat in order to do her part in “making sure future generations live freely, safely and prosperously,” she added.

“Like all things worthwhile in life, winning this election is about putting in the work, and I promise my supporters and the voters that I will knock on more doors, meet with more voters and work harder than any other candidate in this race,” Lightcap said.

Running against her in the Republican primary race for the seat this spring are Lehigh County commissioner Nathan Brown and Lower Saucon Township businesswoman Milou Mackenzie.

So far Hellertown business owner Kevin Branco is the only Democrat who has entered the race for Simmons’ seat.