At the first Saucon Valley School Board meeting in January, parent Jennifer Schmell told board members she would return Jan. 28 to again demand action on the hiring of a district resource officer, and this time with backup.

Schmell kept her promise Tuesday night, when she and several other parents confronted the board and administrators about their refusal to date to hire a resource officer; something they said every other Lehigh Valley school district now has.

Trying to understand why Saucon Valley has chosen to go it alone with its officer-less security strategy left some of the parents who asked questions visibly frustrated; particularly when their questions went unanswered due to a board policy that limits their right to receive responses to matters that are on the board’s meeting agenda.

After an awkward silence her question remained unanswered.

Board solicitor Mark Fitzgerald told Butler he did not have to respond, to which Schmell responded, “I don’t think that that’s good enough.”

“This is not a question-and-answer process,” Fitzgerald explained. 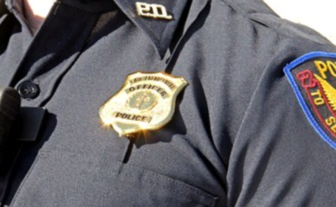 The solicitor, too, seemed to become frustrated, especially after several parents converged on the visitor podium and said they wanted to speak in conjunction with Schmell, telling the group “no, no, no, no, that’s not how this works.”

“The board has responded in part by meeting with you directly, (and with) the response from Dr. Butler…” Fitzgerald told Schmell.

The response from Butler was earlier during the meeting, in a statement highlighting recent improvements the district has made to its security protocols and technology.

Schmell said she has not met with anyone from the school district to discuss the hiring of a resource officer or officers, and told the board things like upgrading the district’s surveillance system and a community task force are a step in the right direction, but don’t negate the need for a resource officer.

“So, what is the process to get questions answered?” Schmell eventually asked Fitzgerald.

“The board and the administration will respond as they determine necessary to the inquiries that are brought forward by the public,” he told her.

Another parent, Angela McFetridge, then asked what would necessitate a response by a district official to a question or concern shared by a parent.

“I’ve emailed this board many times after many of the safety issues we’ve had,” she said. “I can’t get a response. I would like to know why we are so against an SRO officer.”

McFetridge, who said she has taught in area public schools for more than 15 years, told the board Saucon Valley is “behind the ball” when it comes to safety and security.

“You have some work to do,” she said. “Your ALICE (Alert-Lockdown-Inform-Counter-Evacuate) training? (In the Quakertown Area School District) we’ve been doing ALICE training for years. You have just started.”

McFetridge also took the board and administration to task for allegedly relying too much on the protection provided by the Lower Saucon Township Police Department, whose headquarters are at least several minutes’ drive from the district campus.

And in her remarks, Schmell highlighted the fact that the Lower Saucon Township Police Officers Association shared a news story about her previous board presentation on its Facebook page as evidence of the local police believing a resource officer is needed.

“When are children killed? It’s in the first 20 to 30 seconds (of a school shooting),” McFetridge told the board. “Having an SRO offficer? Sure. Could something still happen? Absolutely. But they have a better chance of protecting our kids.”

“I work in a building where they have an SRO officer and it’s a great thing for the kids,” she added. “They have built such a relationship with the officer…”

“There’s nothing like somebody being there, and responding within seconds, as opposed to a five-minute ride to the police officers,” parent Christine Bauer told the board.

Another district resident who shared his views was Steven Young, who said he previously spent 10 years working in federal law enforcement.

“If you’re going to ask a teacher to protect the kids, that’s like asking a law enforcement officer to teach, so you better think about that,” Young said.

Quakertown Area High School teacher, district resident and father Barry Stoneback Jr. followed up on Young’s comment by sharing a statistic he said is sobering, as part of a presentation he had prepared.

“I’m here tonight due to the perception–and it’s obviously not a perception–that this board is not interested in hiring a resource officer, and I just don’t understand that,” Stoneback continued. “Every single day this campus houses 2,408 students, approximately, which is 15 percent of this community, and it’s our most precious commodity–in this building. If we have a concert–a sporting event–with 2,500 people at it, would we hire police? Would we expect to police to show up? Would we have security guards there?”

Stoneback then explained what the Quakertown Area School District SROs with whom he works do as part of their duties, which he said involve being “proactive rather than reactive.”

One of their responsibilities is maintaining student cyber safety, which he questioned in Saucon Valley in light of the fact that the district does not have a specific social media policy for students, according to the Saucon Valley School District Policy Manual Table of Contents, which does include a cyberbullying policy.

“You do not have a policy for social media?” Stoneback asked the board.

“You’re not supposed to respond,” Stoneback told him. “If you’re gonna respond, then great. That’s awesome. But then show me that policy.”

“Sir can I just comment…” began to interject Butler, before Stoneback cut him off, telling him, “No, you’re not supposed to respond.”

“With all due respect,” said Fitzgerald. “This is a prerogative-”

“You didn’t show these people respect,” said Stoneback, turning around and gesturing toward Schmell, McFetridge and the other parents seated in the first row of seats.

“We gave them their opportunity to comment,” argued Fitzgerald, who was subsequently backed off after being told by board president Shamim Pakzad, “Let (Stoneback) talk.”

Stoneback picked up where he had left off in his presentation, and proceeded to tell the board that contrary to what some people believe, school resource officers are on staff to do much more than simply protect students in a potentially violent situation.

“A vast majority of an SRO’s time is spent maintaining trusting relationships with our children,” he said. “These relationships help create a solid foundation between the police and the future of our community, and help make the students feel more comfortable with approaching the police when something needs to be reported that could threaten the safety of our students, teachers and staff.”

“We all know one of your reasons for not hiring an SRO is cost, and I get that,” he said.

However, Stoneback noted that Pennsylvania’s Act 44 of 2018 created a $60 million grant program for public schools to enhance their safety and security with protocols such as the hiring of school resource officers. He said there are “countless” other grant programs available to the district as well.

When Stoneback finished speaking, Schmell resumed her presentation and asked the board if there is any independent research that has been conducted in order to draw the conclusion that a school resource officer isn’t needed in Saucon Valley School District.

Schmell said the school’s bullying task force–which she has been asked by Butler to join–has a major “hole” in it, that being “a resource to go to for reporting.”

“In order for your task force to be effective you need a resource officer in that role,” she said.

Schmell concluded by telling Butler his “contract could potentially be coming to an end.”

“Do you want your legacy to be the most ineffective bullying policy on record and the only school in the Lehigh Valley without an SRO, or do you want your legacy to be improving the safety of every child in this district?” she asked. “I think that answer will determine your contract and whether it’s extended. It seems pretty clear to me and every other school in the Lehigh Valley, but what is it Craig that you need in order to make a recommendation to this board for an SRO?”

Butler responded by saying he would take all the comments back to his administrative team for discussion, before potentially bringing a recommendation to the board.

“It’s unrealistic and improper I think for you to come to the board, speak passionately and then get no answers from me as superintendent,” he said. “I don’t plan on doing that. And I think, case in point Jennifer is my reaching out to you in the last couple weeks.”

“My two previous districts…had SROs,” he said. “So I do have experience–several years, actually two decades of experience–with SROs or SPOs (school police officers).”

He reiterated that he will discuss the matter further and review information that was shared at prior meetings about school resource officers, including their pros and cons.

School board member Mike Karabin then asked Butler whether he could recall any police department recommending that the district hire a resource officer. Butler said he didn’t.

Karabin said he has done more research “on this type of issue than anything else on the board over the years that I’ve been doing this.”

“After all the research I did I was sort of leaning more towards–it’s not as effective as you may think it is. It has its benefits. It has its pros. But there are other things that are just as important,” he said.

Schmell then approached the podium, apparently to rebut his comment.

“I’ll leave it at that. Nevermind,” Karabin then said. “I know it’ll just constantly argue. I would suggest one thing though. Anybody that is truly seriously concerned about making a difference in this school district should be attending all these committee meetings or meetings (Butler’s) setting up to address these issues, because that’s where the work and the information–all the data that comes to us–comes from.”

Click here to watch a video recording of the entire school board meeting including Schmell’s full presentation on YouTube, or watch it below.

The next Saucon Valley School Board meeting will be held Tuesday, Feb. 11 at 7 p.m. in the high school Audion room. Meetings are open to the public.