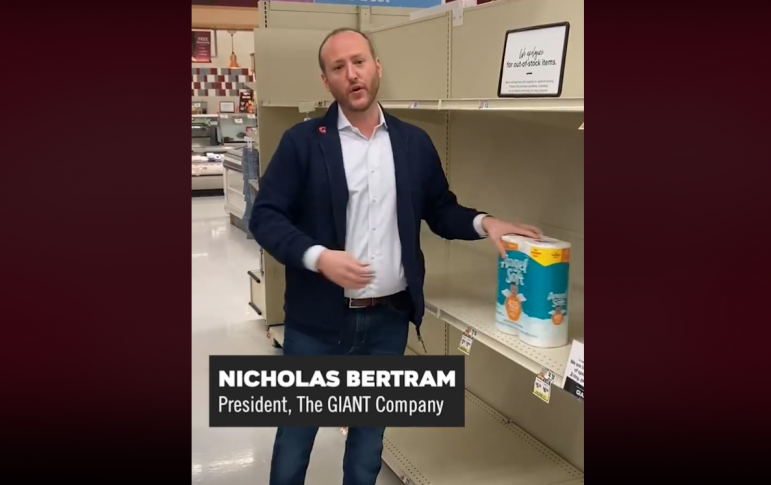 The Giant Company president Nicholas Bertram stands next to a nearly-empty toilet paper shelf as he encourages customers to voluntarily limit what they buy to only what they need in an educational video promoting consideration. The Facebook video is part of the company’s new #MoreForAll social media campaign designed to help stop panic-buying of groceries during the coronavirus (COVID-19) pandemic.

Panic-buying and hoarding behaviors triggered by the current coronavirus (COVID-19) pandemic have decimated supermarket shelves across the country, and Giant shelves are no exception, with some customers saying they’re so empty the stores look like they’re going out of business.

The Giant Company previously announced that it was placing limits on certain “key category” items like hand sanitizer and toilet paper in an effort to try and stop the behavior, which many customers say is preventing them from accessing items they need.

On Thursday, the company announced another step to try and stop panic buying, which involves the use of a social media campaign it has launched called #MoreForAll. 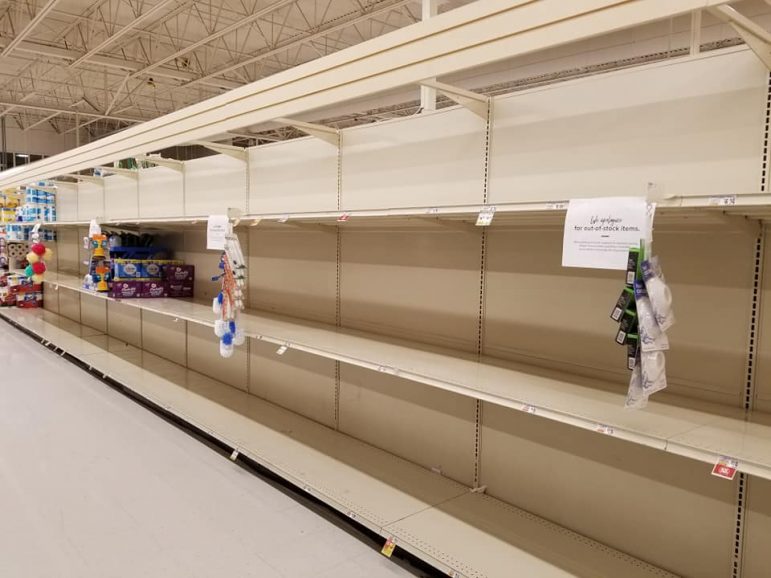 There was barely any toilet paper to be had in the Giant store on Leithsville Road in Lower Saucon Township on a recent evening during the COVID-19 pandemic. Panic buying triggered by fears over the spread of the coronavirus has emptied many local supermarkets of items such as toilet paper, hand sanitizer and disinfectant sprays. (FILE PHOTO)

“The Giant Company wants to make sure everyone in its local communities has a full plate tomorrow and beyond,” the company said in a news release about the campaign. “As grocers continue to do their part and as key products return to store shelves, Giant is asking its customers to limit their purchases to what they truly need right now. By giving everyone access to essential items, you’ll allow everyone to care for themselves and their families and ensure our local food banks can continue to serve their communities in this time of need.”

In a video posted to Giant’s Facebook page, company president Nicholas Bertram as well as a food supplier and a food bank representative stress that “we can’t do this alone.”

“This is about more than groceries. It’s about taking care of one another, and being careful not to overbuy,” Bertram said. “Take some for you, and leave more for all.”

Whether consideration for others is something that can be taught in the middle of a public health crisis is unknown, and a number of shoppers on Giant’s Facebook post about the launch of #MoreForAll expressed skepticism over the attempt to do that as well criticism of how the company has handled panic-buying in the past few weeks.

One customer suggested that the store should further promote the idea of self-limiting purchases by switching to single unit pricing of sale items featured in its weekly circular, which typically promotes offers of “four for $10” or “two for $6.”

A representative said the feedback would be taken under consideration.

“If you don’t put limits on the important items in the store some of us will continue to go home without the needed items to sustain life,” said another shopper. “I’ve watched people run thru the self check(out) where no one will stop someone buying more than they should. I’ve watched an older man on the first day of the senior hour take three packages of 20 roll (toilet paper) packages.”

In response to that, a Giant store representative commented the following:

Due to overwhelming demand, we are currently experiencing shortages and out of stocks on many household staples, including disinfecting and cleaning products. We are focused on getting back in stock as soon as possible. As categories return to our shelves, we kindly ask that all customers limit their purchases to what they need right now. We have also placed a “limit of two” on key categories throughout the store, including paper goods and disinfectant products. We apologize to our customers for this inconvenience.

According to sources familiar with Giant’s limit policy, the company has not programmed store registers to require a manual override by a manager if a customer attempts to purchase more than the maximum number allowed of a limited item. Limits are advertised with signage affixed to store shelves.

Another customer suggested that Giant expand its limits to include many other items, because she said she is having a hard time feeding her family due to the number of foods that are out of stock.

“How about you start imposing limits on pretty much everything of one or two per guest so people like me who have four children to feed don’t have to figure out what to feed them because your stores have NOTHING in them thanks to the vultures buying everything at once!” the customer asked.

The Giant Company operates nearly 20 stores in the Lehigh Valley area, including supermarkets on Leithsville Road in Lower Saucon Township and E. Fairmount Street in Coopersburg.

The company has announced numerous changes to its hours and procedures in recent weeks, as a result of the ongoing coronavirus pandemic.

Stores now close at 10 p.m. and reopen at 6 a.m. for seniors and immunocompromised individuals to shop from 6 to 7 a.m., and store pharmacies now open early every Wednesday so seniors can pick up their prescriptions before others enter the store.

The company also recently donated $250,000 to Pennsylvania food banks that have been negatively impacted by the coronavirus crisis just as they are bracing for a surge in demand due to skyrocketing unemployment claims.