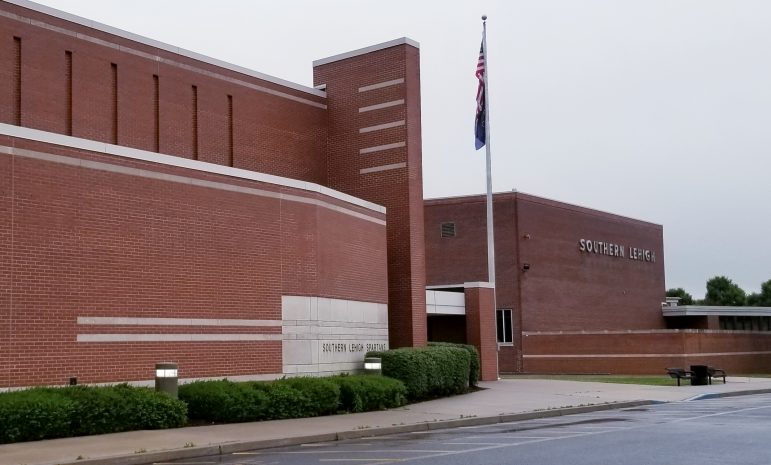 The Southern Lehigh School District is certainly no stranger to publicized concerns over a perceived culture of racism and intolerance. As a Morning Call article and 6ABC news segment from November 2016 recounted, an uptick in racist incidents in district schools reportedly followed Donald Trump’s campaign and victory in the November presidential election. Additionally, a Rolling Stone article from March 2017 provided an even more in-depth look at racism within Southern Lehigh, as well as in neighboring districts like Saucon Valley and East Penn.

Two students who were attending Southern Lehigh during this time were Class of 2018 graduate Kyra Salamon, a white student who is a rising junior at the University of Vermont majoring in Spanish, and her classmate Sarah Triebecka, who is also white and currently studying international affairs and Spanish at George Washington University. Even though they have both since moved on in their respective educational journeys, they still felt compelled to recently draft a Change.org petition for “Mandatory Anti-Racism Training & Education in Southern Lehigh School District.”

The petition is addressed to the Southern Lehigh School Board and cites “countless instances of racism” in requesting action from administrators to address “racial disparities.” As of Wednesday night, it had received nearly 1,900 signatures.

“As alumni and community members of Southern Lehigh School District, we care for the education and moral growth of our school, and we ask that sweeping reforms be made and measures implemented to effectively combat white supremacy and racism,” Salamon told Saucon Source. “It is simply not enough for the superintendent to say that their efforts to fighting against racial disparities include ‘providing resources, access to services and the opportunity to engage with us in conversation.’”

The petition outlines 10 proposed measures drafted by Salamon, including an increase in curricular material centering on racism and black history for students, more anti-bias training for teachers and increased punishment for students who exhibit racism which she “implore(s) the school board to consider implementing…over the next few years.”

In an email interview conducted earlier this week, Salamon said inspiration for the petition “…was certainly sparked by the Black Lives Matter movement and the current climate of the country” but called it “long overdue.”

“This school district is sorely lacking in racism education, which should have been addressed decades ago,” she said. “I can say with absolute confidence that the information and resources available on social media have taught me and countless others more in the duration of this current civil rights movement than we were taught in our entire 12 years in this school district.”

Triebecka added that “a user on Instagram @leahpetty_ posted something that started with ‘White Suburbia, I know you have time to read this,’ and it talked about how the more white people in majority white communities remain blind to our privilege and indifferent to racial injustice, the longer it will take to dismantle inherently racist and white supremacist systems and ideas. In the post, she recommends that white people in these communities create petitions to fight for unbiased anti-racism education in their public schools, so that’s when I asked Kyra if she would be interested in starting one with me, especially because I’m personally disappointed that we never learned about redlining, racist zoning, mass incarceration, the War on Drugs or even the lasting impacts of Jim Crow laws in school. I had to seek out that information myself as a student in college, and doing so DRAMATICALLY changed my perspective on racial disparities in America, so I firmly believe that education is the most effective weapon against both covert and overt racism.”

When asked to describe some of their experiences with racism in the district, a former student of color as well as two district parents (one of whom has children of color) were willing to speak on condition of anonymity, which Saucon Source granted due to the potential for harassment and/or bullying by other individuals to occur.

The former student, who attended Southern Lehigh in the late 2010s, described the experience they had on their first day in the district, saying “they obviously felt they needed to treat me differently from the start…they had a black student show my brother and I (a minority) around campus so I’d ‘be more comfortable.’ Those were the exact words of the person who introduced us. As if her simply being a student and in my grade wasn’t what made her qualified to welcome us, but the fact that she was black did. I understand why this happened, but it was not necessary. My last name doesn’t mean I’m not an American, so why assume?”

The former student also described what they felt were racially insensitive, school-sponsored events such as “Spirit Days,” one of which they said was a “‘Gangster Day,’ which consisted of typically African-American attire like big hoop earrings, bandanas, gold chains, pants sagging, etc.”

“A personal friend of mine who is Jewish would get spit on and coins thrown at her,” she added.

The district parents Saucon Source spoke to also provided examples of racism which they said was experienced by their children while attending Southern Lehigh schools, as well as inaction from district administration. One parent, who is the mother of children of color, described a meeting she had with administrators after complaining of racism experienced by her children in an email interview earlier this week. She said that after she was invited to attend a meeting, “they asked me ‘What do you want us to do?’”

“I think my jaw hit the ground!” the parent recalled. “I told them, ‘I don’t get paid to do your job for you, but I do know that there are thousands of resources available to the district to teach racial tolerance and acceptance of diversity to your students.’”

She went on to say that the district’s response was to send all of the black students to a multicultural conference at Lafayette University in Easton. Feeling as though this was an inappropriate and tone-deaf response, she asked, “Why would you send the diverse children to learn about diversity?”

The other parent, who has also had several children attend Southern Lehigh schools, provided Saucon Source with an email sent by Superintendent Kathleen Evison last Friday in which she addressed issues involving and related to racism. She described the email as “(touting) a diversity and inclusion committee that supposedly no longer exists.”

“Unfortunately, some people have deep rooted ideas about different groups of people and they pass it along to their children, and generations become infected with misinformation,” she said. “So many students who go away to college in more diverse areas have an awakening and begin to see things in a different light.”

Salamon and Triebecka also described what they felt were less-than-satisfactory exchanges with administration in the past, which they said helped compel them to circulate their petition.

“My first step was emailing the superintendent, who replied with an extremely vague statement of what their efforts were,” Salamon said. “I then started reaching out to each individual member of the school board, from only one of which I received a response.”

Triebecka said last week that on Tuesday (June 2) she “emailed the superintendent and the school board saying essentially that I was disappointed about my lack of anti-racist education, my prolonged ignorance of the reality of our country’s racist history and their lack of support for people of color in the wake of the Black Lives Matter movement. That was three days ago, and as of today, they never responded to me.”

When asked for comment, Superintendent Kathleen Evison did not directly address the question of whether or not the district intended to respond to the 10 measures specifically requested in the petition, but referenced a Curricular Cycle for Excellence initiative started in 2017 in which different subjects are entered in different years for revision and expansion. She said that English language arts and social studies are scheduled to enter this year and “while all subjects are equally responsible for high quality inclusive curriculum that emphasize equity and diversity, these two subjects in particular are where a majority of opportunities lay to deepen and expand this work.”

Evison has been superintendent of Southern Lehigh schools since September 2016.

Salamon and Triebecka both expressed a desire to continue with their efforts, even if they feel they’ve been rebuffed by Southern Lehigh administration in regards to their petition.

“My hope is that we can take this all the way to the state, and to do that we’ve been gathering as much support as possible, from local organizations and neighboring school districts,” Salamon said. “Having as many names on this as possible would make our voice even stronger, and show that this is not just about the betterment of our school district, but of ones around us and ultimately all schools in the country.”

Triebecka added, “I’ve had some people both in the district and outside of the district, including teachers, reach out to me about their intention to fight for these changes, so I am confident that at the very least, this petition will start a much-needed conversation about the danger of remaining ignorant of and indifferent to racial injustices and racial disparities. At least now they know we mean business and we won’t back down until there is tangible change. Plus, now we’ve empowered community members, alumni and parents to speak out against this, since a lot of the comments on the petition say things like ‘it’s about time’ and ‘I want my child to be more educated on this.’”