The Bucks County District Attorney’s office announced Friday that a joint Drug Strike Force investigation has led to charges against a Dublin man and six other people for what authorities say was the long-running production of methamphetamine. 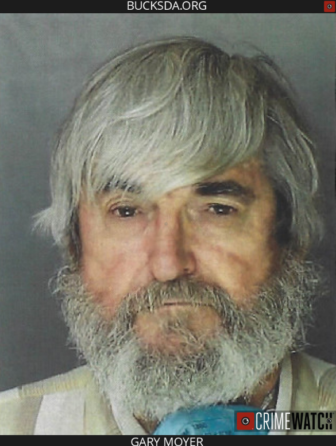 Gary Lynn Moyer, 70, is accused of running a meth lab out of his home on Cherry Lane in Dublin, Bucks County, according to information released by the Bucks County District Attorney’s office Friday.

It was announced that Gary Lynn Moyer, 70, was arraigned Wednesday on charges of operating a methamphetamine lab, possession with intent to deliver methamphetamine, conspiracy and other counts related to the organized production and sale of the drug.

Moyer was incarcerated after he failed to post bail set by District Judge Gary Gambardella at 10 percent of $750,000.

According to the district attorney, the investigation into Moyer by the Bucks County Detectives Drug Strike Force and the Bedminster Township Police Department revealed that he was allegedly “cooking” and selling meth out of his home on Cherry Lane.

The case was a joint investigation with the Dublin Borough, Bedminster Township and Quakertown Borough Police departments.

The DA’s office said that in addition to Moyer, six other people have been charged with acting as “smurfs,” or making routine purchases of items like over-the-counter medicine containing ephedrine and other ingredients needed to manufacture methamphetamine.

“The defendants delivered the items to Moyer, who then used them to produce meth,” the news release said. “Some of the defendants acted as a lookout while Moyer ‘cooked.'”

Authorities said each of the defendants was observed on several occasions going to Moyer’s residence after purchasing “precursor chemicals such as ephedrine from area pharmacies.”

Security footage obtained from the pharmacies where the purchases were made confirmed the purchase activities of the defendants, the district attorney’s office said, adding that the alleged “smurfs” were paid by Moyer in meth.

According to a criminal complaint, Moyer and his co-conspirators allegedly purchased enough medication containing ephedrine to produce nearly 2,000 grams of methamphetamine.