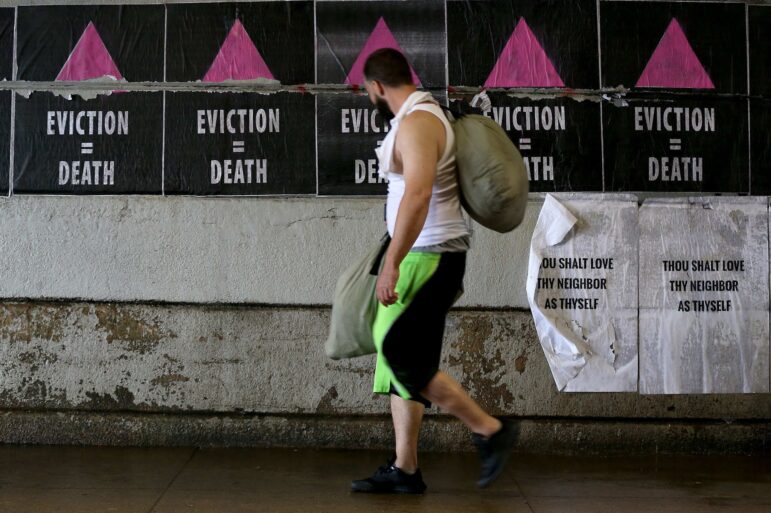 Due to the impact of the coronavirus pandemic on Pennsylvania’s economy, Gov. Tom Wolf issued a statewide moratorium on evictions for non-payment, which runs through July 10.

HARRISBURG — A $150 million assistance program intended to provide rental payments on behalf of Pennsylvanians who are struggling amid the economic fallout from the coronavirus may not come soon enough to stave off some eviction proceedings.

The program will begin accepting applications July 6, but the state’s eviction moratorium expires just a few days later. That creates a tight window for applications to be processed and checks to be cut before some landlords might take action.

“I just don’t see how it’s possible that people who need the rental assistance to avoid eviction will receive it in time,” said Phyllis Chamberlain, executive director of the Housing Alliance of Pennsylvania. “That is a huge problem.”

In March, the state Supreme Court suspended all evictions for failure to pay rent. A few days before that order was set to expire, Gov. Tom Wolf issued his own statewide moratorium on evictions for non-payment, which runs through July 10.

Come July 11, Pennsylvania landlords will be able to begin the eviction process, which advocates fear could lead to an avalanche of filings that overwhelm courts, displace vulnerable people amid a public health crisis, and further damage the state economy.

Approximately 1.5 million people in Pennsylvania rent their homes, accounting for about 30 percent of all households. At least one Pennsylvania county, Philadelphia, has extended its local moratorium. Wolf should do the same statewide, Chamberlain said.

Lyndsay Kensinger, a spokesperson for the governor, said “we’ll reexamine this as we get closer to July 10.”

Under Pennsylvania law, landlords must give tenants 10 days’ notice before filing for eviction in court. On average, the entire process takes at least a month, advocates said. Even in cases where the tenant isn’t actually evicted, Chamberlain said, the filing itself can become a “black mark for the future” with landlords.

The rental assistance program is part of a $2.6 billion spending plan lawmakers passed at the end of May, funded by Pennsylvania’s share of the federal stimulus package. Lawmakers also approved a $25 million mortgage relief effort that will also begin accepting applications on July 6.

The aim is to help tenants who have fallen behind on rent in the wake of the statewide shutdown Wolf ordered in March to contain the coronavirus. To be eligible, renters must show that since March 1, they either filed for unemployment benefits or lost at least 30 percent of their annual income. Their income must also not exceed the median for their county.

For those who meet the eligibility requirements, applications will be processed on a first-come, first-served basis, said Scott Elliott, a spokesperson for the Pennsylvania Housing Finance Agency, which is overseeing the initiative.

The assistance will cover up to six months of rent payments, up to a maximum of $750 a month per renter. Local organizations in each of the state’s 67 counties will receive and process applications.

Completed applications, though, will not be accepted until July 6, setting up a time crunch with the eviction moratorium, which currently expires later that week.

The designated organization in Dauphin County, Christian Churches United of the Tri-County Area, is bracing for a crush of applications, said executive director Darrel Reinford. Landlords could see money as soon as 10 days after an application is submitted, Reinford said, provided that tenants and landlords submit all the paperwork correctly the first time around.

“Our goal is to prevent evictions as much as possible,” he said. “If we know that someone’s back is against the wall, we’re going to get that processed as quickly as we can.”

Rita Dallago–executive director of the Pennsylvania Residential Owners Association, which represents more than 7,000 landlords across the state–said the time frame is “very tight. They’re going to have to really hustle.”

Still, the program is a good deal for landlords, especially given the uncertainty of replacing tenants amid a widespread economic downturn. Tenants may be able to stave off eviction filings by letting their landlords know that they have applied, Dallago said.

The Pennsylvania Apartment Association, which represents larger landlords, is encouraging members not to pursue eviction proceedings against tenants once they have applied for rental assistance, said Leah Sailhamer, the group’s vice president of government affairs.

“Our recommendation would be to let the resident stay while the application is processed,” she said.

The program’s hurried rollout was evident Monday, when the Pennsylvania Housing Finance Agency posted the application forms online, only to take them down after the agency realized some text was missing. Updated versions of the forms were back online by late afternoon.

On a list of local agencies that will process applications, a link to the Clinton County Housing Coalition went to a website for an organization with the same name in Clinton County, New York.

By law, the funding must be distributed by the end of November, although the Pennsylvania Housing Finance Agency has warned it will likely run out much sooner.

“I think the need is at least triple that amount,” said Dallago, of the Pennsylvania Residential Owners Association. “I’d like to be wrong, but I don’t think I am.”