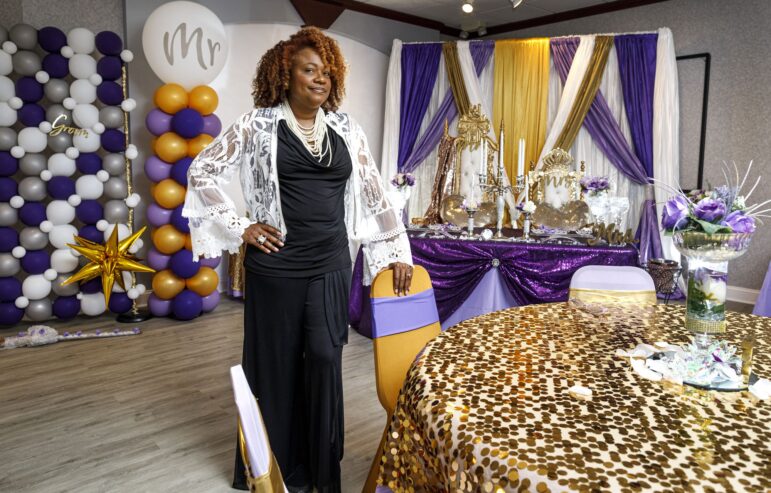 Karen Sawyer, seen here at The Party Palooza in York, is the kind of small business owner the state is trying to reach with a new grant program. Still, she hasn’t applied, calling the process “daunting.”

HARRISBURG — In March, less than a month into the coronavirus shutdown, Gov. Tom Wolf launched a low-interest loan program as a lifeline to “provide a little peace of mind to hundreds of small business owners and their employees.”

All $61 million was gone in less than a week, as business owners across the state raced to apply. But in the rush to stand up the new program and get relief flowing, no requirements were put in place to ensure businesses had a fair shot at the money–and many did not.

Of the 761 approved loans, only 41 — or five percent — went to minority-owned businesses, according to new numbers released by state economic development officials.

The results are consistent with an earlier review of the program by Spotlight PA that found it relied on a patchwork of local nonprofits spread unevenly across the state, putting some counties and the businesses located in them at a serious disadvantage.

Now, as the economic fallout of six months of business closures, reopenings and new restrictions comes into sharper focus, Pennsylvania is trying again.

A new $200 million grant program is specifically targeted at the smallest and most vulnerable businesses, many of which were left behind in the frantic rush for state and federal aid. Half of that money has been set aside for minority-owned businesses, which have been hit the hardest by the economic fallout of the pandemic, research shows.

“This is going in a completely different direction, trying to get deep into the heart of our neighborhoods,” said Sen. Vincent Hughes (D., Philadelphia), who helped design the new program. “We wanted to get through the noise of always hearing about loans and that loan conversation has been relatively negative.”

The new program prioritizes companies with 25 or fewer employees and less than $1 million in annual revenue. It offers grants, not loans, unlike the earlier state effort and the federal government’s major initiative to help small businesses, the Paycheck Protection Program.

Those programs both considered applications on a first-come, first-served basis, rewarding the businesses that were able to get their paperwork together the fastest, rather than those most in need. By contrast, the new program uses an automated scoring system that gives priority to low-income businesses owners, those in poor or rural areas and the hardest-hit industries, as well as those who can show the greatest loss of revenue.

“The obvious difference is the scramble and the panic to apply and pull everything together,” said Lisa Hall Zielenski, director of the University of Scranton Small Business Development Center. “Small business owners don’t always have all their documents at their fingertips.”

Demand was high for the first round of funding, which closed July 14: Nearly 24,000 business owners across the state applied.

Karen Sawyer wasn’t one of them, even though she’s exactly who the state is trying to reach.

Before the virus struck, Sawyer, who is Black, spent months renovating her new event venue in York, redoing the floors and putting up chandeliers. The Party Palooza was open for just a week-and-a-half in March before Wolf’s statewide shutdown order went into effect.

Sawyer said she heard about the new grant program and listened to a webinar on how to apply. But, after being denied unemployment compensation and anxious that she might not be able to get her federal PPP loan forgiven, she wasn’t sure applying would be worth it.

“It just seems complicated,” she said. “I had it on the back burner to look more into it, but it’s daunting.

“I felt like I probably wouldn’t get it, anyway.”

As part of Pennsylvania’s second try to help small business owners like Sawyer, the state is contracting with a network of nonprofits, Community Development Financial Institutions, to oversee the program. They are small business lenders that focus on communities that have historically been left out of mainstream banking, and they are intimately familiar with the obstacles that small and minority-owned businesses face.

Since the new program launched, their employees have been going door to door to explain the details, leaving flyers underneath windshields and guiding business owners through the application process.

The early results are promising. Of the applications received so far, 40 percent came from minority-owned businesses, according to a spokesperson for the CDFI network.

“A lot of applicants want to have someone walk them through every single field on the application,” said T.J. Bogdewic, president and CEO of Bridgeway Capital, a CDFI that serves 15 counties in western Pennsylvania. “That’s kind of normal business for us.”

Business owners can only fill out the application online, which could pose a challenge for those without reliable internet access. But keeping everything digital makes it easier to process a large volume of applications quickly and standardize the scoring process, said Amanda High, director of strategic initiatives at the Reinvestment Fund, another CDFI.

The applications themselves are processed and reviewed by a third-party–online lending company Lendistry–not by the CDFIs, which eliminates the possibility that some organizations might have more resources or capacity to handle applications than others.

That was a problem with the first loan program, which was administered by a different set of nonprofits on a first-come, first-served basis. That meant they were racing against each other to finish as many applications as possible before money ran out.

Some counties had several of these nonprofits, while others had only one, or were covered by larger, regional organizations. A bureaucratic snafu left Montgomery County–the third-largest in the state and the first where businesses were urged to close because of the coronavirus–without one at all.

In six days, the money was gone, and the rush left many businesses in the dust.

“I never expected it to be that fast,” said Joe Lanich, one of the owners of The Laughing Owl, a specialty printing shop in McKean County that received a $100,000 loan.

Lanich, whose company employs five people, has since applied for the new grant program.

“I like that they stepped back like, ‘Let’s do this at a pace that more businesses can operate at,’” said Lanich. “I’ve seen some other programs pop up and they’re open and shut in like three minutes.”

The new program also aims to reach those who may have been left out of the federal government’s major effort to help small businesses, the $600 billion Paycheck Protection Program, which offers loans that can be forgiven under certain circumstances.

The program was designed to get money out quickly, rather than helping the businesses struggling the most, leading to public outcry over some publicly traded companies and major chains receiving loans, while many minority-owned businesses were shut out.

Although the Small Business Administration was supposed to tell banks to prioritize companies “owned by economically disadvantaged individuals,” as well as those in “underserved and rural markets,” a report by the agency’s Inspector General found that it failed to do so.

The SBA also failed to collect demographic information from applicants, the report found, making it almost impossible to analyze racial disparities in the program.

But, according to a survey commissioned by two civil rights groups, many Black and Latinx business owners struggled to get federal relief, with only 12 percent of those who applied for aid from the SBA saying they had received the full amount they had asked for.

Nearly half of the 500 business owners surveyed in early May said they anticipated they would have to close permanently in the next six months.

For a very small business, the amount of money available through the new state grant program might be more or less than PPP, “but it’s a lot simpler to understand,” said Bogdewic, of Bridgeway Capital.

Businesses can receive up to $50,000, depending on their annual revenues. Even $5,000–the smallest grant available–would be “major” for Annabell Bonilla, who owns a produce delivery business in York.

She said she would spend it on masks and gloves, which she can now only afford to buy a box at a time. She would upgrade her system for contactless payments. And she’d put some money toward maintaining her car, which she uses to make deliveries and buy tropical fruits wholesale, several hours away.

The new grant program was created to help business owners like Bonilla, who is Hispanic and self-employed. But she said she hadn’t applied, because she was having a hard time navigating the different relief options available. “You almost need to be a lawyer to be able to read through some of these things,” she said. “It makes my head spin.”

Another application window for the grant program is set to open in August.